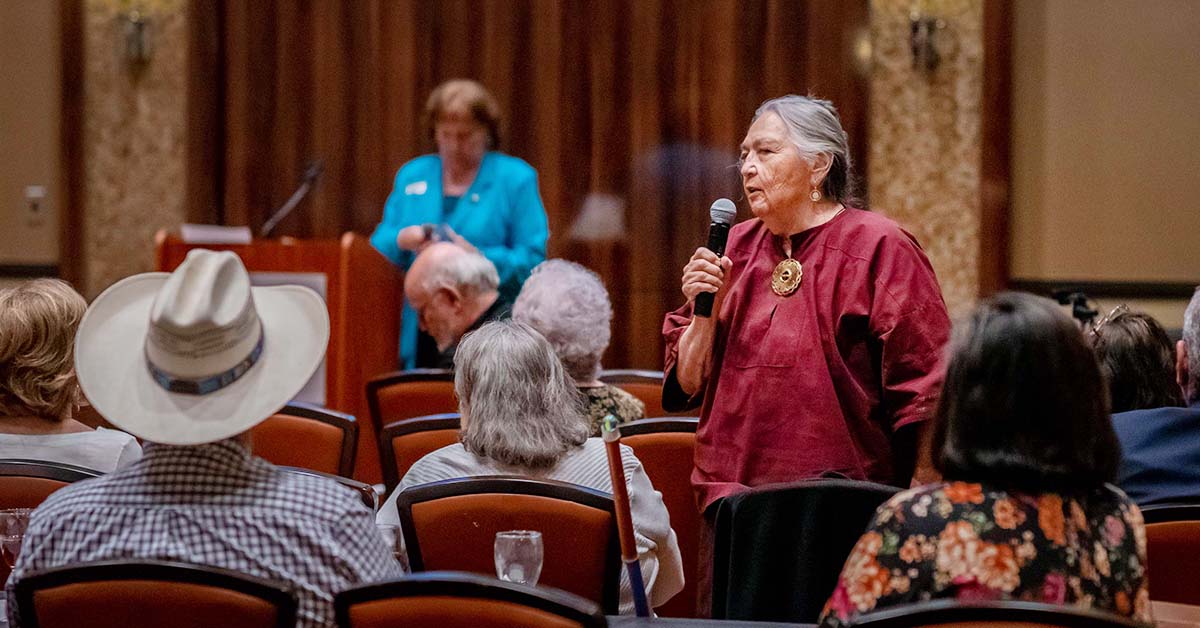 Photo caption: Rosemary Wood, a member of Annuitants for Change, addresses the attendees of the Osage Shareholders Meeting on May 19. CODY HAMMER/Osage News

SKIATOOK, Okla. — The Osage Shareholders Association is looking for a few more members.

“We need to engage the younger generation,” OSA President Lou Phillips said at the organization’s May 19 meeting at Osage Casino Skiatook.

To facilitate that goal, the organization has launched a social media presence, begun webcasting its meetings for members living outside of Oklahoma and has added an advocate position for associate members in line to inherit a share of the Osage minerals estate.

Additionally, as part of that outreach, the association welcomed a presentation from representatives for Annuitants for Change on potential amendments to the tribe’s constitution.

In order to get the proposed amendments formally before voters, either one-quarter of the tribe’s electorate has to sign a petition or at least 10 of the 12 members of Congress can vote in favor of a resolution calling for a ballot question.

“I’m asking you all: should non-shareholders have any say over our mineral estate?” Julie Malone asked, drawing silence from the assembled crowd.

“Non-annuitants should have no say in how our trust is managed.”

Among the proposed changes are adjusting references to regarding royalty payments to reflect that some of that revenue comes from non-mineral sources.

As was the case when the group presented to the Osage Minerals Council on May 3, several attendees took exception to proposed amendments that would strip the tribe’s court system of jurisdiction over civil matters involving the mineral estate.

One of the group’s members, Rosemary Wood, explained that the hesitation to allow the Osage Nation continued civil jurisdiction is because Congress, which is open to and voted on by non-shareholders, is responsible for passing those statutes. However, the explanation did not completely assuage attendees’ concerns.