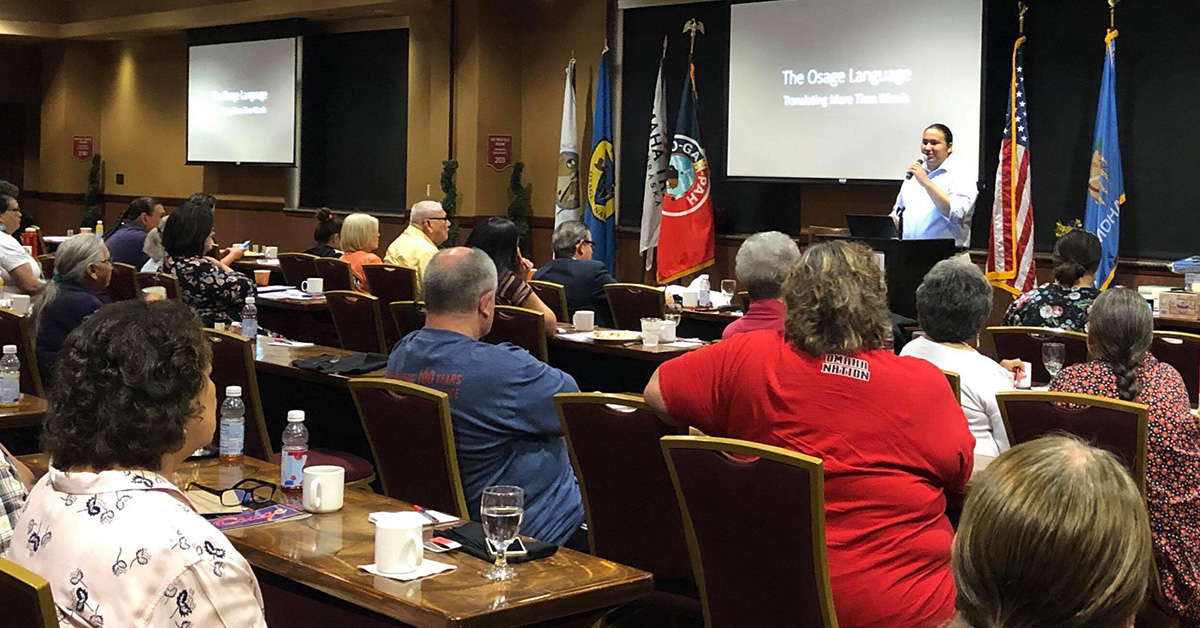 Revitalizing language for an Osage generation eager to learn

QUAPAW, Okla. – How do you teach a language that took three generations to erase?

That was the question Osage language teacher Christopher Cote posed during his presentation at the 9th Annual Dhegiha Language Conference at the Quapaw Nation’s Downstream Casino & Resort, July 31-Aug. 1.

“I always love this conference and it’s a great opportunity to network with people who speak a similar language,” he said. “It’s good to nourish these relationships we’ve shared for many generations.”

His presentation, “Osage Language: Revitalizing More Than Words,” touched on the erasure of Osage kinship relationships, the status of the language being used today in the Osage community and teaching Osage in Daposka Ahnkodapi, “Our School.”

He said the Nation has done a great job of preserving the language but now comes the task of revitalizing it.

“No one’s ever going to learn this language if all we do is preserve. We have to revive it, revitalize it,” he said. “We have to breathe new life into our language, just like we breathe air. That means we have to teach more than just animals, colors, numbers.”

He said in today’s society the younger Osage generation is eager to learn. He said his elders, like so many in Osage families, chose to turn away from the Osage culture to survive in American society, but his generation is the opposite.

“My grandfather didn’t want her [my grandmother] to speak with an accent because it would put more stigmatism to her life. They wanted her to be able to function in a modern [world],” he said. “But that’s not where we are now, it’s like the funnel is completely opposite. Now, the younger generation is hungry. They want to know Osage things, they don’t want to be identified as Osage American, they want to be identified as Osage. They want to know these things.”

Many in the audience were nodding their heads in agreement as many of them are language teachers from their respective tribes of the Kaw, Omaha, Ponca, Northern Ponca and Quapaw.

Cote said there are many modern items and events there are no Osage words for, and he would like to see the Osage language speakers that are left come together and form a committee. He said even the simplest things such as a “stapler” or “texting” do not have words.

He said the two Osage language apps that are available are a good start, but they are by no means the answer to teaching the language. He said at Daposka Ahnkodapi, if the parents don’t speak the language at home, then the students won’t speak it at school. He said it needs to be a community effort to learn and speak Osage for the next generations to learn.