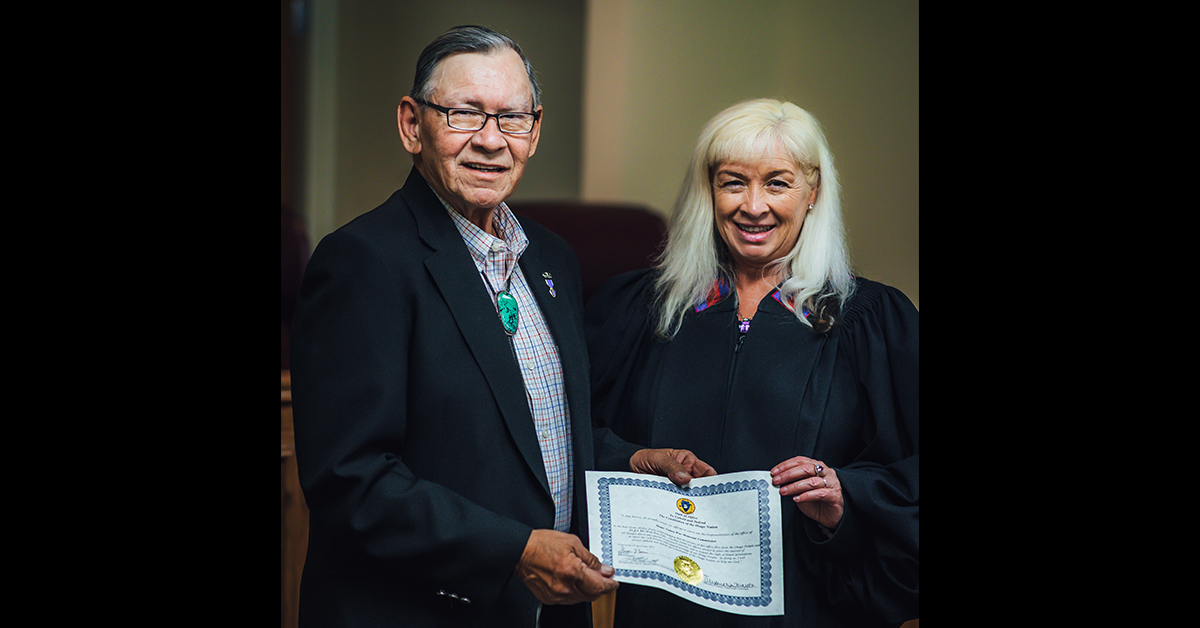 Norris joins the Osage Veterans Memorial Commission as an interim member after taking his oath on July 12 at the ON Tribal Courthouse in Pawhuska with Trial Court Associate Judge Lisa Otipoby-Herbert presiding. Norris will be considered for Congressional confirmation with other board and commission appointees when the Sixth ON Congress convenes for its 24-day Tzi-Zho Session starting Sept. 3.

With the Osage Veterans Memorial completed for a 2018 Veterans Day opening, the five-member commission will continue to oversee the structure’s maintenance and upkeep, which includes adding additional Osage veterans names each year to the memorial honoring those who served in wartime or peace. At the time of the memorial dedication, it had approximately 1,200 Osage veteran names inscribed on its walls under their respective service branches.

While serving on Congress, Norris supported the Osage Veterans Memorial project, which included a 2017 unanimous Congressional vote to appropriate $1.1 million toward the design and planning. At the time, Norris and other Congress members said they believe a veterans memorial is a place of healing and reflection for families and visitors who served in the military, as well as a place to honor those who were killed in action or passed following their service years.

Norris, a retired physician assistant and Indian Health Service administrator, served a four-year term on the Osage Congress ending in 2018. During the Vietnam War, Norris served with the 173rd Airborne and 12th Special Forces Group, according to his 2014 Congressional campaign ad in the Osage News. Norris holds a master’s degree from the University of Oklahoma and worked in several IHS director and administration posts, which included serving as CEO, Service Unit Director of the Pawnee Service Unit.

In March 2005, the 31st Osage Tribal Council named Norris along with nine other Osages to serve on the Osage Government Reform Commission, according to The Osage Timeline. Norris and the commissioners held a series of community meetings to develop the framework for the 2006 Osage Constitution approved by voters that year.

Norris’ appointment to the five-member Veterans Memorial Commission comes after two vacancies opened this year following the passing of WWII veteran and Army Capt. Richard Luttrell Sr. and the resignation of Air Force veteran Richard Perrier, who now serves on the Osage Limited Liability Company Board.