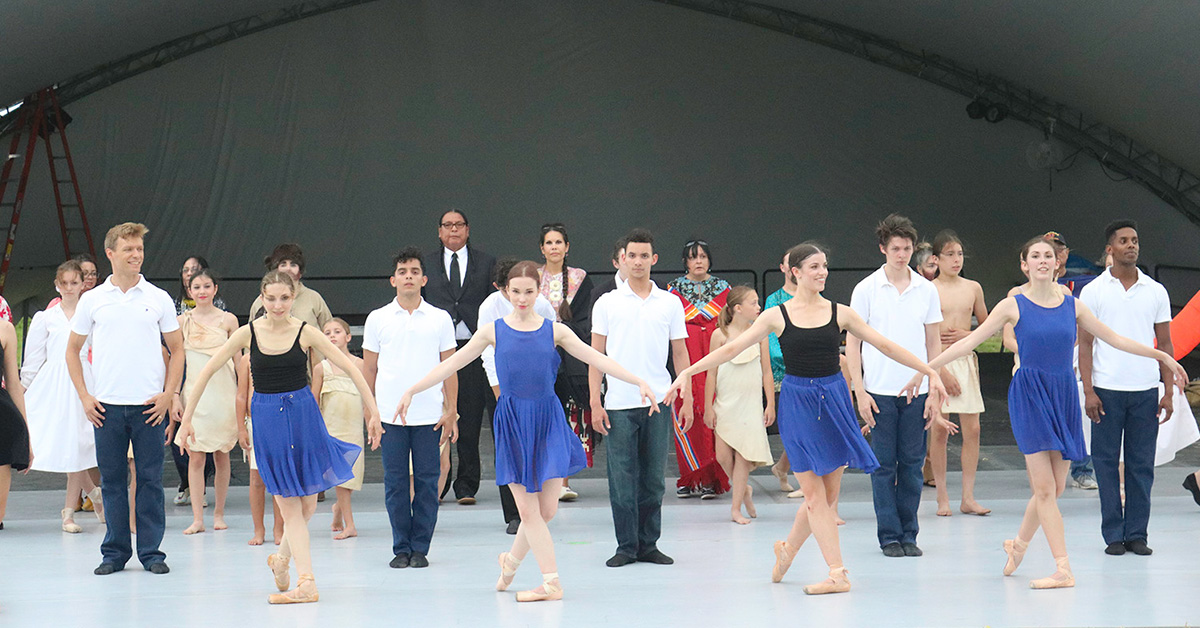 “WahZhaZhe: An Osage Ballet,” performed a dress rehearsal at the Symphony in the Flint Hills Signature event. Sponsors for the ballet’s travel and participation included the Osage Nation Foundation and the Osage Casino. The event mission imparted appreciation and knowledge of the Flint Hills tallgrass prairie as an annual showcase of the region’s heritage and beauty. A component of the event’s theme paid tribute to the Osages for ancient tradition that their origin was the stars.

Dance Maker Academy traveled from Pawhuska on June 13 to Emporia, Kans., to rehearse. The ensemble included 70 participants, including cast, crew, parent volunteers, Dance Maker student dancers, and professional ballet dancers. Among the 70 participants, seven Native American tribes were represented. Geoffrey Cote was asked to pray over the ballet and participants as they began their mission.

After three weeks of rehearsals with a full cast of dancers and actors and fitting over 100 costumes, it was finally time to perform. Wahzhazhe Ballet took the stage for their dress rehearsal. The soft wind billowed through their costumes as they presented the great Osage story in front of the lush green backdrop. The music, composed by Lou Brock, Osage, and Dr. Joseph Rivers played through a sound system prepared for 7,000 attendees to hear the rich melodies of the compositions plus the two Osage songs that are incorporated into the ballet.

Twenty children who had been immersed in the story and trained to represent their chapters took the stage with 12 professional ballet dancers. One mother, Amy Shackelford, said, "My child has learned so much about our history these last two weeks. I can read the books and tell him the stories, but you’ve given everyone a unique experience to re-enact these atrocities. It’s created a real connection for him; I’m finding it hard to put into words."

Something that had not happened in the 12-year history of Symphony in the Flint Hills. Ballet organizers received the news, "SYMPHONY IN THE FLINT HILLS CANCELLED DUE TO DAMAGE SUSTAINED IN STORMS."

The community immediately responded with heartfelt words. "We look forward to celebrating the beauty and culture of our tallgrass prairie every year of Symphony in the Flint Hills. We have the greatest sympathy for the artists, organizers, and volunteers whose year of preparation has been upstaged by the Kansas weather and the cancellation of this year's event. Thank you for your work to honor the rich tradition of the Flint Hills.”

Bartlett Arboretum welcomed Symphony in the Flint Hills tickets as admission for the Byron Berline Band concert on Sunday, June 16 at 4 p.m. They invited all to be their guests and reflect on the importance of land preservation on a wildly different historical Kansas landmark. Ad Astra!

In the Osage, you often hear the words, "Go forward." Wahzhazhe Ballet will hold to the culture and traditions of their people. They have prepared a stunningly, beautiful ballet that can be performed again. The children have been immersed in the story of their people for weeks, and that will go forward and be taught to future generations.

For more information about the WahZhaZhe Ballet, please visit: