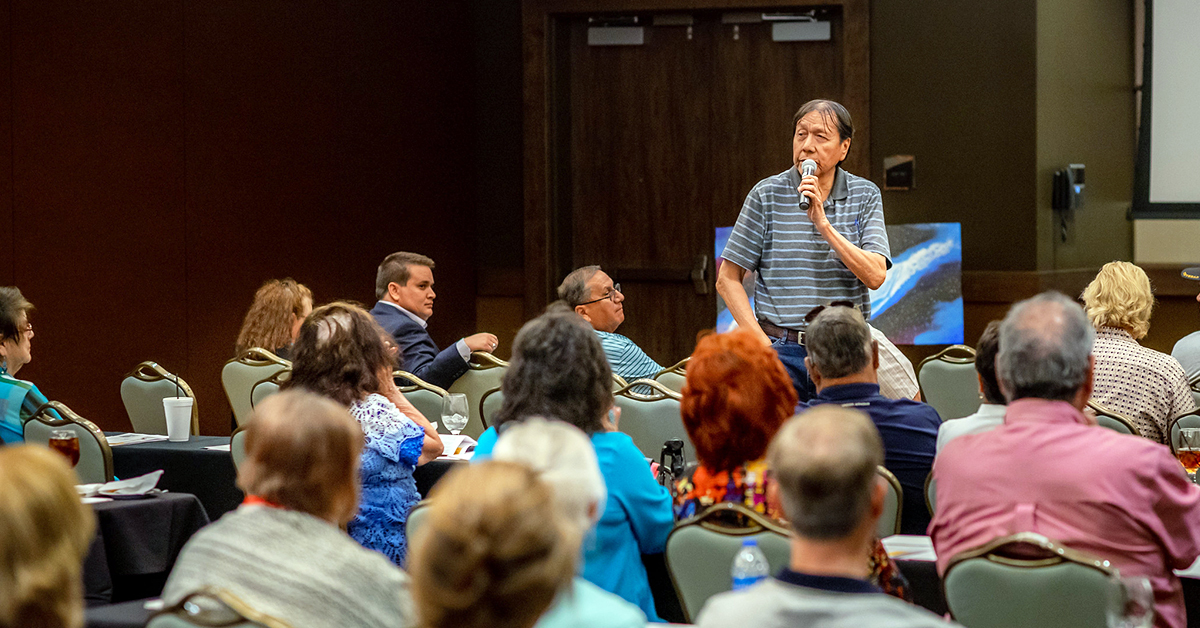 TULSA, Okla. — For more than an hour, members of the Osage Shareholders Association peppered elected officials at Osage Casino Tulsa about the possibility of a self-governance agreement involving the mineral estate.

Speaking to about 50 attendees at the Osage Shareholders Association’s quarterly meeting on Aug. 18, Osage leaders from the Osage Minerals Council and executive branch reiterated that a tribal energy resource agreement with the federal government is not a foregone conclusion for the Osage minerals estate.

First established under the Energy Policy Act of 2005, a TERA provides a tribe with the authority to review, approve and manage leases, right-of-way agreements and business agreements for energy development on tribal lands without the Secretary of the Interior’s approval.

The terms were overhauled in late 2018 to address tribal concerns regarding maintaining federal trust responsibilities while allowing tribes to better manage their properties. It also added funding provisions to, in theory, cover the costs associated with tribes taking on duties once handled by the Bureau of Indian Affairs. However, several government officials voiced concerns at the meeting over whether that money would actually appear should a tribe pursue such an agreement.

“A consideration would have to be the funding,” Principal Chief Geoffrey Standing Bear said. “We don’t want to take anything over without enough money or it would be doomed to fail.”

The comment period is open through Sept. 3 for TERA-related changes to part 225 of the Code of Federal Regulations offered by Assistant Secretary of Interior for Indian Affairs Tara Sweeney. Those final regulations are being fast-tracked and will take effect by the end of the year.

However, until those regulations are in effect, no tribe, including the Osage Nation, is in a position to enter into a TERA.

Principal Chief Standing Bear reiterated his office’s deference to the Osage Minerals Council on the matter and compared the legislation underpinning TERA to another self-governance bill that the Osage Nation has benefitted from in recent months.

Enacted in July 2012, the HEARTH Act restores the authority of federally recognized tribes to develop and implement their own laws governing the long-term leasing of Indian lands for residential, business and other purposes. Upon one-time approval of tribal regulations by the Department of the Interior, tribes have the authority to process land leases without seeking additional permission from the Bureau of Indian Affairs for each individual application.

The Osage Nation’s business leasing regulations were approved by the Department of Interior in July 2017.

“This (a TERA) could change how our property is managed,” he said. “The best example would be to look at the HEARTH Act. It’s the surface land counterpart for a TERA.”

Despite the reassurances and the possibility of additional public meetings hosted by the Osage Minerals Council, skepticism about a possible future TERA remained among some of the OSA members.

“I just don’t see this as advantageous to shareholders,” OSA member Linda Heskett said. “We will have no power or ability to sue the BIA with this. I’m very leery about this.”

In other business, OSA members will be eligible to receive a registration discount at the Osage Minerals Council’s annual oil and gas summit later this year.

Scheduled for Nov. 13-14 at Osage Casino Tulsa, the summit’s full agenda has not yet been released but will include presentations on TERA developments, spill prevention and the council’s ongoing orphan well identification project.

Tickets are $100 per person in advance and $150 at the door for non-shareholders. Tickets for shareholders are $75, with an additional $25 discount available for OSA members. Online registration will be available this fall through the Osage Minerals Council’s website.