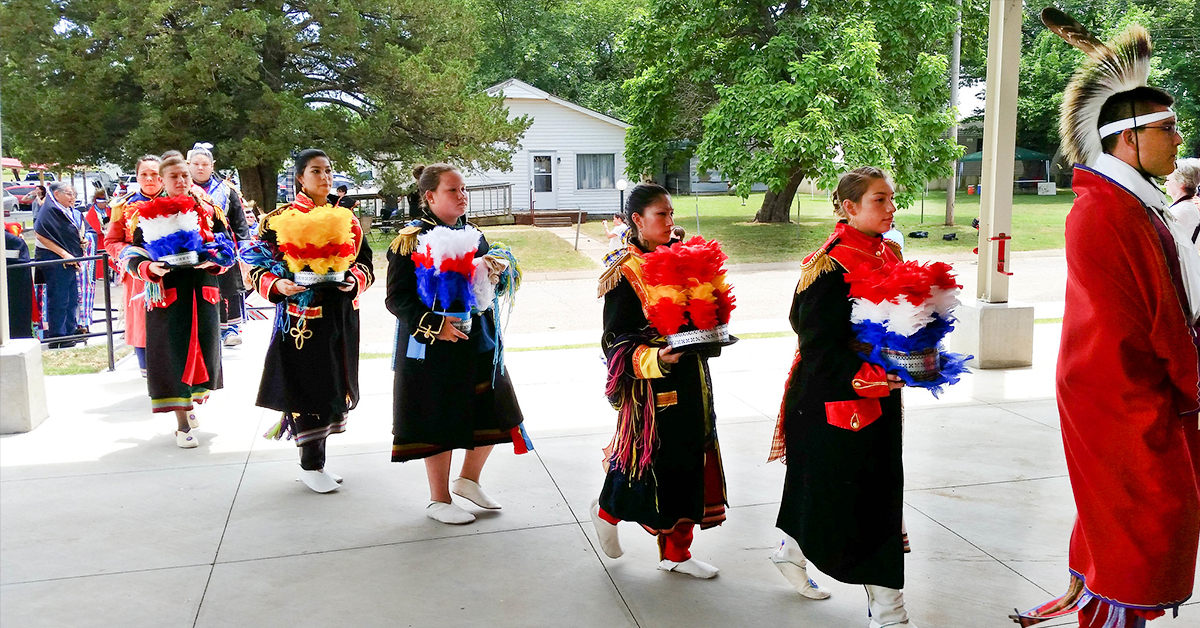 Photo caption: The Hamilton family procession walks to the dance arbor for the Paying for the Drum ceremony during the June 23, 2016, Pawhuska Inlonshka dances. The Sam Noble Museum will showcase Osage wedding coats as part of a temporary exhibit. BENNY POLACCA/Osage News

NORMAN, Okla. – In mid-September, the Sam Noble Museum will feature its new temporary exhibit, “A Giving Heritage: Wedding Clothes and the Osage Community.” Opening on Sept. 14, the exhibit features beautiful jackets, based on early 19th-century military uniforms, that have a special place among the Osage.

“Osage wedding attire is an interesting, unusual aspect of Native American culture,” said Daniel Swan, curator of the exhibit and ethnology at the museum. “The exhibit is a wonderful vehicle to delve deeper into the story of the Osage people.

The exhibition features beautiful wedding coats and hats. Military jackets and top hats, originally used as gifts from the U.S. government for Osage chiefs and leaders, were repurposed as the bridal attire worn in a traditional Osage wedding.

As traditional Osage weddings ceased to be held in the 1930s, these special wedding clothes were incorporated into the Ilonshka — the Osage form of the Plains Grass Dance. Bridal coats and hats were used in the “paying for the drum” ceremony of the Ilonshka. The wedding clothes symbolize the transfer of leadership in the dance and celebrate the virtues of hospitality and generosity.

The exhibit will feature coats used in weddings in the early 20th century as well as modern ones constructed to pay for the drum ceremony.

The Sam Noble Oklahoma Museum of Natural History is located on the OU Norman campus at J. Willis Stovall Road and Chautauqua Avenue. For accommodations, call (405) 325-4712 or visit SamNobleMuseum.ou.edu.