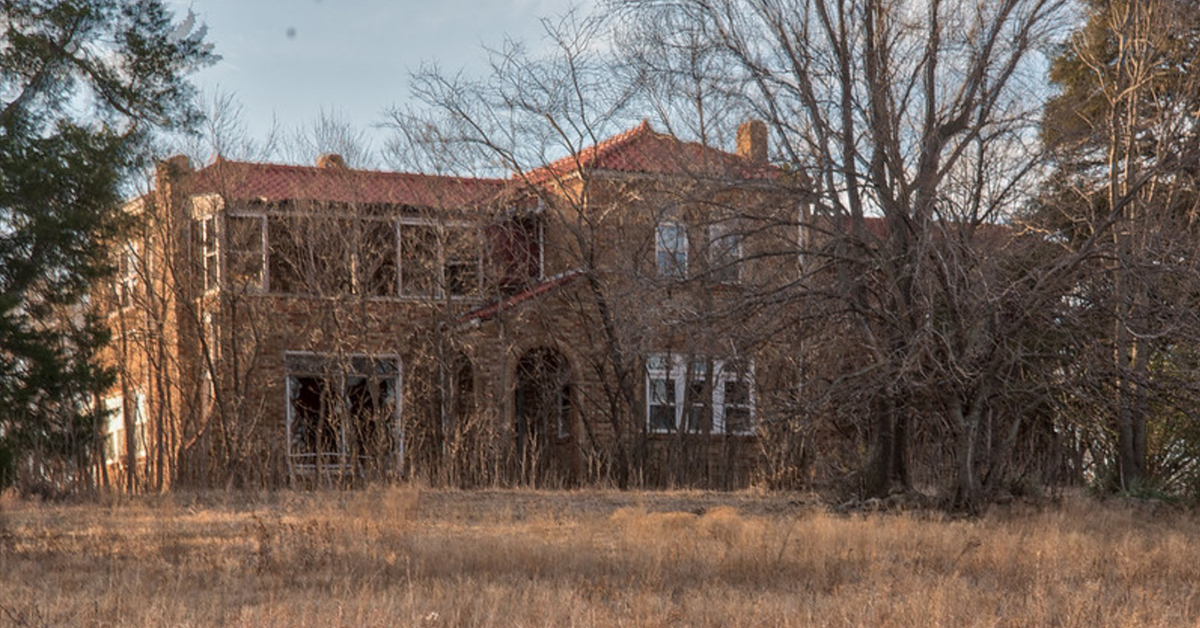 Photo credit: The childhood home of Maria and Marjorie Tallchief in Fairfax, Okla., has long been abandoned. It is commonly known throughout Osage County as the Tallchief Mansion. Photo by Pat Clancy

“The mission of Osage Impact is to be a positive voice on issues that affect the Osage way of life. We strive to advocate, educate and empower,” reads the group’s statement on its Facebook page.

Founded in 2018, the Osage Impact group has met periodically to discuss issues including ON Congressional sessions, proposed legislation and has invited Standing Bear and other elected officials to the meetings to discuss the topics and field questions.

In providing more information on the Scorsese’s film team visits to the Nation, Standing Bear noted a production team, including artistic director Dante Ferretti, visited the Nation more than a year ago when former ON Museum Director Hallie Winter was still working there. The team visited the museum one day around 3:30 p.m. “and they were looking at all the pictures, artifacts and they were taking pictures and (Winter) didn’t know they were coming.”

Based on David Grann’s bestselling book about the Osage Reign of Terror, “Killers of the Flower Moon: The Osage Indian Murders and the Birth of the FBI,” the movie project is slated for filming in 2020 with actors Leonardo DiCaprio and Robert DeNiro signed on.

Once learning of the production team’s visit, Standing Bear said he knew “we better do something” and he reached out to Osage members Chad Renfro and Addie Roanhorse to serve as ambassadors for the film project and efforts to reach out to Imperative Entertainment began.

The talks resulted in having Imperative Entertainment executives visit the Nation in January 2018 for touring the Nation’s historic sites and visiting with Osages including Grayhorse District elders Marvin Stepson and Mary Jo Webb and the executives were invited to an Osage dinner hosted by Renfro and Roanhorse, Standing Bear recalled.

At the dinner, the Imperative executives stood up and made comments including “we want to make a movie the Osage people can be proud of” and “they were going to tell the story through the eyes of Mollie (Burkhart) and how an Osage woman went through such tragedy and survived through that time,” Standing Bear said.

After the Imperative visit and as time went on, Standing Bear said he received reports that possible film location scouts were visiting area communities including Fairfax, Bartlesville and back to Pawhuska. Finally, “it wasn’t too long ago when we got a call from Chad saying Martin Scorsese wants to come look at the sites and what time can he come see you?”

When Scorsese visited Pawhuska on July 26, people in downtown Pawhuska broke out their cameras and smartphones to snapshots of Scorsese and his team as they walked the streets to view the buildings following the visit with Standing Bear.

On his visit with Scorsese, Standing Bear said: “We talked for two-and-a-half hours, he was a very interesting man. Just shortly into it, I asked a good question ‘are you going to film here?’ And he said yes. And then I turned to (producer) Emma Tillinger Koskoff and asked ‘how much of the movie are you going to film here?’ and she said ‘all of it.’”

In discussing locations around the Nation, Standing Bear referred to the vacant Superintendent’s House next to the Executive Branch and “I told Mr. Scorsese ‘if you want to use that, it needs some renovation.’”

Scorsese and his team also visited the historic Osage County Courthouse, which will be used in the film and later visited Fairfax, Standing Bear said.

Congresswoman Paula Stabler asked if the Nation has plans for tourism with an expected increase in visitors due to interest in the film and Grann’s book.

Standing Bear said he’s been in talks with Osage writer Elise Paschen, who is the daughter of the late Osage Prima Ballerina Maria Tallchief, about possibly donating the historic vacant Tallchief Mansion in Fairfax to the Nation where her mother and aunt Marjorie Tallchief grew up.

“She goes ‘well the Tallchief Mansion is falling apart, my aunt Marjorie is still alive, but we can donate to the Osage Nation that ground,” Standing Bear recalled. At that time, the Hominy Wellness Center was under construction and Standing Bear asked the construction company, Arrowhead Builders LLC, to look at the mansion.

“(Arrowhead Builders) went over there and they checked it and said it’s structurally sound,” Standing Bear said. As talks continued with Paschen, Standing Bear said he would also like to see memorials established for both the Reign of Terror victims and also for Paschen’s mother and aunt.

“I can tell you we are working on that transaction now, but it’s going to take a lot of money to fix it up,” he said. “We’re going to pursue it long-term through private funding.”

Another historic building targeted for renovation work is the ON Museum, which received a $250,000 appropriation from ON Congress during the June Special Session to begin the planning/ architectural work for an expanded building.

The idea for expanding the museum came about during a discussion with Grann who stated he wanted to see some type of memorial for the Reign of Terror victims, but not a statue. Grann visited the Nation in recent years while researching his book and became friends with retired ON Museum director Kathryn Redcorn.

Discussions with Grann then started on expanding the museum, who noted he knows potential donors in New York City who could help fund the expansion. Grann said he would need conceptual designs of the museum expansion to show those individuals and entities that may express interest in donating to the museum project.

Standing Bear then asked current ON Museum Director Marla Redcorn-Miller and Kathryn Redcorn to consult with his office on expansion plans and to hire an architect with museum planning experience.

So far, preliminary museum expansion plans call for “tripling the size and have a section for ‘In memory of those …’ for that terrible time, in our museum, but we need to take it step by step and they’re working on it, then bid it out and get the concept design, then comes the architect and engineering,” said Standing Bear.

Dr. Carol Conner, who is editor of The Fairfax Chief, also attended the Osage Impact meeting and noted the Imperative Entertainment team came to Fairfax and looked at the Tall Chief Theatre during the 2018 visit before it’s roof received tornado damage later that year. At that time, the team expressed interest in using the theatre for a movie premiere event, Conner said.

During the recent Scorsese visit, the Imperative team revisited Fairfax and Conner’s husband, Dr. Joe Conner (Osage), noted the storm damage and the Imperative people said “that’s not that big a problem,” Conner recalled. The Tall Chief Theatre was built by Alex Tall Chief in 1928 when his daughters, Maria and Marjorie Tallchief, were young and the building is now owned by the nonprofit Fairfax Community Foundation.

Standing Bear also told the Scorsese team there are lots of Osages who would like to partake in the film project. As time gets closer to filming, Osage involvement with the film will be sought at a later date, Standing Bear was told.

An email account has been established to take inquiries about the film, Standing Bear also announced during the Osage Impact meeting. That email address for inquiries is: KFMGeneral@gmail.com