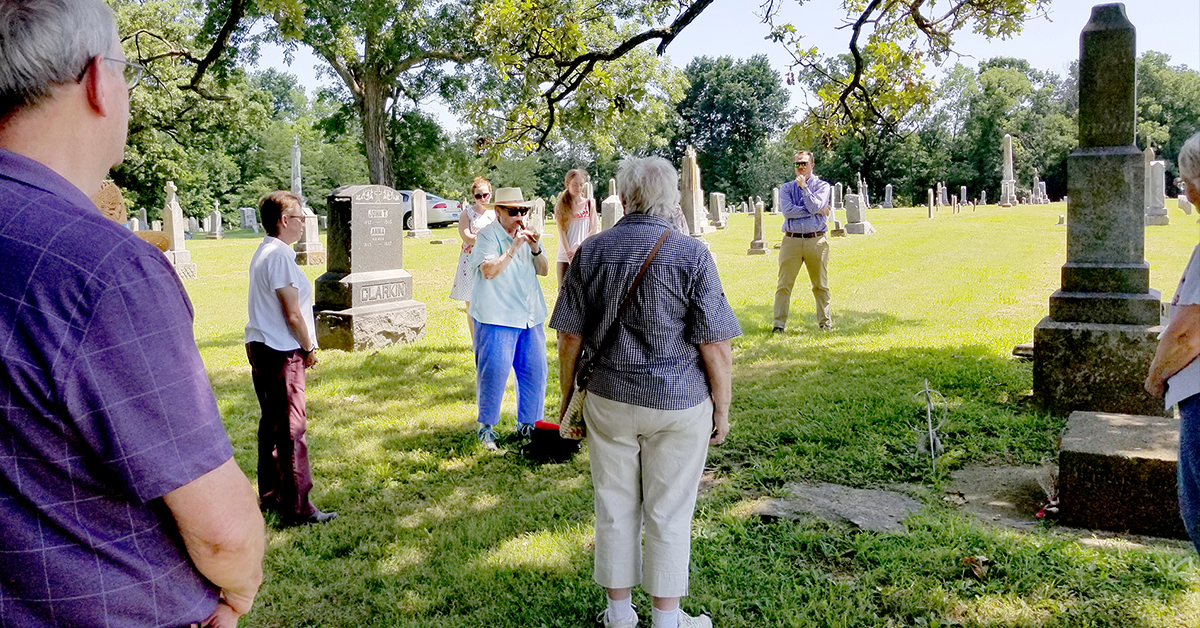 Photo caption: One of the Sisters from the Sisters of Loretto from Kentucky played flute music which she offered as a prayer at the site of the Osage mass grave in St. Francis Cemetery. Courtesy Photo/Jess Hendrix

In the cemetery of the Saint Francis de Hieronymo Church in St. Paul, Kansas, there is a small corner of the cemetery marked by two small headstones. The headstones simply say, “Indian Graves.”

In 1825 the Osage signed a treaty that ceded what was left of their lands in Missouri, Arkansas, Oklahoma and Kansas and they moved to a reservation in southern Kansas. While living there many Osages adopted Catholicism. The two headstones mark a mass grave of Osages who died while living at the St. Paul Mission in the mid to late 1800s.

The Osage Nation Historic Preservation Office staff has visited the site extensively over the years and made relationships with church officials who oversee the cemetery and the volunteer staff that maintains the Osage Mission Neosho County Museum. The Osage Mission museum is a treasure trove of information about the Osage’s time living on their Kansas reservation before their move to Indian Territory in what would become the state of Oklahoma. Catholic priests at the time meticulously documented their accounts with Osages and their changing religious customs of transitioning from their old religion to Catholicism.

Osage Nation Congressman John Maker, who currently sits on the Congressional Culture Committee, filed ONCA 19-62, an act to appropriate $20,000 for the purchase and placement of a headstone at the St. Francis Cemetery in St. Paul “to commemorate a mass Osage burial site.” He filed the legislation on Aug. 5. The 24-day Congressional Tzi-Zho Session begins on Sept. 3.

It is unknown how many Osages are buried in the gravesite. What is known is that the cemetery used to be located beside the church after 1884 but in the 1970s it was moved across the street to its current location. Felix Diskin, a volunteer at the Osage Mission museum, said in 2018 during the Historic Preservation’s Heritage Sites Visit that the Osage bodies were put in a concrete vault and reburied and there was not a record of who they were. He said the non-Indian bodies were individually reburied with headstones. He said at the time it was not something the Church liked to talk about and that the parishioners of the church were not proud of it.

The two groups were given a tour of St. Francis Catholic Church which was constructed between 1871 and 1884, and the original bell of which the Osage voluntarily helped pay for in 1876. After a lunch provided by the Osage Mission museum, Fox gave a presentation to the Sisters of Loretto about the long history of the Osage people, from their prehistoric origins to the present. The Sisters of Loretto spoke on the history of their order and their modern ministries and mission programs, according to the release.

Following a period of informal visitation, the group walked to the St. Francis Cemetery where they visited the historic graves of the Sisters of Loretto, the Jesuit priests, and the Osage mass grave. The Sisters paid reverence to the buried Osages with prayer and song. Osage elder Margaret Byrd spoke of the significance of the site to the Osage people and the importance of remembering those Osages who lived and are buried at St. Paul, according to the release.

“The day was very rewarding for all involved, including the participating citizens of St. Paul who operate the museum and maintain St. Francis Cemetery,” according to the release. “The visit resulted in a renewed relationship between the Sisters of Loretto and the Osage Nation. The Sisters graciously extended the ONHPO access to their historic archives in Kentucky, which the ONHPO will visit during their trip to the Loretto Motherhouse in December.”