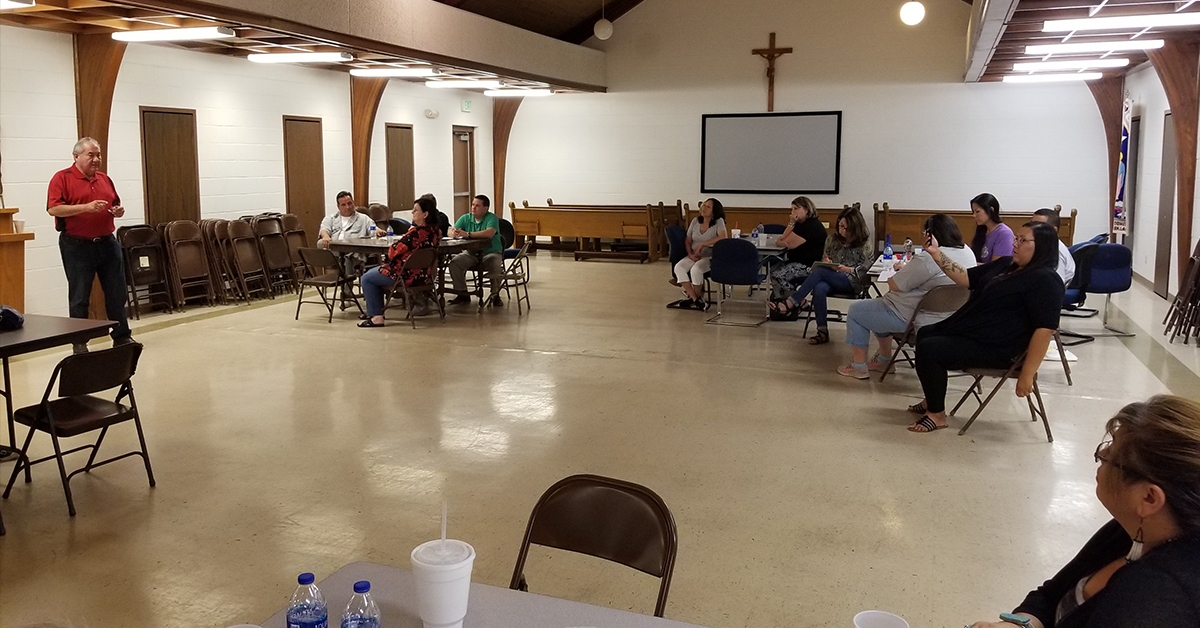 After Oklahoma Gov. Kevin Stitt’s call for renegotiating the tribal gaming compacts, Osage Nation Principal Chief Geoffrey Standing Bear said the gaming tribes are responding with a united front against the effort to increase fees to the state.

“The first thing we did is we all got together and with the Oklahoma Indian Gaming Association, which is a trade group, and we ended up at the (July) OIGA conference and setting up a tribal leader meeting,” Standing Bear said during the Aug. 21 Osage Impact citizen group meeting in Pawhuska.

The tribal leader and gaming-related meetings are a response in wake of Stitt’s letter to gaming tribes proposing to renegotiate the gaming compacts with the intent to reevaluate and potentially increase the exclusivity fees the tribes pay to the state government.

Standing Bear, along with nearly 30 tribal leaders, signed a July 23 OIGA letter standing in response to his proposal. According to the letter submitted to Stitt’s office by OIGA Chairman Matthew Morgan, the signed tribal leaders are intending “to stand united in response” to the announced gaming compact renegotiations, as well as Stitt’s argument that the gaming compacts will expire on Dec. 31.

The letter says the signed tribal leaders believe: “The present gaming compact(s) will automatically renew on Jan. 1, 2020; The rates under the present gaming compact should not change. They represent promises made by the State of Oklahoma and the tribes. Promises we intend to fulfill now and in the future and we expect the state to do the same.”

The letter also recognizes the Governor’s right to request a renegotiation of the gaming compacts and asks Stitt to “send your proposal to each and every tribe together so that we may consider any proposal as a unified body of tribal leaders.”

In a July 8 editorial published in the Tulsa World, Stitt wrote that Oklahoma’s gaming market was the third largest in the country and that tribes make an estimated $4.5 billion in annual revenue. He also wrote that Oklahoma’s current gaming compacts with tribes had the lowest revenue-sharing percentage in the country. He wants to increase the tribal revenue share from 4 to 6 percent to 15 to 20 percent.

Standing Bear has said what Stitt is proposing would devastate the Osage Nation with cuts in government services as a worst-case scenario.

In the meantime, Standing Bear said the Nation has legal counsel expertise on the matter from Dean Luthey, who is the Gaming Enterprise Board’s attorney, as well as OIGA’s legal counsel; lobbyist and attorney Ken Bellmard; Executive Branch attorney Terry Mason Moore and the Nation’s Attorney General Holli Wells.

Standing Bear said he’s also aware of a proposed ON Congressional resolution (ONCR 19-19 sponsored by Congressman Eli Potts) to reject Stitt’s claim the Nation’s gaming compact must be renegotiated. Potts proposed the resolution and Standing Bear referred him to work with legal counsel to develop the language.

After speaking with Congressional Speaker Joe Tillman, Standing Bear said it’s likely the resolution will be fast-tracked for consideration early in the 24-day Tzi-Zho Session, which starts Sept. 3.

Founded in 2018, “The mission of Osage Impact is to be a positive voice on issues that affect the Osage way of life. We strive to advocate, educate and empower,” reads the group’s statement on its Facebook page. Check the Osage Impact Facebook page for future planned meetings and other informational items.