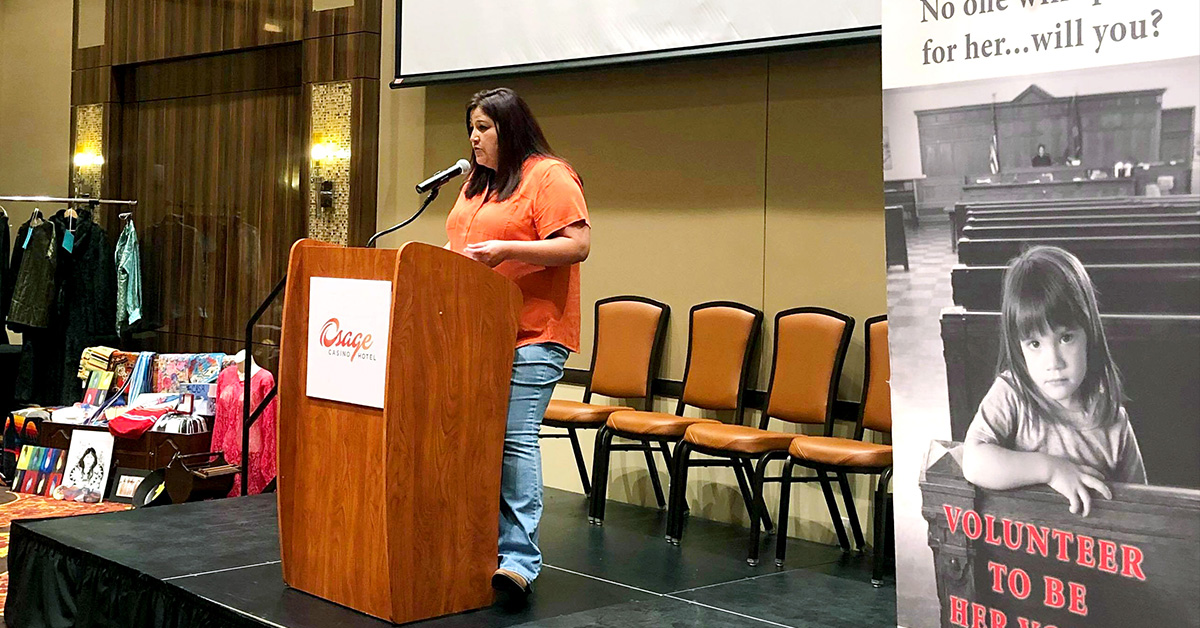 Photo caption: Jennifer Lookout gives a presentation on her personal recovery from drug addiction to a house manager for the program Gateway House. Her presentation moved many participants as she spoke about her long road to recovery. SHANNON SHAW DUTY/Osage News

Jennifer Lookout, Osage, suffered from addiction for years. She lost her home, her children and nearly her life while she struggled with the disease and everything that came with it. But her story to recovery is a success story not often heard.

She detailed her struggles and triumphs to the more than 150 attendees of the 3rd Annual Osage Women’s Conference, which is a fundraiser for the Pawnee/Osage Court Appointed Special Advocates (CASA) office. The event celebrates Osage women’s roles in culture and society. This year’s conference, the biggest yet, raised $8,200 for CASA operations.

“We are so thankful for the Osage women who came to the conference and gave their time and attention for the betterment of the children in our community,” said Osage Nation Congresswoman Paula Stabler, who is also one of the event’s organizers. “Thank You for spending the day with us and your continued support of CASA.”

The situation Lookout found herself in, as do many others, often involve their children, the court system and the foster care system. Lookout recovered from her addiction, has regained custody of her youngest daughter and is becoming closer and closer to her two older children every day.

Lookout went through the Gateway House program and the Inside Out Re-Entry Services, both rehabilitative programs for men and women with high success rates. She is now working as a House Manager for one of the programs and helping women go through the same struggles she did.

“I am more than my past mistakes. The love and support of others has shined a light for me out of the darkness,” she said. “This [Gateway House] program is life changing. Getting the word out about these resources is very important and having support to your healing is key.”

Also presenting at the conference was Courtney Neff, a member of the Grayhorse District who currently works at the Osage Nation Historic Preservation Office. She presented “A History of Women in the Osage.” Organizers also put on a play for the attendees, showing the many steps a child has to go through from the beginning of a domestic violence incident to its conclusion of the child going through the court system.

Lou Anna Red Corn, Osage, presented “Building a Road for the Journey from Victim to Survivor.” Red Corn is the Fayette Commonwealth Attorney and Prosecutor on the board of the National Children’s Alliance. She helped create the Fayette County Multi-Disciplinary team on Child Sexual Abuse and she is a founding board member of the Child Advocacy Center of the Bluegrass.

Mary Jacobs, a teacher at Daposka Ahnkodapi “Our School,” presented her personal story of “Surviving the Foster Care System.” An Osage Women’s Memorial was shown that paid tribute to all of the Osage women who passed away during the past year.

And finally, all the women were invited to put on their ribbonwork blankets, or Pendleton blankets or shawls and pose for a group photo. “You don’t have to wear a blanket, but we would like to show ourselves as we are, Osage Women,” said literature on the event’s program.

Started in 2009, the Pawnee/Osage CASA program is a nonprofit with volunteers serving at-risk children in county court and tribal court cases in both Pawnee and Osage counties. CASA volunteers are assigned to abused and neglected Native American children in the court system and monitor their living conditions, school activity, cultural activities, and general well-being and report directly to the judge handling the child’s case. Helen Norris has been the director since 2009.