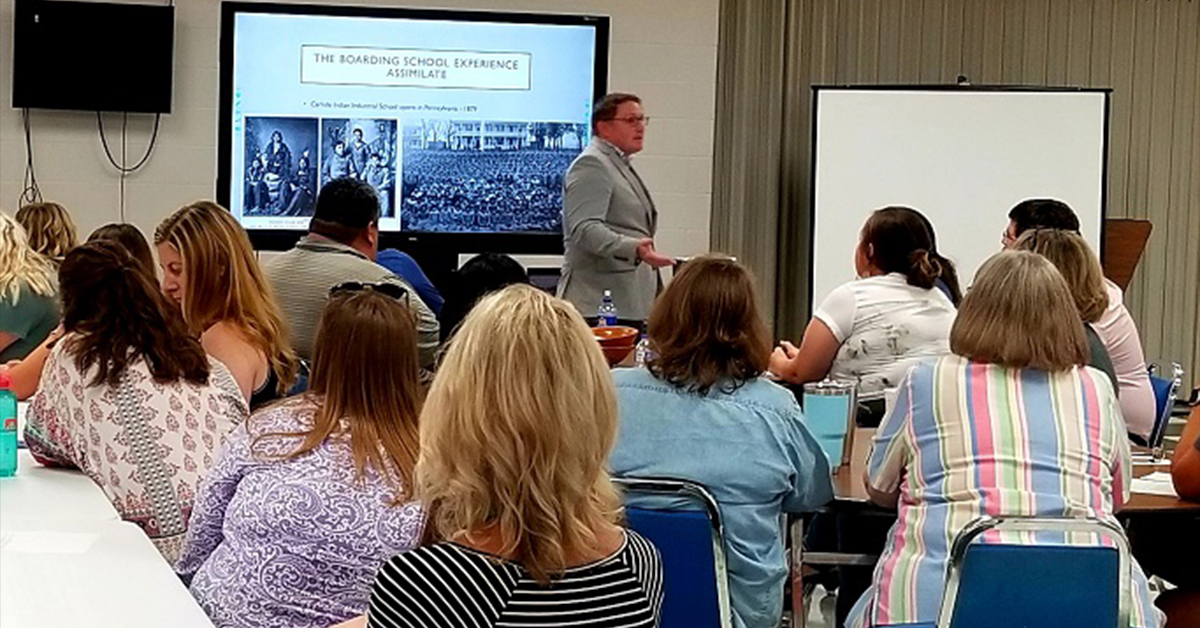 Every year before school starts, Pawhuska Public School teachers and administrators meet for professional development workshops in order to prepare for the fall semester. This year, Osage Nation representatives joined them and hosted several sessions that focused on culture, history, and education from an Osage perspective.

The school is located just a few blocks away from the headquarters of the Osage Nation. However, the collaboration between the two organizations for this type of event took many months to plan and is a special occurrence. ON Education Director Mary Wildcat hopes this meeting sets a precedent for future collaborations with the schools.

“It is up to us to speak on behalf of the Native American students in the school system,” she said.

The Aug. 21 workshop began with a discussion from Dr. Alex Red Corn, Assistant Professor at Kansas State University. His presentation, “Foundational Understanding of American Indian Issues in Education,” examined the history and development of Indian Education from the boarding school era to the present day. Approximately 93 percent of Native students are attending public schools across the country, he said. He continued by emphasizing the value of avoiding stereotypical images while teaching history and also including modern images and resources for students to understand the current issues faced by Native Americans.

Participants also heard presentations from the ON Historic Preservation Office and Education Department. John Fox, ONHPO archaeologist, presented a history lesson that included the history of the tribes’ migrations into Oklahoma. Wildcat and Coley Streater, ON Education academic advisor, showed the group how to navigate the Nation’s website and find online resources such as the higher education scholarship application and Osage lesson plans, created specifically for K-12 students.

Before the workshop ended, the educators attended breakout sessions hosted by the ON Language Department, the Wahzhazhe Cultural Center, and the Osage Nation Museum. This gave them an opportunity to learn about the latest Osage technology, such as the Language department’s two language apps, and traditional activities, like the Indian dice game. ONM staff also brought items to showcase artistry found in the Osage community.

An educational event like this is a valuable opportunity to promote positive cultural awareness in the public school system, Wildcat said. Research shows that Native students suffer high dropout rates, low self-esteem, and a lack of cultural identity due to negative stereotypes represented in textbooks and in the media, according to the National Indian Education Association’s publication “Native Nations and American Schools: The History of Natives in the American Education System.” If a public school environment is supportive of cultural diversity, it stands to reason that Native students will be more successful in achieving their academic goals.

The informational presentations included history, culture, technology, and available resources. At the end of the event, David Cash, Superintendent of Pawhuska Public Schools, thanked the ON representatives for their time and then spoke to the group of instructors.

“Almost half of our students come from the Osage Nation,” he said. “They are sharing them with us. We need to always remember that.”