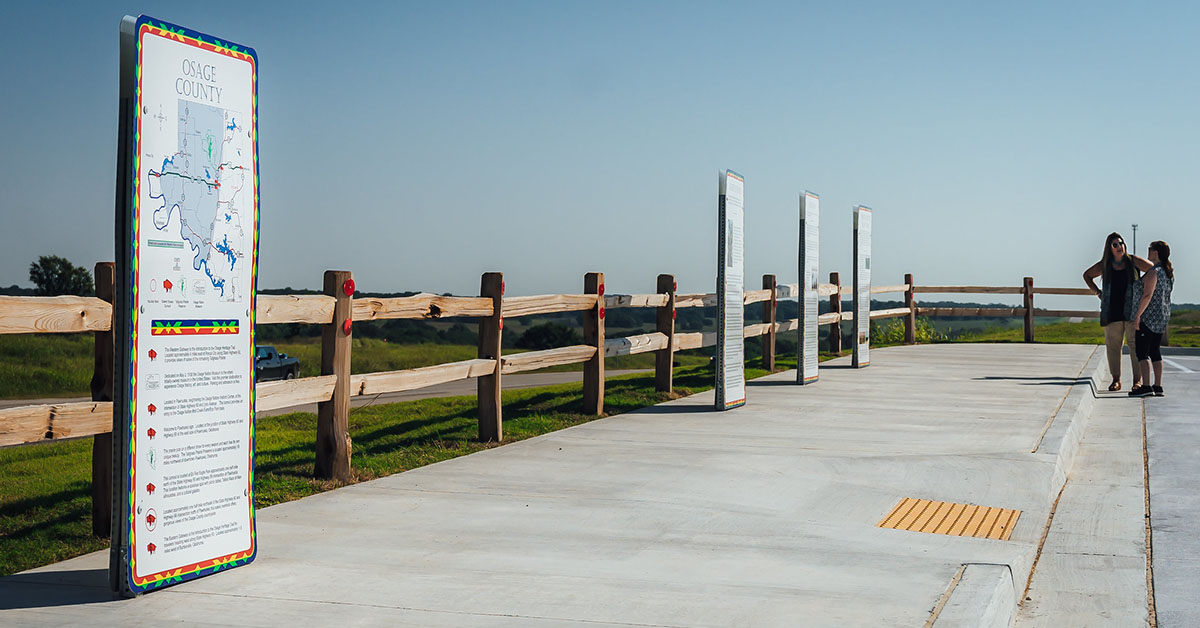 With the intent to promote area tourism, Osage Nation officials celebrated the designation of U.S. Highway 60 as the Osage Nation Heritage Trail Scenic Byway on Sept. 5 north of Pawhuska.

Thanks to grant funding, and work efforts by several entities including the Nation’s Roads Department, work crews built multiple turnout spots earlier this year along U.S. 60, which stretches 65 miles across Osage County with Ponca City to the west and Bartlesville to the east of Oklahoma’s largest county.

That toasty September morning, ON tribal officials held a ribbon-cutting ceremony at the large turnout located one-half mile northeast of the Oklahoma 99 intersection, which is six miles north of Pawhuska. The turnout includes a ranch-style overhead sign that reads “Osage Nation Heritage Trail” in the middle of a round-shaped parking lot for motorists to park and admire the rolling hills or read the informational signs at the stop regarding the county and Nation’s history.

Justin Carr, ON Roads Department director, said the ON Heritage Trail Scenic Byway designation is an effort to promote tourism and economic development in the region.

According to a news release, the Nation applied for and received a National Scenic Byways Planning Grant to prepare an Interpretive Master Plan and Corridor Plan.  As a result, the Osage Nation Heritage Trail received an Oklahoma Scenic Byways Designation. Utilizing the plans and Byway designation, the Osage Nation was awarded a federal scenic byway grant for construction. A committee was formed with various Osage Nation departments to ensure cultural and historical accuracy. Construction started in the spring of 2019 with contractor BL Construction, Inc.

Principal Chief Geoffrey Standing Bear noted the scenic byway project stretched across a number of years and acknowledged Congressman RJ Walker, who was the previous Roads Department director before he was elected to office in 2012.

In his remarks, Standing Bear recalled growing up and hearing the term “vanishing American” in referring to Native American people and remembered reading vague references to Native people as well. “As you can see today, what a different world it is, what a better world it is for all of our community that programs like this – working with the federal government, the state, the tribe, our Osage County, all working together in recognizing that the Osage is not vanishing. There’s no doubt about it when you go from Ponca City over to Bartlesville past here, you’re going to see all about the Wah-Zha-Zhe people … We’re going to make sure these are well maintained and something that all the people who come through to this area can stop and take a look at this beautiful scenery and see the trees, the prairie and the beautiful skies above us and thank God like we do, that we are here to enjoy it.”

There are also two turnouts at the eastern and western boundaries of Osage County with each entrance having an orange buffalo sign with the Osage language orthography inscribed on it. The orthography reads Wahzhazhe O.Zha^.Keh that translates to “Osage Road.”

Congressional Speaker Joe Tillman also acknowledged Walker for his work on the project in earlier years, which resulted in a prior scenic byway dedication that was held on April 26, 2008, according to Osage News archives. The 2008 dedication was held in downtown Pawhuska near the Triangle Building (now the Frontier Hotel) with several state officials joining then-Principal Chief Jim Gray and other tribal officials for that dedication.

Walker, who started with the Roads Department in 2002, said the Scenic Byway project was about 20 years in the making and recalled tribal leaders and area city and chamber of commerce officials also worked on getting the scenic byway dedication. “In 2004, there was a new highway reauthorization that allowed for tribal scenic byways, so once that became a possibility, I thought why not take up some of this work that other community leaders and tribal leaders have worked on in the past and put forth an application and go for it?” Walker said, adding “I am so excited and proud of what we developed.”

“It was a collaboration of all the stakeholders, the communities, the Osage Nation and to me, this provides us opportunities for funding or many other things to go along with tourism and other things that are going to help in this area,” Walker said. He acknowledged other Osage officials who worked with him on the scenic byway project including Candy Thomas who helped with the grant writing; Assistant Principal Chief Raymond Red Corn who served on a county tourism committee at the time; and Congresswoman Paula Stabler, who served as Communications Officer with the Gray Administration and helped organize the 2008 dedication.

There are multiple turnout locations along the byway with informational panels highlighting four principal themes: Osage Heritage, Oil Heritage, the Tallgrass Prairie, and Ranching Heritage in the Osage, the news release stated.