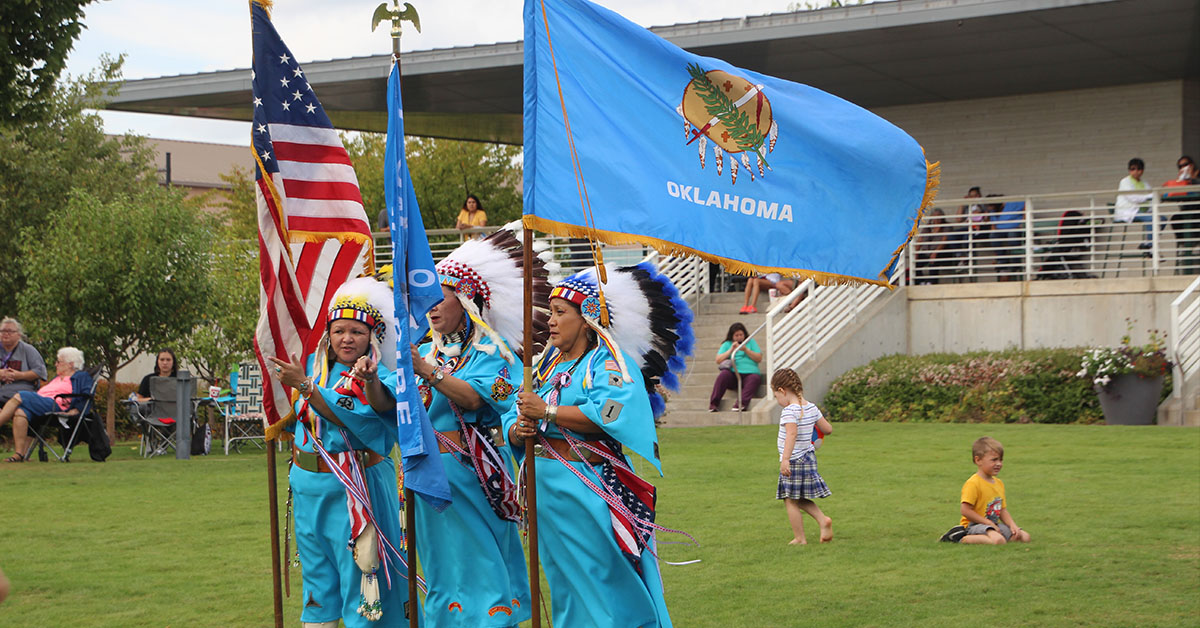 Photo caption: The Color Guard at the 2018 Native American Day celebration in Tulsa brings in the flags. LENZY KREHBIEL-BURTON/Osage News

Columbus Day may still be a federal holiday, but Oklahoma’s two largest cities have other plans in mind for Oct. 14.

In observance of Native American Day, Tulsa’s Guthrie Green will host free activities all day on Oct. 14, starting with a proclamation from the city’s mayor, GT Bynum, at 9 a.m.

Principal Chief Geoffrey Standing Bear is scheduled to participate, as are leaders from the Cherokee, Muscogee (Creek), Pawnee and Kaw nations.

A parade is scheduled for noon. Post-parade activities include dancing led by a Chickasaw troupe, a performance from the Cherokee National Youth Choir, a screening of “Osiyo: Voices of the Cherokee People” and a performance from Comanche flutist Tim Nevaquaya. vendors, food trucks and artists will also be on-site throughout the day.

At the request of the Greater Tulsa Indian Affairs Commission, Tulsa made the switch in 2017 from Columbus Day to Native American Day with unanimous support from its city council.

Meanwhile, down the Turner Turnpike, Oklahoma City is preparing for its second Indigenous People’s Day celebration.

Mayor David Holt, a citizen of the Osage Nation, is scheduled to start the day with a proclamation at 11:30 a.m. in Oklahoma City University’s Chickasaw Sculpture Garden.

OCU will also host a drumming and dancing exhibition, lunch, a social stickball game and a panel on the LGBTQ and two-spirit experience.

The day is scheduled to close at 6 p.m. with hand games and a youth panel at the Sovereign Community School, a new Indigenous-centered charter school on Oklahoma City’s north side.

Oklahoma City began observing Indigenous People’s Day in 2018 after Holt signed a proclamation to enact the change. The Oklahoma City City Council previously rejected two requests on the matter, with objectors claiming that the issue is one that needs to be decided at the federal level rather than the local level.