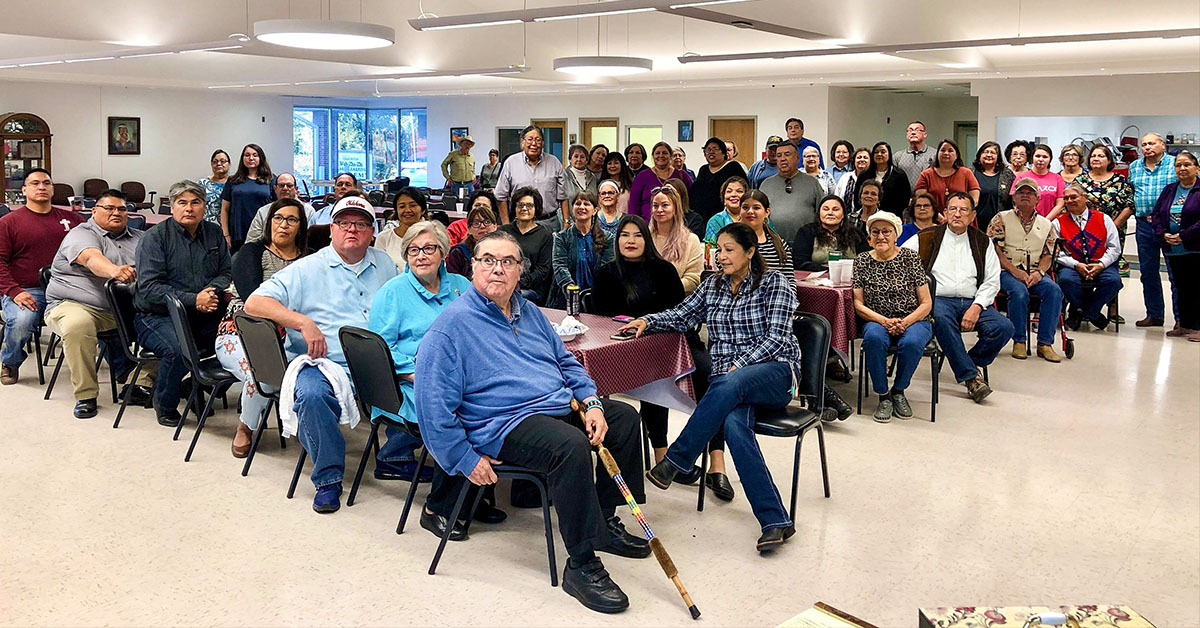 Photo caption: Attendees of an Oct. 13 Grayhorse Community meeting gather for a photo. Most of the attendees have agreed to sign a letter requesting a meeting with filmmaker Martin Scorsese. SHANNON SHAW DUTY/Osage News

FAIRFAX, Okla. – If a film is being made about the systematic murder of Osages from the Grayhorse District, then that story should be told by Grayhorse Osages. That was the message from an Oct. 13 meeting attended by 85 people from the Grayhorse community.

Organized by Osage/Otoe-Missouria attorney Wilson Pipestem and others, many attendees gave their opinions about the best-selling book by David Grann, “Killers of the Flower Moon: The Osage Murders and the Birth of the FBI.” Some individuals spoke about how the book affected them, how the upcoming film will change their community and some expressed concern about the process the filmmakers have taken in telling their story.

Although the film is currently in pre-production, some of the meeting attendees voiced their objections to Osages from the Pawhuska and Hominy districts working with filmmakers. They claim the Grayhorse community’s voice has not been heard.

“If this story is to be narrated by an Osage woman, a woman from Grayhorse, then they don’t need to be speaking with people from Pawhuska, with all due respect,” Pipestem said.

That “Osage woman” is Mollie Burkhart, whose sisters Anna Brown and Rita Smith and mother Lizzie Q. Kyle, were murdered by white men who carried out a plot to kill Osages for their headright money by their uncle William Hale. Brown’s killing is the first murder described in the book.

Pipestem stressed he had the utmost respect for his “relatives” from Hominy and Pawhuska, but it is Osages from Grayhorse who should help shape this story.

“What do you think of writing a letter to Martin Scorsese and we all sign it tonight,” Pipestem said to cheers and clapping.

At the culmination of the nearly three-hour meeting, Pipestem began drafting the letter to Scorsese that requests a meeting with the Grayhorse community. Nearly all the attendees of the meeting agreed to sign the letter. They also agreed to meet again in one month.

Renfro said that from the outset in January of 2018, officials from Imperative Entertainment, and Scorsese’s Sikelia Productions, have been introduced to Grayhorse families mentioned in the book and they have all been taken to Grayhorse and to the Whitehair Memorial.

“Not once did the Chief's Office or the ambassadors tell anyone they cannot be involved.

"The opposite is true, in that the goal is to include as many Osages as possible in the discussions, projects and opportunities,” he said. “There were some groups, which have Osage members, that were informed by Imperative Entertainment that they had already developed a working relationship with the Osage Nation through the Chief's Office. The Osage voice as a whole in this process has not been repressed.

“In fact, it has been highlighted again and again by Imperative Entertainment, the production team of Scorsese and especially the Chief's Office and ambassadors.”

He said if his schedule allows, he will attend the next Grayhorse community meeting.

Location scouting has been ongoing since May of this year since Scorsese and Dante Ferretti attended the Grayhorse Community Building groundbreaking, Renfro said. Filmmakers have asked about the usage of Nation’s properties.

Osage Nation Speaker of the Congress Joe Tillman, Grayhorse district, said at the meeting he was introduced to filmmakers and was told they would be using Osage Nation-owned buildings for free. This information was not received well by the attendees.

“The main goal of the offering of Osage Nation-owned buildings to the producers is for economic development and growth of the Osage Nation. There are many challenges to filming here based on our geographic location and unique circumstances. We are working to add value and incentive to filming here while enhancing the Nation's properties, without contributing to the State's fund or giving anything for free,” Renfro said.

“Vacant buildings such as the former flight school and gaming offices west of the Tulsa Casino and Superintendent’s House, as well as the occupied First National Bank building are some of the properties being considered,” he said.

He said the Nation is not involved in the location scouting for the film and the scouts have also contacted individual Osages and other property owners for the usage of their lands and homes for the film.

Pipestem likened the impact of the upcoming film to “Dances with Wolves,” and “Little Big Man.” He asked the attendees if anyone had ever seen those two films and the audience laughed. Those two films are staples in many Native American households throughout Indian Country. But neither of those films are true stories, and neither of those films had the violence and murder that will be depicted in Flower Moon. Another attendee likened the impact to the Osage community that Steven Spielberg’s “Schindler’s List” had to the Jewish community.

“Some of these things are hard to talk about, and some of you may have been told not to talk about them,” Pipestem said. “But now we have millions of people and their eyes will be turned toward here.”

Pipestem said the meeting was organized because a discussion needed to be had among the community members. Anthony Webb, Judge Marvin Stepson, Margo Gray, Johnny Williams, Jerry Shaw, Cecelia Tallchief, Randolph Crawford, Talons Goode, Michael Irons, Judy Tiger, Wendy Ponca, Joe Tillman, Tim Tallchief, Danette Daniels, and Veronica Pipestem, all stood up and spoke about the impact the film could have in Grayhorse, what they thought about the book, the Osage experience, and how the murders affected their families.

Teresa Bates Rutherford, the great-granddaughter of Joe Bates Sr., whose murder is described in the book, said she hasn’t read the book yet because she’s not ready. Her great-grandfather was poisoned with strychnine and died in front of his family in 1923 – he was killed for 40 acres of land.

“Some things are still just too hard for me to talk about without crying,” she said. “I had my grandfather until I was 30 years old and he told me stories growing up about how hard it was to lose his father at the age of 15. He quickly had to become the man of the house and his youngest of five siblings was just two years old.”

Frank Wootan, a white man who grew up in Grayhorse and whose ancestors came to the area in the late 1800s, stood up in front of the crowd and said he knew Bryan Burkhart, one of the murderers of Anna Brown. He said he knew Burkhart “quite well.” He said he was a young boy when Burkhart showed him and other young boys the site where Brown was murdered. He said the book got it wrong because there were two gunshots that night, the first went into Burkhart’s leg, giving him a permanent limp. The other killed Brown.

He went on to say that he knew and grew up with many Osages and their families.

“I can honestly say, no one in my family has ever harmed an Osage,” he said.

Pipestem said he has friends in the film industry who know DiCaprio and that it was his hope that DiCaprio would stand up for the Osage community and ensure the Osage are not depicted as drunks or incompetent individuals who could not handle their money.

“There are ways in Hollywood to depict people accurately and hold people accountable,” Pipestem said. “I won’t accept we won’t have a voice.”

Disclaimer: Editor Shannon Shaw Duty is a member of the Grayhorse District.