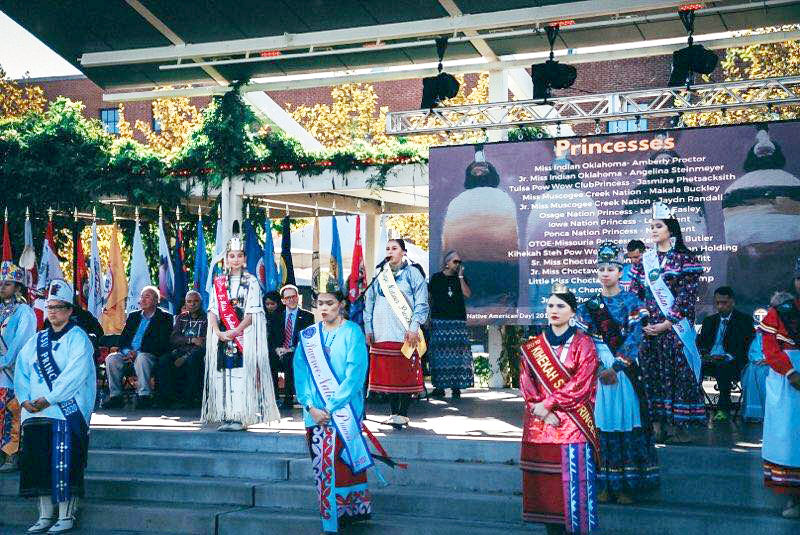 Along with dance and drum exhibitions, attendees were treated to a parade through downtown Tulsa, a performance from the Cherokee National Youth Choir and a screening of “Osiyo: Voices of the Cherokee People.” Participants also had the option to help make a community mural with local Indigenous artist Yatika Fields.

At the request of the Greater Tulsa Indian Affairs Commission, Tulsa made the switch in 2017 from Columbus Day to Native American Day with unanimous support from its city council. The Muscogee (Creek) Nation, Cherokee Nation, Osage Nation and the United Keetoowah Band of Cherokee Indians all lay claim to part of the Tulsa city limits.

Calling it an obvious move that should have happened years ago, Tulsa Mayor GT Bynum called the celebration an acknowledgment of the city’s history and position within Indian Country.

“There are few cities with such a great opportunity like Tulsa,” he said. “We’re at the intersection of three great tribes: the Muscogee (Creek) Nation, the Cherokee Nation and the Osage Nation. As they grow, Tulsa grows. We’re one and the same.”

Principal Chief Geoffrey Standing Bear echoed Mayor Bynum’s comments, emphasizing the economic partnerships that have developed over the years between the city and area tribes.

“We’ve invested more than $200 million of our own dollars into Tulsa,” Principal Chief Geoffrey Standing Bear said. “Many of our employees are not Native. We’re contributing to the community through jobs.”

Indigenous People’s Day celebrations were also observed in Oklahoma City. Mayor David Holt, a citizen of the Osage Nation, read a formal proclamation at Oklahoma City University’s Chickasaw Sculpture Garden to kick off the day. OCU also hosted a drumming and dancing exhibition, lunch, a social stickball game and a panel on the LGBTQ and two-spirit experience.

Oklahoma City began observing Indigenous People’s Day in 2018 after Holt signed a proclamation to enact the change. The Oklahoma City City Council previously rejected two requests on the matter, with objectors claiming that the issue is one that needs to be decided at the federal level rather than the local level.