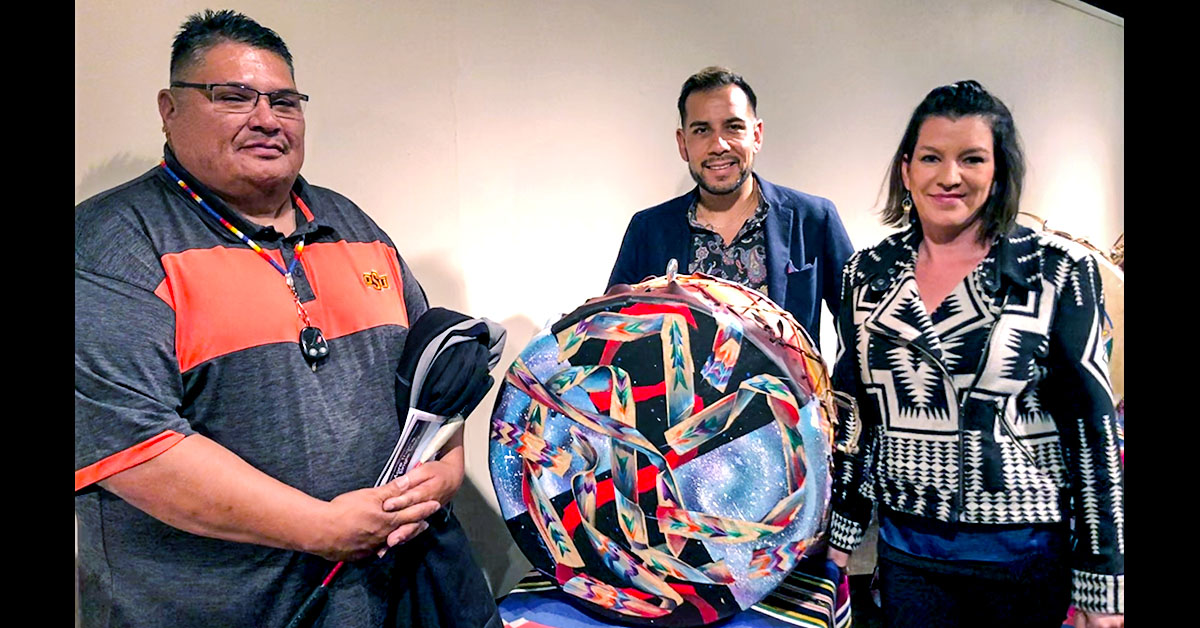 A collection of Osage drums is on exhibit through Oct. 25 at the University of Denver in Colorado for its first appearance outside of the Osage. "Voices From the Drum: An Osage Collection" features traditional Osage drums painted and personalized by Osage artists from across the nation. An opening reception on Oct. 11 featured artists Addie Roanhorse, Yatika Fields and drum-maker Rock Pipestem.

The artists shared their creative process in the creation of their pieces, as well as the ways the project has impacted their lives. Pipestem, who created each of the 19 wood and buffalo-hide drums by hand, said the project has brought "massive blessings" to his life and helped him become a better drum maker, singer and citizen of the Nation. The reception featured a film on the project created by Osage-owned Buffalo Nickel Creative. The event was catered by Ben Jacobs, Osage, owner of Tocabe, An American Indian Eatery in Denver. Jacobs attended the reception with his family.

A project of the Osage Nation Foundation, the exhibit was invited to be part of the Indigenous Film and Arts Festival in Denver. David Conrad, Osage, is on the board of the festival's parent organization, the International Institute for Indigenous Resource Management. Conrad asked Jeanne Rubin, General Counsel for the institute, if the drum exhibit could be featured in the festival in partnership with the Osage Nation Foundation. The foundation's executive director, Bill Webb, said transporting the large drums to Denver was a significant logistical challenge but well worth the effort. The foundation hopes to bring the collection to other venues to build awareness and understanding of Osage culture and tradition. The pieces are part of the Osage Nation's permanent art collection.