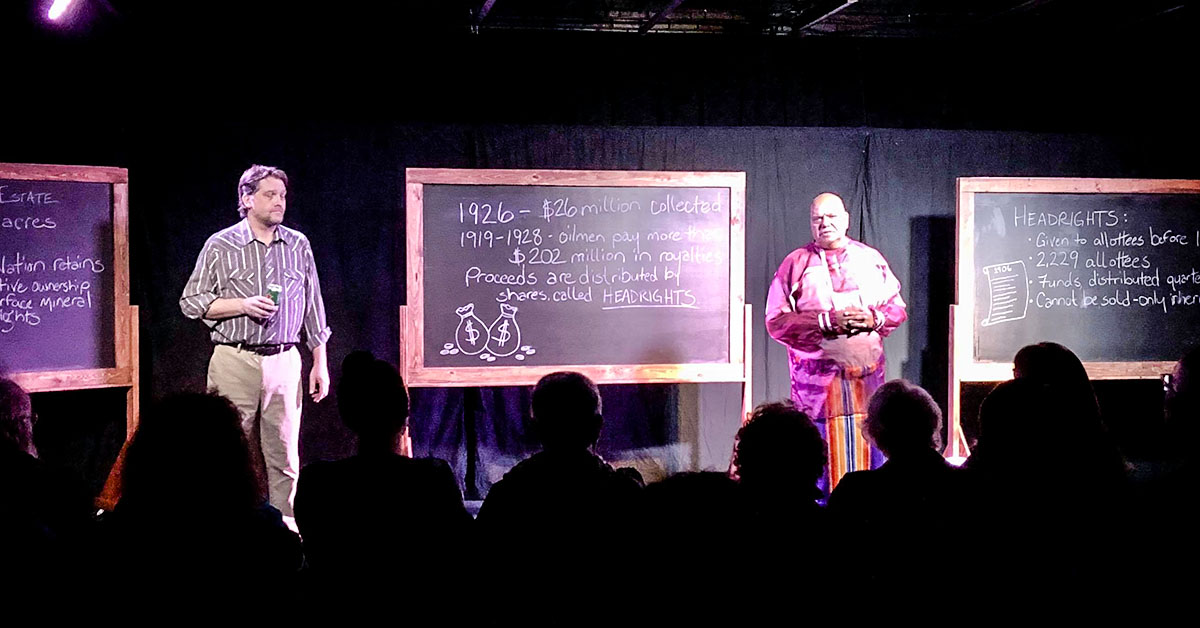 Revisiting an Osage murder: 'The Deaths of Sybil Bolton'

TULSA, Okla. – Funerals can be a time of healing. When families laugh together as they grieve, they sometimes laugh even harder because it feels wrong.

Award-winning playwright and director David Blakely counts on the power of that transgressive laughter to fuel the emotional journey of The Deaths of Sybil Bolton, a play adapted from Dennis P. McAuliffe Jr.’s 1994 book of the same name. The play is currently running at the Heller Theatre Company.

Blakely does justice to this powerful and diabolically complicated history, making a strong play from a memoir that is a family history, a murder mystery and a cultural commentary.

Sybil Bolton is 21 when she learns that her Osage trust accounts have been plundered by her stepfather, and guardian, A.T. Woodward. She’s murdered outside her home in Pawhuska while holding her one-year-old baby, Kathleen, McAuliffe’s mother.

For 60-plus years, Kathleen believes her mother died from kidney failure. That belief continues until McAuliffe travels to Pawhuska and is told by an aging local barber that his grandmother shot herself. An assistant editor for The Washington Post at the time, McAuliffe begins to research her death and he uncovers the machinations of the Reign of Terror. As the story unfolds, all clues point to murder.

McAuliffe examines his family’s internalized racism, deals with episodes of problematic drinking, contextualizes the racism that Osages face, and examines the systematic murders of multiple Osages and the cover-ups that allowed them to continue. He comes to understand how his grandmother was killed. He covers a lot of ground, and Blakely, who holds an MFA from the Iowa Playwrights Workshop, weaves the threads into a full-length play that grew from Four Ways to Die, a one-act play that won multiple awards for Theater Excellence in 2018.

Quinn Blakely, an award-winning actor who says he hopes to be a strong playwright like his father David, plays Bryan Burkhart (William Hale’s nephew and accomplice), dispassionately reporting details of the murders, reciting atrocities with the kind of matter-of-factness with which they were carried out in real life. “Do you need to get shut of her?” he asks Woodward. There’s irony in the good old boy portraying the murderer, the cowboy audiences are conditioned to root for. He segues from a chatty character into an explanation of how Uncle Billy would provide for him after he provides for [his brother] Earnest with the headrights of murdered Osages.

Burkhart’s character offers the most range, as he changes from a jovial cowboy to “just creepy,” as Quinn Blakely says. Actor Paulette Record, playing Kathleen Bolton, Denny’s mother, generates the most suspenseful moment when she asks Bryan, “Did you kill my mother?”

To write about an alcoholic Indian requires finesse to avoid reinforcing or trafficking in stereotype. That said, addiction is an important part of McAuliffe’s memoir. Steve Barker, an actor who has worked with David Blakely in other projects, creates a likable self-deprecating Denny, bringing emotional integrity to the role. McAuliffe wrote an honest book examining his drinking, even worrying about dishonoring Osages with his problem. Blakely stays close to the text, skillfully shaping the script. Barker drinks beer throughout the play, and like an alcoholic family in real life, the audience waits for the next shoe to drop in this increasingly tenuous situation. Barker slurs his words and walks with the loose gait of a person under the influence. He hands empty beer cans over the transom one after another. The beer cans offer opportunities for strong stagecraft that punctuates the play. While the drinking is almost overdone, it offers a moment of connection when the audience learns that Denny has been 25 years sober.

The play tackles a difficult subject for Osages. The unabashed evil among the whites who lived and whose descendants still live in Osage County is painful to witness.

Blakely attempts a delicate balance in using humor strategically. It’s true that opening up an audience to feeling via humor can make the painful moments more keenly felt, but as an Osage, I wondered if the white-looking man seated beside me, guffawing loudly, fully realized the depth of the horror before him.