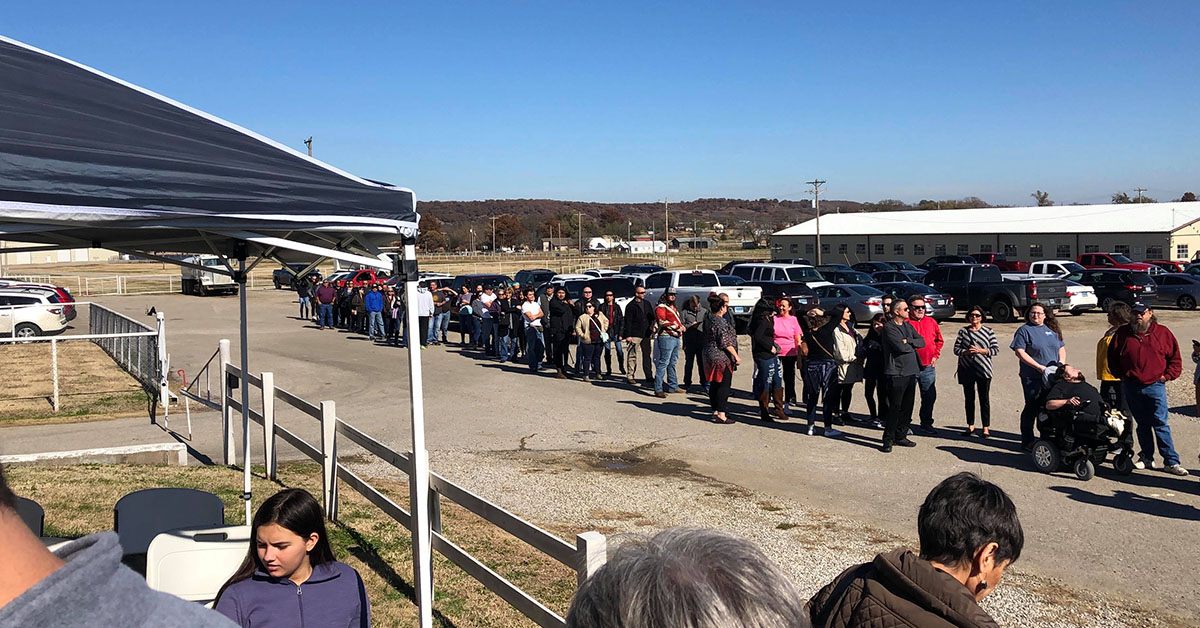 Photo caption: Osages and area citizens wait in line to audition at the Osage Community Casting Call for the upcoming film “Killers of the Flower Moon” outside the W Building at the Osage County Fairgrounds in Pawhuska on Nov. 9. SHANNON SHAW DUTY/Osage News

The Osage Community Open Casting Call felt more like a family reunion than tryouts as Osages from all over the country descended on Pawhuska for a chance to be in the upcoming film “Killers of the Flower Moon.”

The film, based on David Grann’s bestselling book about the 1920s Osage Reign of Terror, is sure to be a megahit with famed director Martin Scorsese at the helm and stars such as Leonardo DiCaprio and Robert De Niro signed on to the project. No other casting decisions have been made public at this time.

Nearly 700 people came to the casting call Nov. 9-10 at the Osage County Fairgrounds in Pawhuska, with some traveling as far as the state of Oregon and some waiting for more than four hours to audition.

The Norman-based Freihofer Casting conducted the event, which is also the company that conducted the extras casting for the 2012 film “To the Wonder,” which was also filmed in Pawhuska, according to IMDB.com. The process included filling out paperwork that included questions about the individual’s knowledge of traditional songs or the ability to speak the Osage language. Measurements were taken and photos. Some people were selected to read for speaking roles and some were called back for second readings.

Sheldon McNiel II, 40, traveled from Kingston, Okla. He is the grandson of one of the last eight full blood Osages, Elda June “Kimmie” Morrell McNiel. He said he found out about the casting call through family. He asked his grandmother if she wanted to go to the casting call but she chose to go to her niece’s house instead, he said smiling.

“I want to be in the film to be a part of history. Also, to leave something for my kids and to just bring awareness to the Osage people.”

Cate Haney, 61, is from Hominy but currently lives in Choctaw. A portrait of her father Bell Charles Haney currently hangs in the Osage Nation Museum.

“The main reason why I want to be in the movie is to honor my ancestors. I’m Osage and I was also a theater major and I’ve been in a film before, I was in ‘My Heroes Have Always Been Cowboys,’” she said. “I’ve resisted reading the book, just because I feel like it’s just going to make me sad, or I’m going to feel the pain too much.

“I heard a few stories growing up and I have read ‘The Deaths of Sybil Bolton’ and that was really good, that affected me quite a bit, but I have not read anything since then.”

Talons Goode, 47, came from Fairfax to attend the casting call. The FBI investigation into the Osage murders takes place mostly in Fairfax in “Killers of the Flower Moon.” Goode attended the Grayhorse Community meeting on Oct. 13 about the book and film and said things haven’t changed much for Osages living in Fairfax.

“I just hope they represent us right. My brother wanted to be in the movie so I figured brothers would be better than just one of us,” he said. “But, as I said at the meeting, I hope everyone’s ready for the fallout. I was raised on all the stories. My grandmother lived through it. I can see that we’re getting treated the same way, it’s just a slicker way. But, you know there’s no other place for me to run to, I’m just an Osage. Everybody else, they can just go to some other tribe, and that’s their deal, but I’m stuck here. So, if I don’t try to make a difference, I don’t know who else is.”

Montana Martin, 15, traveled from Morrison, Okla., with his mom Brooke.

“I think it would be cool to serve my tribe in such a way that I get to catalog the Osage history, what we went through in the 1920s and what our ancestors went through back then. I really want to help the tribe as a whole, put our history out there because I think right now our Native American history is finally getting a spotlight in the world and we’ve never really gotten that – which is crazy,” he said. “But, I’m happy it’s finally coming together now and I want to be a part of it and help us Native Americans as a whole, not just the tribe, help us all come together and be in the world.”