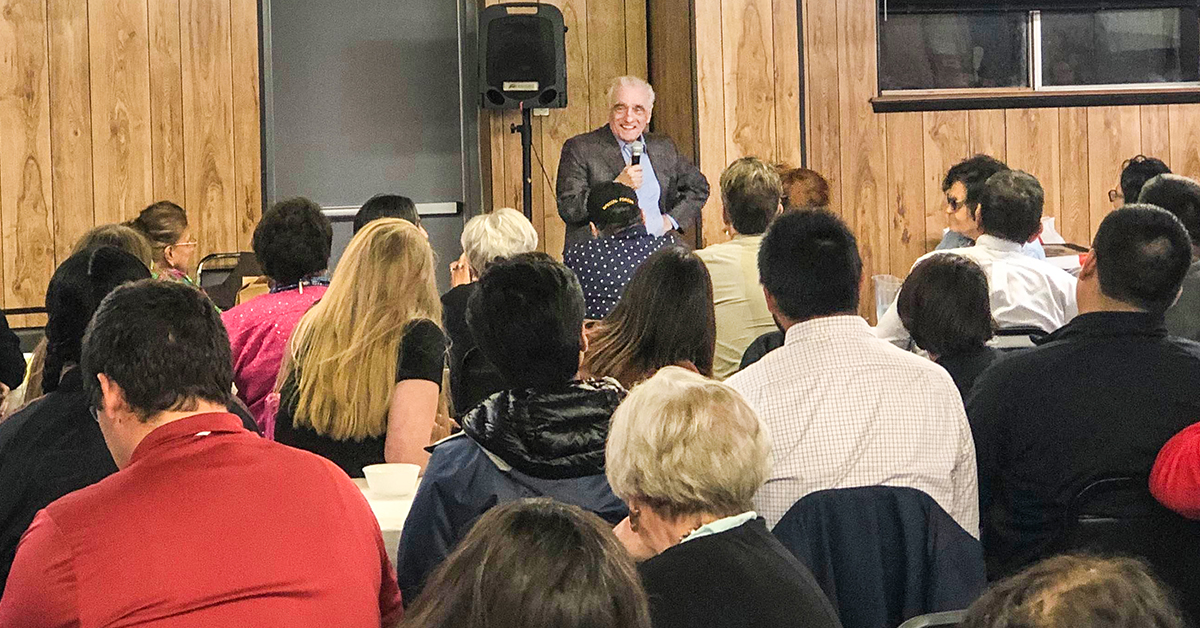 Much like an Inlonshka Committee Dinner, members of the Grayhorse District lined up around Wakon Iron Hall and one-by-one, from elder to small child, Oscar-winning Director Martin Scorsese shook hands and introduced himself to the nearly 200 Osages in attendance.

Due in large part by the efforts of Osage/Otoe-Missouria attorney Wilson Pipestem, who is also a member of the Grayhorse District, Scorsese and his team sat down to an Osage dinner prepared by Grayhorse cooks to hear concerns from the community about the upcoming film “Killers of the Flower Moon.” The Grayhorse cooks served meat gravy, frybread, dried corn, squash, green beans and salad.

After all the Osages had spoken, Scorsese stood up and spoke.

“My heart is in the right place. I hope I can do that, I hope I can give you that sense of knowing that what you’re giving to me, in my hands, that I’m going to try better than my best, I can tell you that,” he said.  “We’re working as hard as we can.”

“It is a process that we’re working on now … we won’t be finished with it until it’s right, I can promise you that.”

Scorsese said they will keep a constant dialogue with the Grayhorse community as well as all the other communities involved as pre-production gets underway.

After he finished speaking Pipestem said there was time for gifts and photos, and everyone took advantage of this time. In what was supposed to be a two-hour visit, turned into nearly three-and-a-half hours. However, Scorsese never complained. He accepted every gift, spoke with everyone who wanted to speak to him and took photos with everyone who wanted a photo. His team spoke with Grayhorse community members at length afterward and visited about the meal and its preparation.