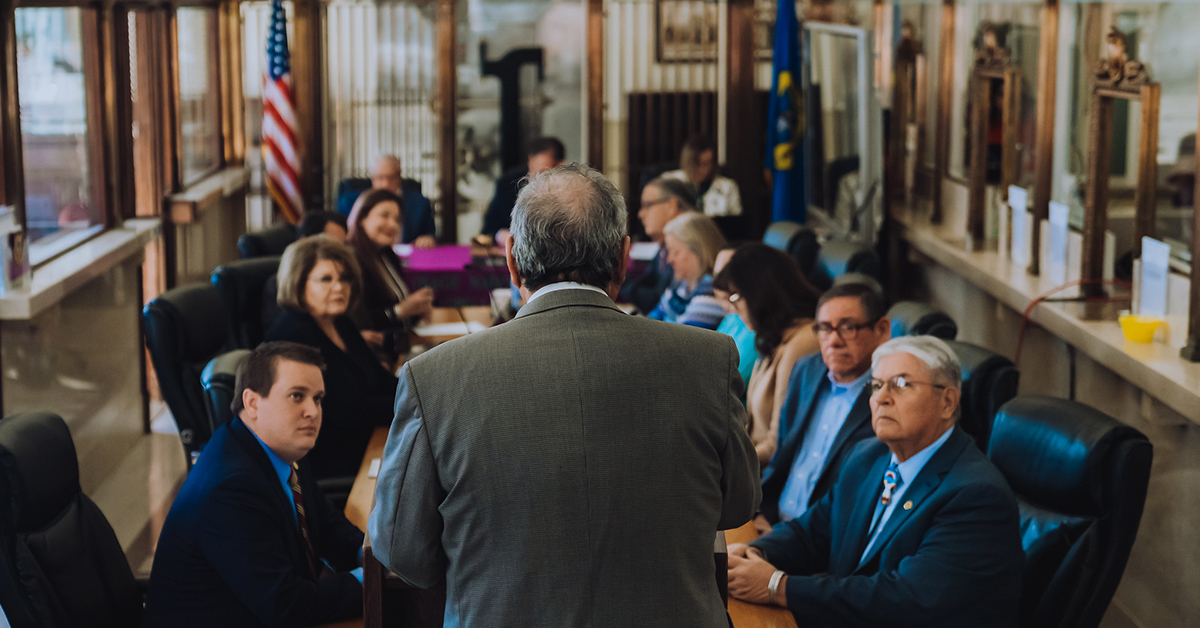 The Sixth Osage Nation Congress held a single-day special session on Nov. 19 and approved two appropriation bills for purchasing a tractor for Bird Creek Farm and a Pawhuska building to be utilized by the Family Violence Prevention Department.

Principal Chief Geoffrey Standing Bear delivered an executive message stating his office called for the special session after hearing from the Treasurer’s Office that an outside auditor for the Nation’s annual audit needs to be selected by Congress. Afterward, other items of consideration including the proposed property and tractor purchases were added to the Oct. 31 proclamation announcing the special session.

During the session, the Congressional Appropriations Committee met to discuss and consider the filed bills and audit firm recommendations presented by the Office of the Treasury.

Bill ONCA 20-05 (sponsored by Congresswoman Brandy Lemon) passed unanimously, which appropriates $35,000 for the tractor purchase with the funding to come out of the Nation’s capital asset fund.

Lemon said the Executive Branch provided support documentation for the front-end loader tractor purchase quote valid through Nov. 30. She questioned the need for the tractor and was told the current tractor from the farm “is operational, however operational for about 20 minutes and then they have to let it cool down, turn it off, they’ve done maintenance on it and upkeep, it’s definitely in need of replacing.”

Jason George, Bird Creek Farm director, told the committee the current tractor is a 1984 model “that has a lot of hours on it and actually belongs to Tribal Works, they were gracious enough to let us use it as much as we need it out there.”

Treasurer Jim Littleton said there are sufficient funds in the capital asset fund for the tractor purchase in addition to other planned capital asset purchases authorized by Congress.

Stabler said the Executive Branch requested sponsorship for the bill seeking the property to relocate the Family Violence Prevention Department offices. The property, located at 1201 E. 11th St. is the former Love of God Tabernacle Church, which sits on more than one city parcels and includes a parking lot, she added.

The building is in good shape, but will need renovation work, Stabler said, noting the structure is about 5,000 square-feet with the sanctuary estimated at 2,000 square-feet and includes existing classrooms that can be converted into offices and other offices could also be built into the sanctuary space, pending visits from construction contractors.

Stabler said Alma Hager manages the building after Congresswoman Shannon Edwards inquired about the structure’s ownership. Edwards then said she would not be participating in voting on the bill “in an abundance of caution” because she is related to Hager.

Olivia “Libbi” Gray, director of the Family Violence Prevention Department, was absent during the special session to testify at the Oklahoma State Capitol in front of a State House committee. Gray was a testifying witness that day on the topic of murdered and missing Indigenous women as part of an interim legislative study.

ONCA 20-05 passed with an 11-0 vote and one absence from Congresswoman Angela Pratt, who was attending a Native American veterans-related conference in Washington, D.C., Congressional Speaker Joe Tillman said at the session’s start.

ONCA 20-06 passed with 10 “yes” votes with an abstention noted for Edwards and Standing Bear signed both bills into law on Nov. 21.

Littleton said the Nation received seven bid responses from separate audit companies for the proposed outside auditor. According to the 2006 Osage Constitution, there is a mandate “than an annual financial statement for the Osage Nation government be audited by a Certified Public Accountant approved by the Congress or a committee of the Congress and presented to the Congress in a timely manner.”

In the end, four companies were finalists and were interviewed by the Executive Branch regarding their respective proposals for costs and services and past experience in working with other tribes, Littleton said.

After discussion, the Appropriations Committee recommended Albuquerque, N.M. firm REDW, LLC, which has previously audited the Nation’s Osage Casino operations. The Congress unanimously approved the recommendation then adjourned the special session that evening.