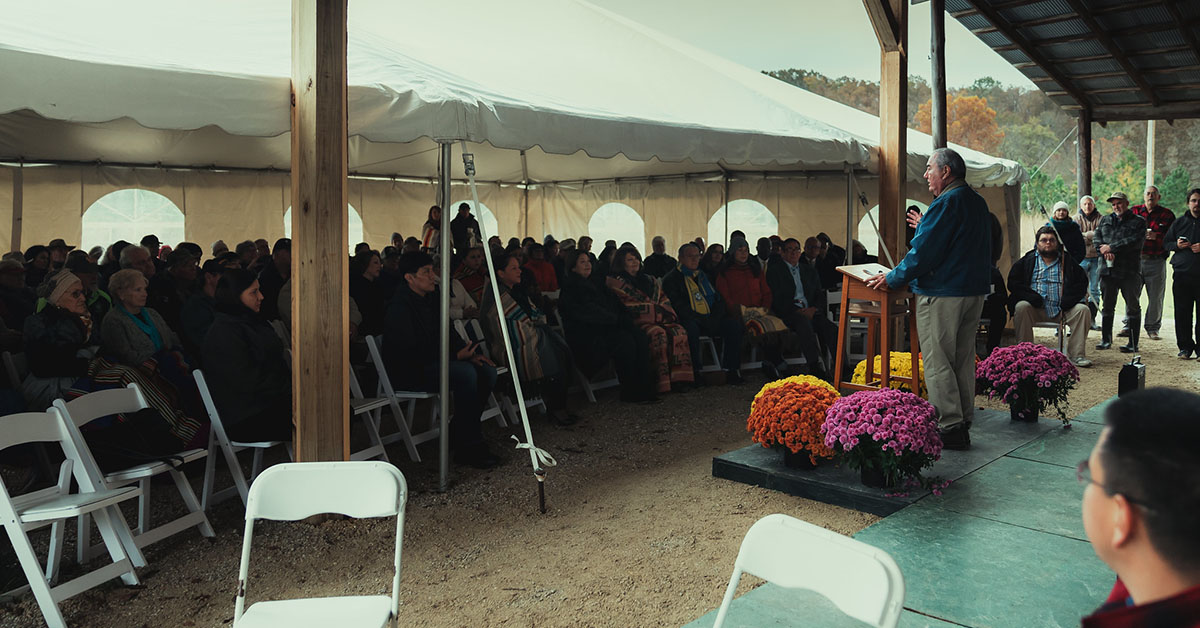 Land of the Osages Research Center opens in Central Missouri

GRAVOIS MILLS, Mo. – Thanks to a partnership between the Osage Nation and the University of Missouri, the newly named Land of the Osages Research Center is dedicated to the Nation and now open to provide an outdoor classroom for studying agroforestry.

On Oct. 29, university officials, along with ON dignitaries from Oklahoma, and local area municipal officials celebrated the opening of the Land of the Osages Research Center amid the day’s cloudy weather, wet grounds from recent rain and temperatures in the low 30s.

Located just west of the Lake of the Ozarks, the research center sits on more than 500 predominately wooded acres, which was an estate gift to the university. Ancestors of the Osage and other tribes resided in present-day Missouri during the Mississippian periods before their moves west toward present-day Oklahoma, according to the ON Historic Preservation Office website.

Dr. Andrea Hunter, HPO director, said her office has partnered with UM on various projects, including the name selection for the research center, which included consultation with the Nation’s Traditional Cultural Advisors Committee. The research center is part of the university’s College of Agriculture, Food and Natural Resources

Based in Columbia, Mo., the university invited ON officials to the opening with attendees including Principal Chief Geoffrey Standing Bear, ON Congress members, Norman Akers, chairman of the Traditional Cultural Advisors Committee, HPO staff and other government employees and fellow Osages including ON Princess Leigha Easley and Kansas resident Ed Smith and their families.

Members of the Pawhuska-based Harold Bigheart Smalley American Legion Post 198 presented the flag colors at the event’s start followed by a drum group to sing a flag song. Vann Bighorse, director of the ON Language Department, delivered the opening prayer followed by guest speakers. More than 70 people were in attendance that day.

Dr. Sarah Lovell, Director of the UM Center for Agroforestry, opened the day with a “land acknowledgement, a statement that recognizes and honors Indigenous people as the traditional stewards of the land. The Ozark region had an important history prior to European colonization. As early as 1200 B.C., this land was used for hunting and camping by early Paleo-Indians. More recently, the Osage and other tribes migrated across the area and inhabited the land now known as Missouri. They remained here for 1,300 years until the land cessions in the 1800s. The landscape of this region holds this legacy in trails, hunting camps and sacred burial grounds. We’re so grateful to the Native elders, both past and present, for their hospitality and their willingness to share for the stewardship of this land.”

“Agroforestry takes agriculture and forestry practices combining those in ways that create not just conservation, but also opportunity to earn and generate revenue from trees,” said Dusty Walter, co-superintendent for the Land of the Osages Research Center. “So, whether it’s stabilizing creek beds with riparian-forested buffers or rows of pine trees with open alleyways where you might do alley cropping, which is putting crops there … agroforestry pulls together in a way that creates a more holistic and better land management practice.”

Walter said the center situated on 550 acres would be used to conduct research, outreach and education, demonstrations on ways to earn a living from the land and “also to encourage community, Doug really wanted the communities to value this land as a resource.” Toward the end of his life, Allen researched the Osages and expressed interest in seeing the farmland named after a past Osage Chief, Walter added.

UM officials spoke with the Nation while the research center establishment was in the works and a decision was made to name the center after all Osages after consultation with Hunter’s office and the TCA. Walter applauded the partnership with the Nation adding he hopes it brings opportunities for the UM to both learn and have the Nation to be a part of the center’s development.

Chief Standing Bear called the occasion a “very moving one to see” with an Osage prayer and flag song both delivered in the ancestors’ words on the ancient homelands. “It’s an honor to be a part of it, it’s heartwarming for our Wahzhazhe to be back in our homelands with you good people and we hope to continue to share our lives with you in this beautiful place as we go forward.”

Akers thanked the UM for the research center dedication which started a year ago with the university reaching out about the property and inquiry for a name. “While the Osages have had great leaders in the past – we think of Claremore, Black Dog, Pawhuska – those are people who have led us into the future. Our committee thought about it because naming is important for us as Osage people. We wanted a name that reflected all Osages, so we looked at Land of the Osages and I have to say we’re very thankful the university chose that name because it represents all of us.”

Akers added the partnership creates opportunities for the Nation and UM to collaborate, as well as opportunities for Osage youth “to engage in healthy living, learning about agriculture, ways that are important to sustaining that future.”

Dr. Christopher Daubert, vice chancellor and dean of UM College of Agriculture, Food and Natural Resources, said the Land of the Osage Research Center is the college’s first opening of an agriculture experiment station in more than 30 years.

Osage Congressional Speaker Joe Tillman also applauded the naming noting there are people residing in Missouri who do not know about the ancestral people who resided there in prior eras “and it is important to acknowledge our past and understand how we thrive in this landscape.”

UM Chancellor Dr. Alexander Cartwright said the center’s opening is an opportunity for “us to not only conduct transformative research, but have a place where we can think about sustainability broadly, where we can understand how it was done many years ago and to continue to do that into the future.” Cartwright also acknowledged and thanked the Osage dignitaries for attending, as well as a few of Allen’s family members.

“It’s our collective experiences and backgrounds that make us stronger, it’s the way that we come together and think holistically of what our future can be and we need to always remember that it is the interconnectedness of our beings that make the world a better place and the more that we can work together, the more we can do better for society,” Cartwright said.

For more information on the Land of the Osages Research Center, visit the UM website: https://cafnr.missouri.edu/research/centers/land-of-the-osages/