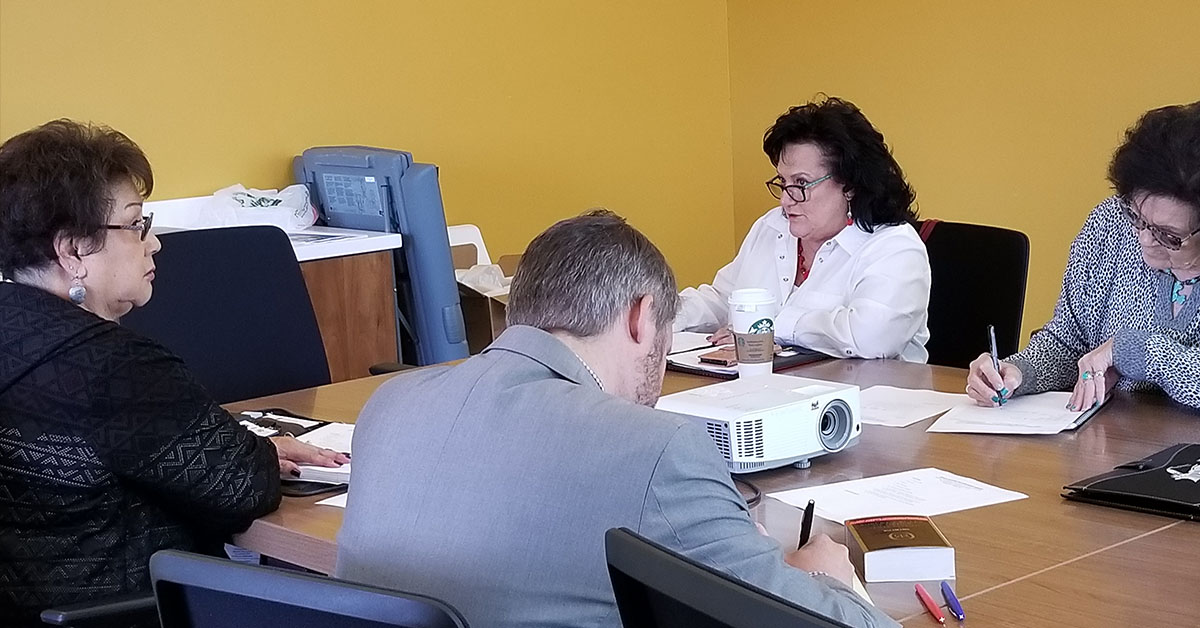 Photo caption: The Osage Nation Tax Advisory Board holds its inaugural meeting on Nov. 6 at the government campus in Pawhuska. Serving on the board are (l to r) Beverly Brownfield, Teresa Bates Rutherford and Rhonda Wallace. BENNY POLACCA/Osage News

The recently established Osage Nation Tax Advisory Board elected its officers and approved plans to attend a tribal taxation conference as part of their first duties.

On Nov. 6, the three-member board held its inaugural meeting in Pawhuska and voted unanimously on officer positions with Beverly Brownfield now serving as chairwoman, Teresa Bates Rutherford as vice chair and Rhonda Wallace is the secretary.

According to Osage law (ONCA 19-06 sponsored by Congressional Speaker Joe Tillman) passed by the Sixth ON Congress during the 2019 Hun-Kah Session, the tax advisory board is charged with duties including: reviewing tax laws, policies and regulations, performing research, attending conferences on tribal taxation and providing reports and recommendations for changes in policy and regulation to the Principal Chief and the Director of the Tax Commission, and amendments to the Nation’s tax code to the ON Congress.

During the meeting, the board unanimously approved travel plans to attend the 2nd annual Taxation in Indian Country Conference scheduled Dec. 3-4 in Las Vegas. The conference is hosted by the North Dakota-based Three Affiliated Tribes and features an agenda of session discussions touching on updating tribal tax codes; taxation of tribally-chartered entities; and treaty rights and taxation.

Rutherford noted she is interested to hear the planned discussion on marijuana tax and the tribal cannabis industry in Nevada. “We could look into doing the tax portion of it if we’re not wasting our time, I don’t want us to figure out all these steps and do all this stuff then find out we’re not going to do anything with it,” she said.

Adam Trumbly, an Assistant Attorney General for the Nation, attended the meeting on behalf of recently appointed AG Clint Patterson. “With the change in leadership, we’ve been restructuring our office, so we’re still trying to parcel out who’s going to specialize on what … From our end, we’re not getting a ton of tax questions, every now and then, we’ll consult with Greg on some issues … If there’s anything we can do to make it more efficient or more smooth, we’re certainly receptive to that,” Trumbly said.

For more information on the ON Tax Commission services and to obtain downloadable tax/ license applications, visit online: https://www.osagenation-nsn.gov/what-we-do/tax-commission