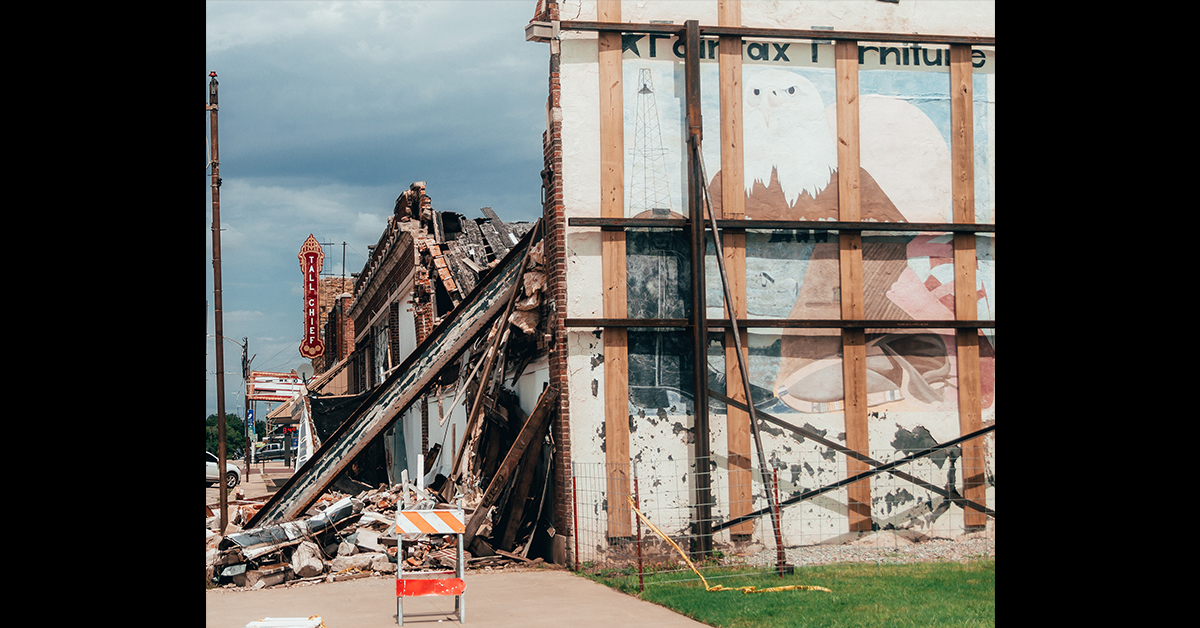 Photo caption: The south wall of the Big Hill Trading Co. is currently supported by a temporary support wall that's designed to last six months, but that six months is up and county commissioners are deciding whether to stabilize the building once again or tear it down. CODY HAMMER/Osage News

Osage County Commissioners have given the Big Hill Trading Co. another chance after impassioned pleas from Fairfax residents convinced them to reassess the building’s structure.

Not all three commissioners were leaning toward saving the building, District 1 Commissioner Randall Jones continually expressed his concern for the public’s safety and the liability the commission would face if someone were to get hurt – or if the building were to fall onto the neighboring Fairfax Medical Facilities Inc.or the Barnard Insurance Agency.

“If someone gets hurt whose name is on it? Ours,” said Jones. “Our responsibility is to the public.”

Carol Conner, Fairfax resident and Editor of The Fairfax Chief said, “While I don’t want anyone hurt, rebuilding it is going to do more for Fairfax than a vacant lot.”

Conner said the community would like to see the building stabilized and made into a memorial to the victims of the Osage Reign of Terror.

“Honoring the Osage victims, honoring the birth of the FBI ... it’s your decision,” Conner said.

District 2 Commissioner and board chairman, Kevin Paslay, said he saw a big opportunity for the town of Fairfax and the county from tourism revenue, especially with the upcoming film “Killers of the Flower Moon,” a movie based on the bestselling book by David Grann of the same name. Conner said there was an increasing number of tourists visiting Fairfax.

Paslay asked if there was any interest from the filmmakers to film in Fairfax? Jones said he heard rumors all filming will take place in downtown Pawhuska. Conner said that wasn’t confirmed because she had film crews continuously calling her about possible film locations in and around Fairfax.

Assistant District Attorney Ashley Kane said the commissioners had four legal options. Option one was to demolish the building, option two was to sell it, option three would be to donate it to the town of Fairfax and the fourth option would be to keep it, and improve or maintain the building.

Darren McKinney, District 3 Commissioner, said the town of Fairfax does not want the building, but he did not want to see the building torn down either. He said the issue of funding would hamper their efforts if they were to decide to keep it and improve it. Conner said there is a private donor interested in the building, but they would like to see an investment made by the county first.

Jones pointed out that Fairfax was not the only town in the county with a building falling down. “If we do this, it’s going to take everything we have,” he said. Currently, there are “20-something” other towns with buildings that need help and if the commissioners are going to give money to stabilize the Big Hill, then the same attention would have to be paid to other buildings, he said.

Kane said there is also an outstanding tort claim on the building after it fell on top of a truck with the owner still inside. McKinney said the owner of the truck is asking for damages to be paid and his medical bills. Jones said the commission does not have the money to take on any more liability for the building.

Loftis said the support wall constructed on the south side of the building was made to last six months and they were out of time. He said the southwest corner is the worst side of the building and his biggest concern was snow load on the roof. He said to pay the structural engineer to reassess could cost anywhere from $2,000 to $5,000. The commissioners would need to move fast if they choose to stabilize the building for a memorial.

The crimes against Osages that took place in the Big Hill during the Reign of Terror have been well documented in Grann’s “Killers of the Flower Moon” and “The Deaths of Sybil Bolton,” by Dennis McAuliffe Jr. There was a consistent cover-up of Osage murders by the mortician that worked there, falsification of autopsy reports, and Osages were consistently overcharged for services.