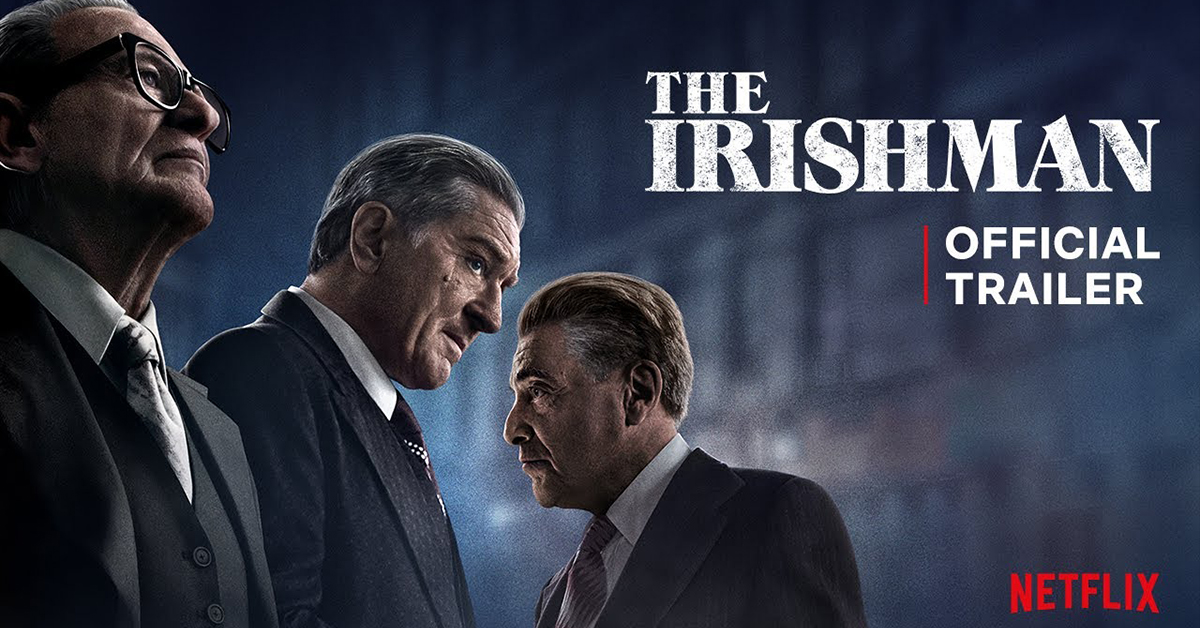 What ‘The Irishman’ Tells Osages

The Irishman is Martin Scorsese’s latest film, a period piece with lush color and cinematography that makes you feel you’re sitting with mob hitman Frank Sheeran while he tells you his life story. Hailed as a masterpiece, it’s an example of Scorsese’s style and strengths that offers Osages a glimpse of what we may see in a Scorsese adaptation of David Grann’s “Killers of the Flower Moon.”

Adapted from Charles Brandt’s book “I Heard You Paint Houses,” The Irishman focuses on Sheeran, the hitman who killed Teamsters boss Jimmy Hoffa and the internecine political struggles between the Teamsters union, organized crime and Congress. Scorsese brings it to life with a screenplay by Steven Zaillian and a phenomenal visual feast by two-time Academy Award-nominated cinematographer Rodrigo Prieto.

Legendary actors Robert De Niro, Al Pacino and Joe Pesci carry the three-and-a-half-hour film. A computer-assisted de-aging process allows 76-year-old De Niro to play Sheeran as a soldier in World War II into old age. We meet Sheeran, who was a Teamster boss and Jimmy Hoffa’s enforcer, friend and murderer, at the end of his life, alone in an assisted living facility.

While Scorsese says he’s committed to exploring salvation, this is still a gangster movie. Routine violence is interwoven with intimate, believable family moments. In an interaction that’s familiar to any child, Joe Pesci, (Russell Bufalino) awkwardly tries to connect with his protégé Sheeran’s daughter. The scene is shot from behind the girl, while De Niro holds her hand, trying to pull her closer and make her discomfort less obvious.

The film is timely with Congressional investigative hearings and references to corruption and Watergate era political figures. Still, when the film was over, even after appreciating the 1970s clothing details, the exquisite color, the ethnic slurs between one branch of an Italian family and another, I felt I’d seen one more Mafia movie. There was blood spatter on the walls, the matter-of-fact business of strangling someone, the challenge of disposing of murder weapons and a victim fed through a leaf shredder.

In the final scenes, Sheeran sits alone in an elder care facility, trying to remember the words for confession from his childhood Catholic faith, while a priest tries to wring any shreds of remorse from him, asking, “Do you feel anything?”

to talk about filming “Flowers of the Killer Moon,” and he returned for a community dinner with members of the Grayhorse District in November. He’s held Osage only casting calls and is asking for Osage artisans and workers. Costume designers have consulted with Osages at White Hair Memorial and the Nation’s Cultural Center and are seeking input from Osages willing to share their family’s blankets and clothes.

I look forward to seeing Osage friends on the screen, and Osage County bustling as it was in the 1920s, but this is a complicated history with impacts that still reverberate through Osage families. The clothing details will give Scorsese the authenticity that is important to his films, but “The Irishman” doesn’t tell us how he will portray the Osages who were the victims of violence.