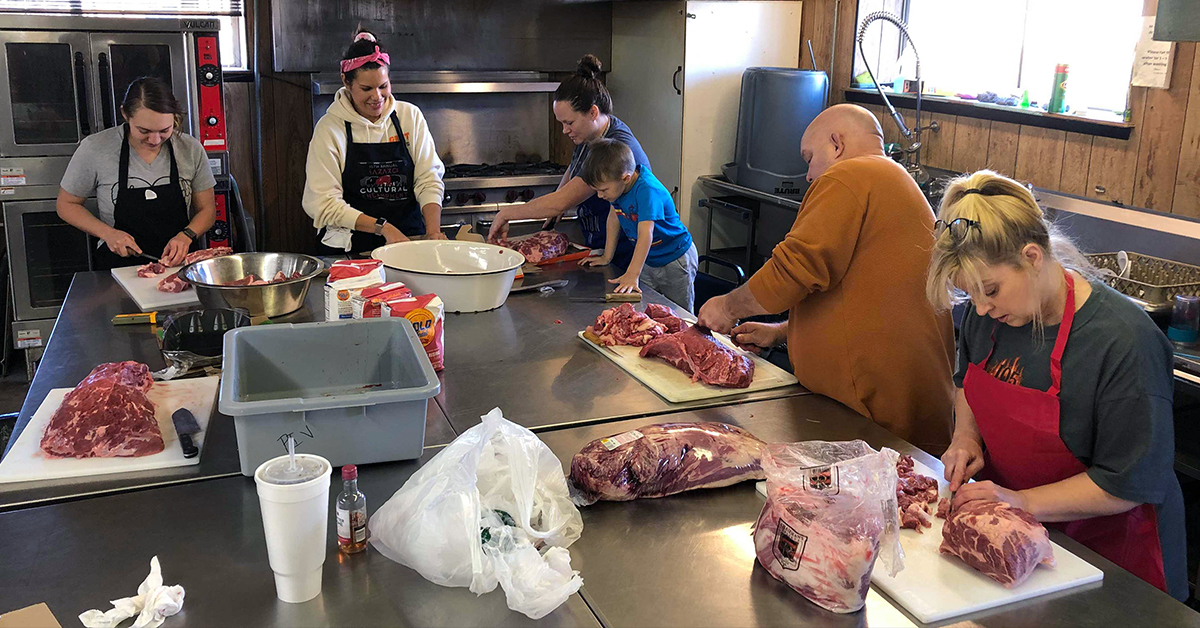 There are many Osages who were not born into a family with cooks or a family camp at Inlonshka. There are those Osages who have never served on a Drumkeeper’s committee, served as a cook or a fireman, or been around an Osage dinner.

Amy Shackelford, a granddaughter of the late Eva Yates, a former Pawhuska District Head Cook for 10 years, noticed the parents of the children going to school at Daposka Ahnkodapi needed a helping hand when it came to Osage cooking.

She asked Marjorie Williams, a long-time Inlonshka cook who has also been voted People’s Choice at the National Indian Taco Championships many times (her grape dumplings are legendary) and she is also a grandmother to students at Daposka Ahnkodapi. Williams brought her daughter Dora Williams to help, who is also a teacher at Daposka Ahnkodapi. Together they spent Nov. 24 with five families, teaching them how to cook an Osage meal over the fire from start to finish.

“One of the pillars of the school is preserving cultural knowledge,” Shackelford said. “And cooking is a big component of an Osage way of life. It’s in everything we do, from handgames to Inlonshka, to funeral dinners. We have to have Osages who know how to cook this food.”

The parents arrived around 10:30 a.m. and trimmed and cut pork and beef, paying close attention to how the meat was cut for the meat gravy. If the meat is cut wrong the meat will fall apart while cooking over the fire.

Williams showed parents how she mixes her fry bread and how she makes her grape dumplings, with parents writing down recipes and asking questions. Williams also explained that what she was showing them was how she was taught and other families and districts, such as Hominy and Grayhorse, may cook things differently. She encouraged parents to learn the ways of their families or their district, if possible.

Most of the men stayed outside around the fire with Jason Cass, who has served as a fireman for Drumkeepers in the past, showing them how hot a fire should be for certain dishes and how to know when certain dishes are done.

Fellowship happened among the parents as they came together to learn and cook the meal. There was much laughter and conversation throughout the day. Their children and grandchildren played outside in the nice weather on the new playground just outside Wakon Iron. Williams is also on the Pawhuska Village Committee and was instrumental in getting the new playground equipment. She told parents not to hesitate to call her when they needed help when making a dish for their family and that she enjoyed cooking with them for the children.

By 5 p.m. the meal was ready and Anthony Shackelford asked John Red Eagle to pray for the meal. The table was set Osage style, using Williams’ dishes for the occasion. The parents fed about 50 family members and community members who were invited to eat.