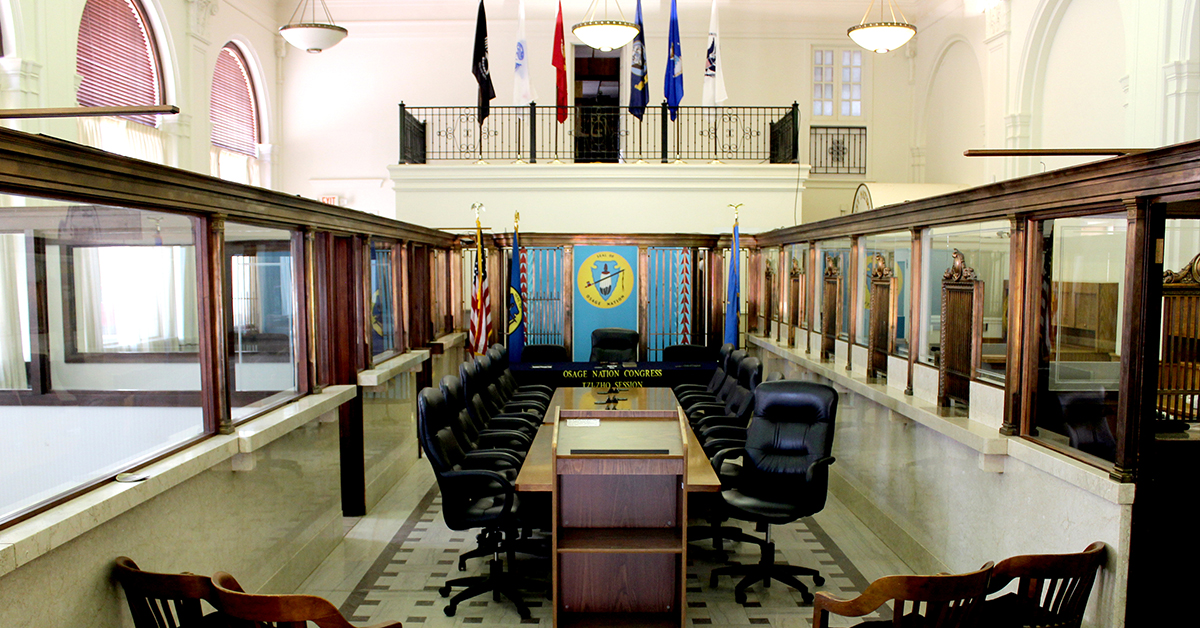 Photo caption: The Osage Nation Capitol Building will be used for filming scenes in the upcoming "Killers of the Flower Moon" production. CODY HAMMER/Osage News

Discussions on finding the Osage Nation Congress a new home are center stage again after film crews with the “Killers of the Flower Moon” project expressed interest in using the Nation’s Capitol Building for shooting a scene in May.

The ON Capitol Building – formerly the First National Bank along Pawhuska’s Main Street – is being sought for a scene shoot on the first floor where Congress meets for its sessions and has office space. To make way for film crews, the Legislative Branch will need to move its offices from the building.

Executive Branch officials, who are charged with overseeing the Nation’s buildings occupancy and maintenance, met with the Congressional Affairs Committee on Jan. 7 to start discussing logistics to accommodate the filming plans.

Assistant Principal Chief Raymond Red Corn said he believes an “agreement or concurrence” between his branch and the committee is appropriate moving forward since the Congress is a separate branch and has its own equipment and property at issue for moving.

Congressional Second Speaker Paula Stabler said Congress was informed the filming date in the building is planned May 11 and asked for clarification on the date because she was told another later date in past conversations. She also expressed concern the May date is in the middle of a “time crunch” with the 24-day 2020 Hun-Kah Session wrapping toward the beginning of the month with Congressional staff needing to complete any lingering session work and the June 1 general election.

Dante B-G Halleck, the Nation’s Managed Assets director, said he is in talks with the film production crews who have visited Pawhuska, along with famed-film director Martin Scorsese, to identify shooting locations.

“We’ve had a few walk-throughs with (movie) production staff and site scouts and this is one of five sites they’re interested in for Osage Nation assets/ real property,” Halleck told the committee.

Halleck said the production staff plans to use the Capitol Building’s ground floor for one day of shooting office/ FBI scenes and the Nation will be reimbursed for moving costs. “This is probably the final scene on their schedule, they’re looking at starting at the end of next month (February) on Main Street ... Space costs obviously wouldn’t be charged to the Congress during that time, we’re doing some comparisons as far as comparing other productions so we get a fair market rate on this for insurance, the use of the space, utilities, there will be security on-site 24-7, it will be a closed set as well because there will be some pyrotechnics … once we get all that drafted, it will be (sent) through the (ON Attorney General’s office).”

Halleck said his office plans to place funding received from the film production into the Nation’s property improvement fund for other upcoming ON property costs.

“I think this provides us an opportunity to showcase this bank building,” said Congressman RJ Walker. “It’s a cool old building, there’s a plaque on the front that basically states it was built or given to the Osage Nation back in the day. As far as I’m concerned, my own personal office stuff, I can take care of that, I would be willing to help others move their stuff out. I think those are logistical details we can easily overcome. As far as the concerns the staff may have, that can be worked out through the Second Speaker and we have an opportunity for 3-4-5 other meetings this committee can have between now and then to facilitate this … I think we need to make this as uncomplicated as possible.”

Halleck said the discussion on new space would continue with a request from the Congress for his office to locate another spot for the Legislative Branch.

Congressman Archie Mason recalled the early days of the Congress when the 2006 reformed Osage government launched and the Legislative Branch didn’t have offices at the time and expressed the thought Congress members could keep offices at home temporarily and could use the opportunity to clean out and discard unused/ unwanted items.

After discussion, the committee approved a motion by Potts to “direct the Second Speaker to negotiate with Mr. Dante Halleck details to be included in a contract for the ‘Killers of the Flower Moon’ filming and use of Congressional office space” and immediately upon execution of such contract for the Second Speaker to communicate potential moving details to the 12-member Congress.

Stabler said the discussions on Congress moving to another space will continue at future CA committee meetings.