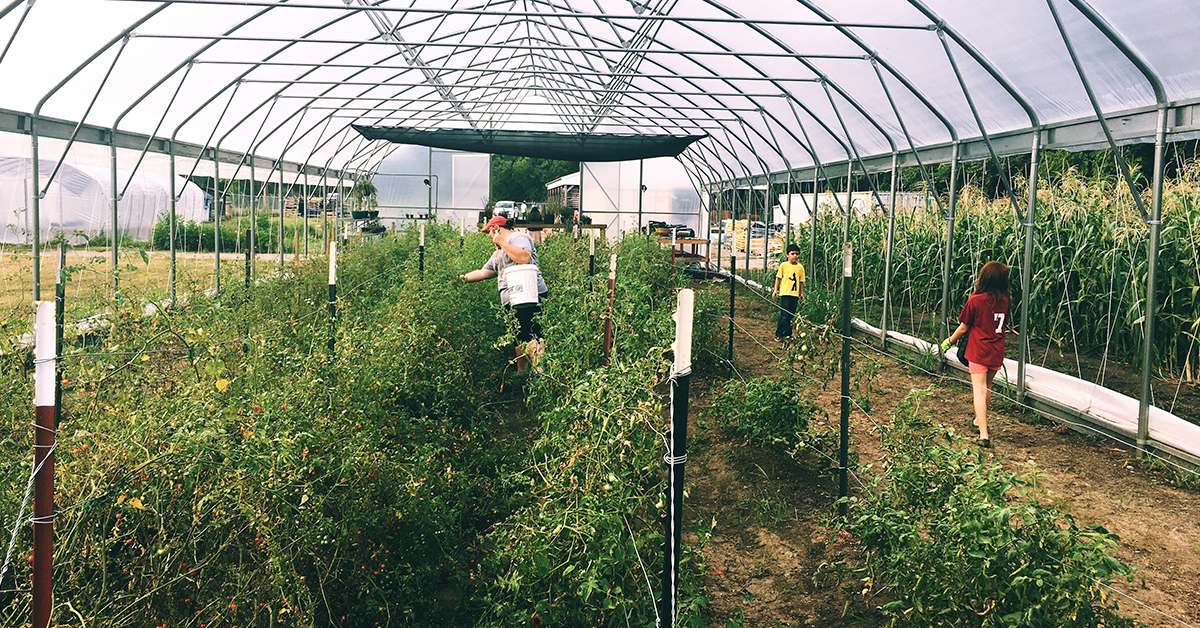 Photo caption: Karie Mashunkashey picks cherry tomatoes under one of the hoop houses at the Free Harvest Day at Bird Creek Farms on Aug. 26, 2017. This hoop house and two others will be converted into greenhouses. Osage News File Photo

Bird Creek Farm, the Nation’s 270 acres of donated land on the southeast side of Pawhuska, is getting an upgrade in 2020.

The farm, which currently has hoop houses, an aquaponics facility and produces crops that are given to Osage programs, will be expanding production, adding greenhouses, beehives and raised beds.

Jim Trumbly, Bird Creek Farm Project Manager, said the farm is currently working with Osage Casinos to identify specific crops that could be used in the Casino’s restaurants. They have also discussed possibly growing crops such as barley and rye that could be used to make beer for the Casinos’ Nine Band Brewing Company Brewery.

The Farm is also adding 20 new beehives. They have already ordered the materials and they will begin building them in January and February and the bees will arrive in April or May, Trumbly said.

“The first year you don’t expect a harvest, depending on the bees. Generally, the first year you want to keep the honey for the bees. So, we’re looking at 2021 to harvest from 20 beehives and 2022 we’ll harvest from 40 beehives,” he said. “We would like to get up to 100 to 150 beehives. It does two things; it helps with the cross-pollination of our crops and at the same time we could harvest honey and have Osage Honey.”

They plan to expand the area of cultivation by 14 new acres. The area was used for growing hay last year. They are hiring a horticulturalist and three new staff members. He said they have been working with the USDA and inspections have already taken place. The Osage Nation Department of Natural Resources has taken water samples out of Bird Creek and pending results they will see what type of filtration system they will need.

“We’ve been working with the FDA and getting our GAP certification so we can sell our produce and our results, not only to our Casinos but to the public in general,” Trumbly said.

He said they plan on putting in at least eight new raised beds at the farm, putting in new greenhouses and converting the existing hoop houses into greenhouses – pending on funding. Their hopes are to have five to six greenhouses. They’ve submitted grants for the climate control equipment they’ll need for the greenhouses. They should know if they’ve been awarded the grant money by early spring.

They are adding a strawberry wall in their new aquaponics facility.

“We were working with the agricultural engineering department at OSU and they came out and did a study on how to do the wall and it’s not nearly as expensive as we thought it would be, so we’re going to jump on that really quick,” he said.

Currently, Bird Creek Farm has four fulltime employees and their offices are located on the farm.

“We’re going to continue with our education and cultural mission, but we’ve expanded and really focused on the commercial mission and we want to make the farm at least self-sufficient if not profitable,” Trumbly said. “We’ve committed for the Inlonshka dances. We’re going to supply the non-meat items for the Drumkeeper committees.”