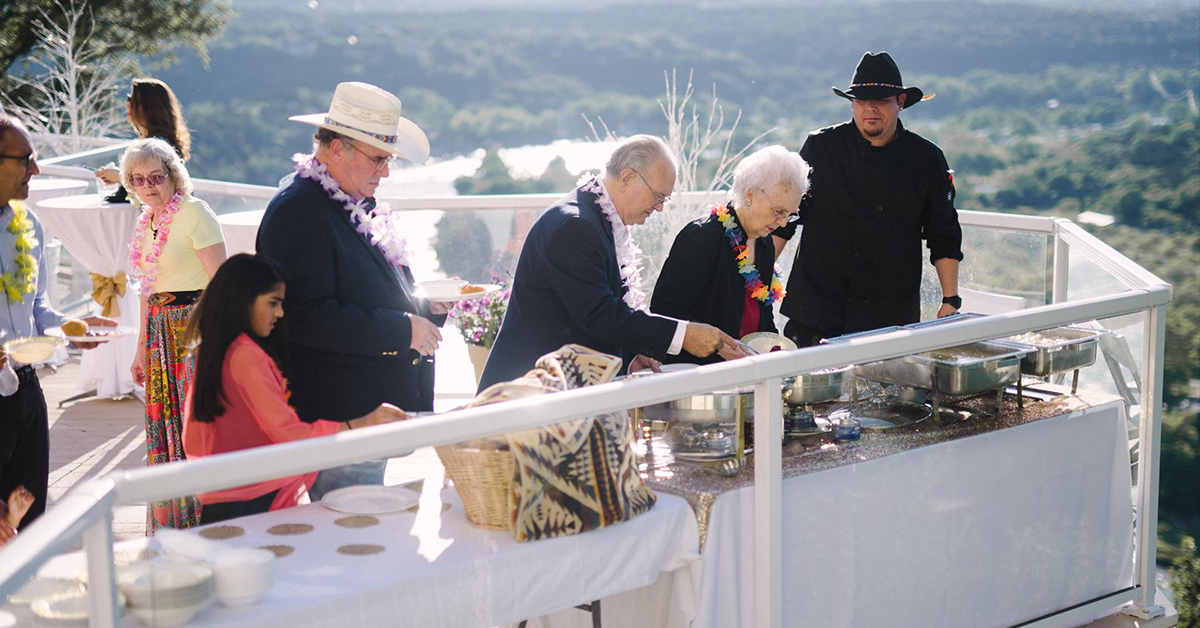 Photo caption: Brian Lookout (black cowboy hat), is the owner of Ah-Tha-Tse Catering which was just hired to cater for the production team working on "Killers of the Flower Moon." Courtesy Photo

At high noon, on Jan. 3, Brian “Da Chef” Lookout made his usual rounds delivering lunch orders to local Pawhuska businesses, offices and residents as part of his Osage-owned catering business, but he also delivered a breaking news update on the side.

Lookout’s Ah-Tha-Tse Catering business has been hired to make meals for the production team working on the upcoming film “Killers of the Flower Moon.” The film is based on David Grann’s bestselling novel about the Osage Reign of Terror and the birth of the FBI.

Lookout broke the news to customers as he delivered the day’s featured special – an Osage meatpie with cheesy hominy and a candied cinnamon apple – and said the following week would be the last round of lunch deliveries through the end of the year.

On Jan. 7, Lookout wrote on Ah-Tha-Tse Catering’s Facebook page: “We would like to announce that we have been booked for the next ten months ... to cook for the production team of Leonardo DiCaprio and Martin Scorsese's production company's movie ‘Killers of the Flower Moon.’ This being said, it means we will be feeding them five days a week, which will put a hold on most of our catering, and of course our lunch service. We will of course miss all our patrons, and we will be back before you know it!”

“That’s great news, I was just bragging on you guys in D.C.,” said former Principal Chief Jim Gray who was visiting Washington at the time.

“Wow! Congratulations! We will miss you and your yummy food,” said Denise Spicer.

With Lookout’s new work commitment, he will also be absent from several local events and special occasions he’s catered for including weddings, parties, dances and Osage Nation events, which include ON Museum exhibit receptions. Lookout has maintained Ah-Tha-Tse (Osage for “we eat”) Catering in his hometown of Pawhuska for nearly a decade and has 20-plus years of culinary experience with gigs in Santa Fe, N.M. and at Tulsa’s Southern Hills Country Club.

Lookout’s hiring to work with the film production crew is one of the first updates on Osages working in some capacity with the movie project. In November, casting calls were held in Pawhuska, Tulsa and Oklahoma City with an emphasis on Osages first and then non-Osage Native Americans who were among the scores who read lines with audition crews or who submitted headshot photos for consideration as movie extras.

As Lookout delivered the Jan. 8 lunches of tomato/ ground beef goulash and turkey sandwiches, he expressed gratitude to customers for the final days of service before a switch in customer audience. Lookout said he’s been in preliminary talks with production staff about menus and dietary needs and requests of those he will be cooking for.

With the transition to cooking for Hollywood film industry professionals, Lookout said he will be making dishes with more greens, requests for foods with less sugar and starches, and other foods he usually doesn’t prepare during his Pawhuska lunch delivery service, which he promotes on Facebook, printed-out menus and word of mouth around the community.

For the community, it will be at least a 10-month absence from Ah-Tha-Tse Catering favorites including Barbecue boneless pork ribs; spaghetti with meatballs and garlic bread; Cajun red beans and rice with andouille sausage; Osage corn soup or chicken and dumplings with frybread; chicken alfredo; baked ziti; salmon; fresh salads and green chile chicken enchiladas.

In a recent conversation with Bondeson, Lookout noted: “Can you imagine 18 years ago, we were working at Southern Hills Country Club cooking for all of Tulsa's high society and the U.S. Open and now we’re on the Osage Reservation in Good ol’ Pawhuska, USA, cooking for A-listers? There’s got to be some powerful spirits going on, in, and around here. You know our ancestors have to be up there enjoying some of the great things that are happening for our people.”