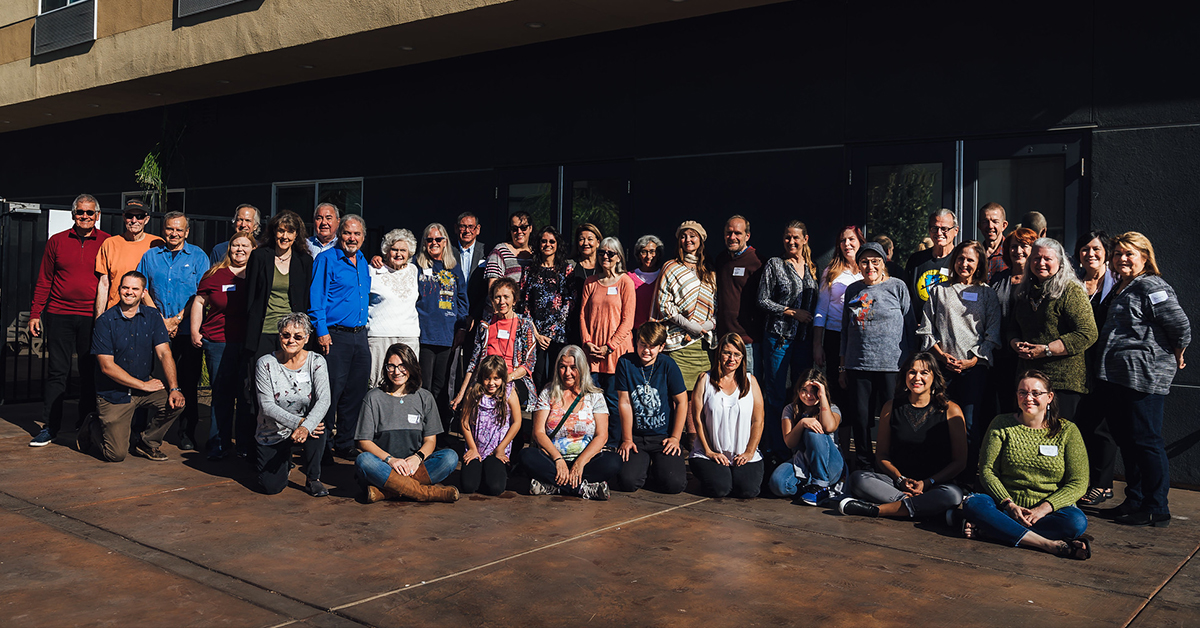 Principal Chief Geoffrey Standing Bear opened his address stating: “We’re all from the same 2,229 people (original allottees) and already we’ve talked about how my father may have known your uncle, so we’re all connected and it’s really wonderful to see.” He then shared the most recent statistics including the Osage enrollment count is at 22,144 members and said: “that is a significant increase and a wonderful increase from just five years ago.”

For gaming revenue, Standing Bear said 2019 “is the best year we’ve had and our projected revenue from the (Osage Casino Gaming Enterprise) is right under $49 million, which is significant for Osage – remember we’re in a state where there’s 34 gaming tribes out of 39 (federally recognized) tribes and over 100 casinos in a state that has 4 million people, so it is tough competition.”

Standing Bear said the Nation has purchased property west of the Bartlesville airport just off U.S. 60 for a new casino, which would move the location closer to the city. In Pawhuska, Standing Bear said the Nation purchased land just east of the Kum & Go convenience store for a new Pawhuska casino location, which would move the casino amenities from the Pawhuska Village property when it’s built. In the meantime, Standing Bear said “the tedious process of taking land and putting it in federal trust” is ongoing for those land parcels.

“We’re hoping in six months, that (land into trust process) will be done and the (Gaming Enterprise Board) has told me they’re going to approach the Congress for authority to engage in an indebtedness to build those two (casinos), they want to build them at the same time to save money.”

Congresswoman Maria Whitehorn told the attendees she’s filed a constitutional amendment resolution (ONCR 19-22), which seeks to put a ballot question to Osage voters on whether the 2006 Osage Constitution should be amended to allow for a constitutional convention. She filed the resolution during the Tzi-Zho Session in September and it faces further consideration before a vote by the 12-member Congress, which requires 10 “yes” votes to be placed on the next election ballot.

“What you’re seeing is just the ability to put that into the language of the Constitution, it doesn’t have the draft of a referendum, there are many different ways people do them,” Whitehorn said. According to ONCR 19-22, an “Amendment by Convention” section would be added (if passed) to Article XX of the Constitution. The proposed section language reads: “No convention shall be called by the (ON) Congress to consider the Constitution unless a legislative referendum providing for such convention shall be first approved by 65% of Osage electors at a general election.”

Whitehorn said another part of Congressional duties is oversight of the money that is spent on government costs. “The Chief lets us know what his initiatives are, we look at our programs, we see what we do, we evaluate how our money is being spent, so we ask questions so we can support them or ask ‘hey, have you ever thought about this?” she said. For example, Whitehorn said she supports the Nation’s Daposka Ahnkodapi (immersion school) but has questions on its costs and plans.

Congresswoman Brandy Lemon touched on economic development, which included the failed appropriation bill to approve $500,000 to be deposited into the Nation’s economic development fund during the 2019 Tzi-Zho Session. “How I felt it took place is we’re a little gun shy to put any more money at this time (into the fund) because we’ve had no production as far as income back from (the Nation’s two LLCs),” she said, adding “economic development is something we definitely have to get to.”

Lemon told the attendees she sponsored a bill (approved by Congress) during the November 2019 special session for a $35,000 tractor purchase for agricultural purposes at the Nation’s Bird Creek Farm to replace a dilapidated one. She also said she is working on another bill aimed at “strengthening our food sovereignty,” which would require law code to be in place and the rules/ regulations would come from the Nation’s Department of Natural Resources.

Congressman John Maker told attendees he’s hearing stories and feedback on people using the Osage language apps to learn the words, “so I can tell you that the app is working, it’s a great addition with our Language Department… One of Chief Standing Bear’s main focuses is saving our language, you can’t really be a tribe if you don’t have a language.”

Maker also mentioned the proposed ballot question asking Osage voters whether elected/ retained officials in all three government branches should be subject to term limits. The Congress passed the resolution (ONCR 18-20 with Congresswoman Alice Goodfox as co-sponsor) in the 2019 Hun-Kah Session for the question to go on the 2020 general election ballot. Maker said if voters approve the question, those elected/ retained officials in the three branches would be limited to five full-terms (a total of 20 years in office).

The gathering also featured introductions and a brief discussion on the Osage News by Polacca and Editorial Assistant/ Photographer Cody Hammer. Also, Duane BigEagle, a member of the NCO committee that plans the gatherings, read poetry he’s written.

“The presentations and flow of this gathering went very well,” said Keir Johnson-Reyes, also an NCO committee member. “Participants were very appreciative of the Chief's and Congressional representatives' attendance. Our NorCal Osage community acknowledges the time, effort, and resources required to attend, and we really enjoyed the sharing of important information, laughter, connections, and stories that took place. We are also very appreciative of Ms. Ann Maker Freeman who lent her expertise through providing our ribbon work activity ... All in all, we had a very enjoyable meeting and look forward to the spring meeting!”

Johnson-Reyes said an NCO spring gathering is scheduled for March 29 with location to be determined later.