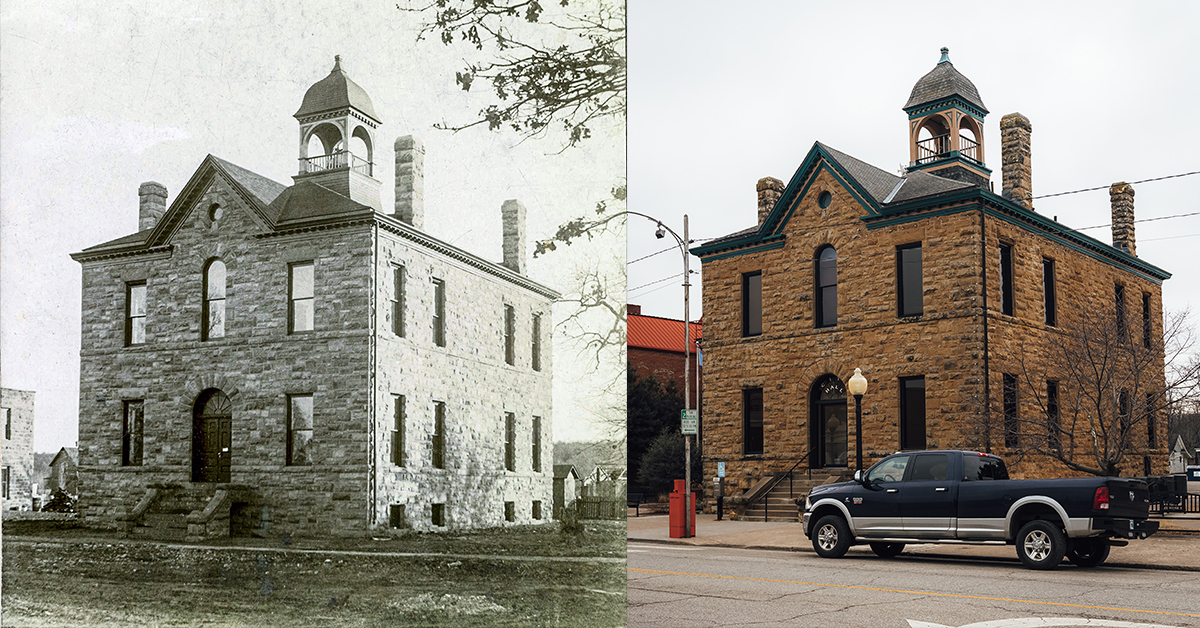 Pawhuska City Hall may once more be home to Osage lawmakers

Photo caption: On the left, the Osage Council building circa 1895. Photo courtesy of the Osage Nation Museum. On the right, the Pawhuska City Hall building on Jan. 15, 2020. CODY HAMMER/Osage News

Assistant Principal Chief Raymond Red Corn went before the Pawhuska City Council on Tuesday and made a proposal – to begin the conversation of the Nation possibly purchasing the City Hall building.

He was clear that his proposal was preliminary because the Osage Nation Congress would have to agree to the purchase and so would the City.

“The Principal Chief asked me to approach the City on the subject of re-purchase of where we are sitting now,” he said. “The Osage Nation built this building in 1894, we sold it because the 1906 Act commanded that we did. It was auctioned off and I believe the City has been here ever since.”

“We are doing this for a reason, and that reason isn’t even solidified yet, but we want to be transparent about this entire process.”

Red Corn handed out a three-page outline that included four steps of the process. Step one, Congress agrees to explore the process. Step two, the City determines the combined costs of constructing new office space and relocating. Step three, the Nation determines costs and payments to the City if improvement of the property is necessary to accommodate the Congress. Step four, the Nation and the City agree in writing on the price, the amount to be placed in escrow and a schedule for design, construction, and occupation of both the new City offices and transfer of building to the Osage Nation.

“The first question on everyone’s mind is, ‘How much are you going to sell it for?’” he said. “The answer to that question is in general terms, whatever it will cost for the City to replace this building in terms of square footage, in terms of its utility, hopefully with new things like a drive-thru for bill payment, no (front) steps, etc. etc.”

The stakeholders in the process are the citizens of Pawhuska and the Osage Nation, he said. The building has been used for decades as a place to pay bills and conduct the city’s business. One reason why the Nation is interested in purchasing the building is so that the 12-member Osage Congress can move in.

Congress has been exploring options to move its operations out of the Capitol Building for the past two years but has not been able to come to a consensus on whether to build a new building or move into other office space.

The Capitol Building is the former First National Bank building located on Main Street. The building sits catty-corner to Ree Drummond’s The Mercantile, the flagship store of the Pioneer Woman franchise. Red Corn said the Nation is looking to capitalize on the building’s location and put a commercial business in the first floor. Drummond’s store and restaurants draw thousands of patrons a day.

Other interests in the Capitol Building include the upcoming film of the Martin Scorsese-directed “Killers of the Flower Moon.” Filmmakers have expressed interest in filming in the first floor of the Capitol Building. Filming is projected to begin in May.

The outline proposes the city council take 30 days to consider the possibilities presented by the Nation due to the complexity of the proposed transfer. If the council decides sooner than 30 days to pursue than the Nation is ready to begin discussions.

The Osage settled in the area in the 1870s with the Indian Agency established in 1873. The current City Hall building was built by the Osage in 1894 and served as the Osage Council’s chambers. It was built to replace a previous council house that had burned down.

According to the 1906 Act, the “Osage Council building” and all other federal buildings used and occupied by Osage citizens in the town of Pawhuska and the lots they sat on, would be sold at auction to the highest bidder. According to the building’s Town Lot Deed, Chief Ne-kuh-wah-she-tun-kah held the auction on April 1, 1907, and the building was sold to three individuals, C.M. Hirt, A.H. Gibson and J.D. Scarborough for $12,005. Chief Ne-kuh-wah-she-tun-kah did not sign his name on the deed and instead, a small “x” with “His Mark” is next to it in parentheses.

Hirt, Gibson, Scarborough and their wives would turn around and sell it to the city of Pawhuska three months later for the same amount on July 10, 1907. It’s been in the city’s possession ever since.

The building has been listed on the National Register of Historic Places since 1976.

The town of Pawhuska, named after Osage Chief Pah-Hiu-Skah (White Hair), was founded in 1907 and became the county seat. It has also remained the capital of the Osage Nation. Oklahoma entered statehood on Nov. 16, 1907.