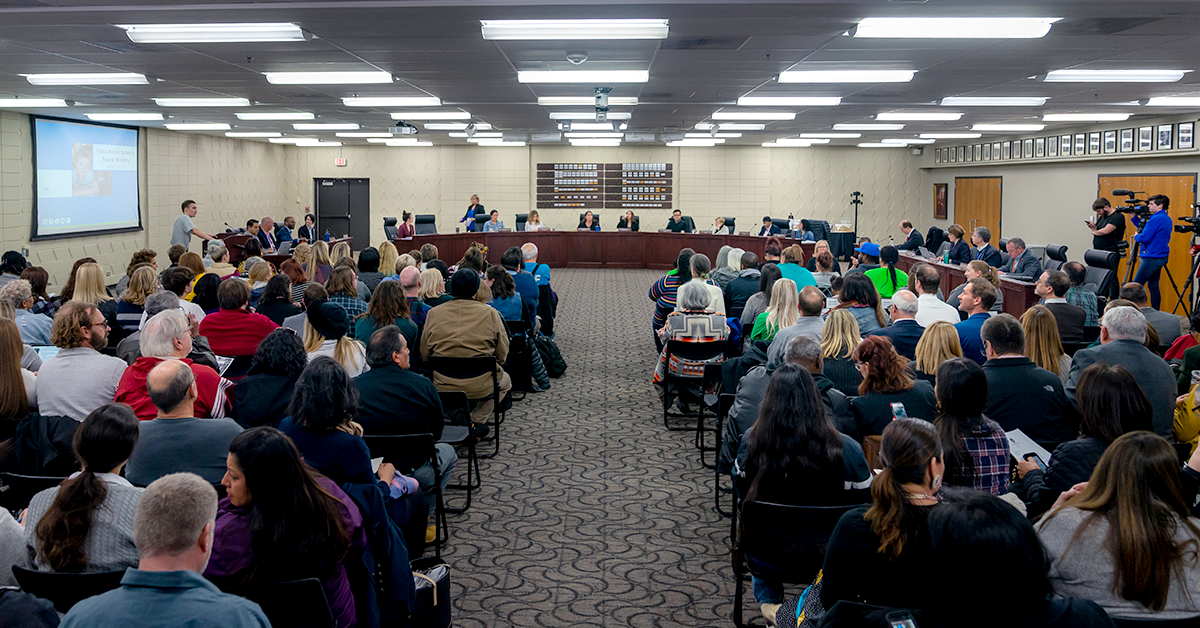 TULSA — In light of pushback over a proposed reorganization of its Indian Education Program, officials with Tulsa Public Schools are sitting down to talk with the Native community.

A community meeting is scheduled for 6 p.m. on Jan. 30 at the Wilson Teaching and Learning Academy at 2710 E. 11th St. The only item on the agenda is the proposed reorganization of the district’s Indian Education Program.

As part of its efforts to shore up a $20 million budget shortfall for the 2020-2021 school year, Tulsa Public Schools officials confirmed on Jan. 17 that 84 non-teaching positions across the district have been recommended for elimination. Among the employees receiving letters that recommended the elimination of their current job due to the budget crunch were the seven resource advisers for TPS’ Indian Education Program.

In addition, eight non-certified teaching assistants would be spread out across eight elementary schools to provide support in math, reading and cultural activities. Currently, the department has four non-certified employees paid for with Title VI funding who are tutors for Native students at specific sites within the district.

Indian hiring preference would not apply to the certified or non-certified positions in the department.

The proposed job elimination notice dated Jan. 14 that was given to the Indian Education resource advisers specifically states that the decision was made solely based on the district’s financial situation. However, in a Jan. 24 phone interview with Osage News, TPS Superintendent Deborah Gist said the proposed reorganization has a relationship with the budget crisis but is not directly caused by it.

“It is not driven by the budget,” she said. “It is based on improving access to resources.”

Instead, she attributed it to a combination of feedback from a fall 2019 survey that was open to the entire community to help determine budgeting priorities and a drop in Native student enrollment based on the 506 forms returned by parents that are used to determine federal and tribal per-pupil funding.

District enrollment overall has dropped by about 5,000 students since the 2004-2005 school year. Indian Education is not mentioned anywhere in the fall 2019 survey given to parents, students and community members.

“We are not eliminating services,” she said. “This structure is meant to improve services, even if we are having to work with fewer federal dollars.”

Aside from about $25,000 out of the district’s general fund to cover indirect costs, TPS’ Indian Education Program is funded entirely by federal and tribal dollars. District officials have maintained that they have honored all spending regulations that come with federal funds.

According to district data, 5.13 percent of TPS students are Native American with higher concentrations in the Daniel Webster and Edison high school feeder patterns in west and midtown Tulsa respectively. Other schools with sizeable Native populations include Bell Elementary on the northeast side and Mark Twain Elementary on the district’s northwest side.  The latter will be closing at the end of the school year due to the budget situation and consolidated with Wayman Tisdale Fine Arts Academy. Barring any substantive shifts in the two sites’ enrollment patterns after the consolidation, Wayman Tisdale would have the district’s third largest Native student body next year.

Should the proposed reorganization be approved by the Board of Education and the district’s Title VI and Johnson-O’Malley parent committees, no decision has been made as to which elementary schools would house the eight non-certified positions. Gist said those employees would not be limited to those eight specific sites.

She also reiterated that there would not be any interruptions in student programming, one of the questions raised by members of the Tulsa Native Youth Board at the Jan. 21 meeting of the Greater Tulsa Indian Affairs Commission.

Disclosure: Reporter Lenzy Krehbiel-Burton is a parent living in the jurisdiction of Tulsa Public Schools.