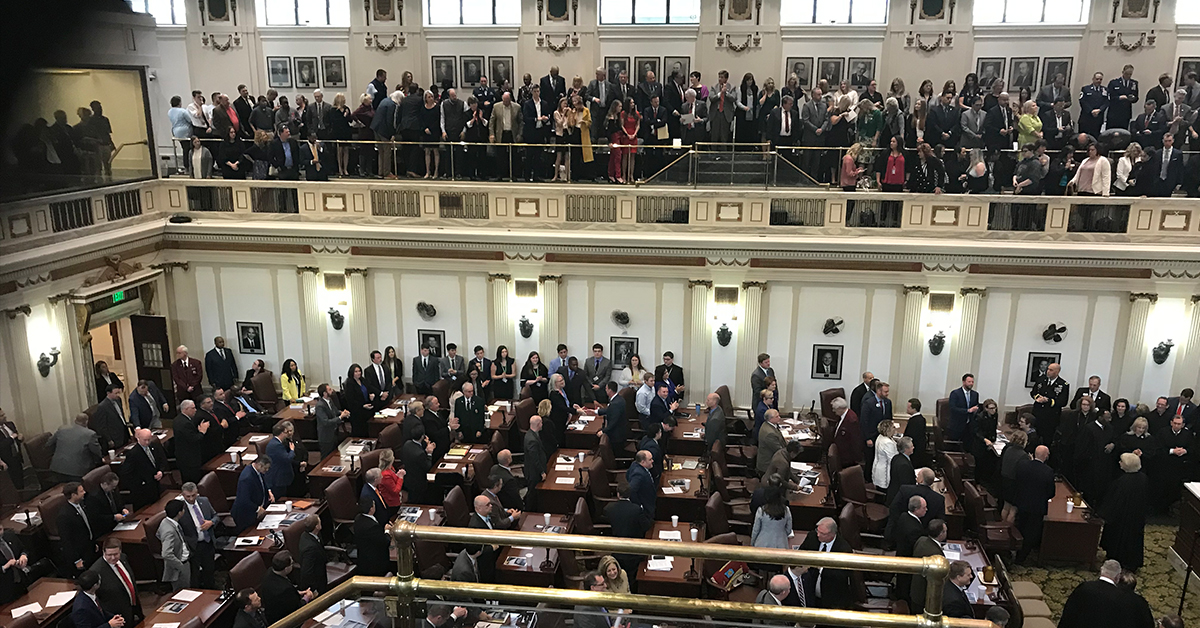 As part of his second State of the State address on Feb. 3, Gov. Kevin Stitt asked legislators to prepare for the possibility that the budgeting process for public education may be missing a few million dollars in the near future.

Addressing both chambers of the Oklahoma Legislature, Gov. Stitt asked the legislature near the end of his remarks to pass a bill that would allow the state’s remaining cash balance from 2019 and funds from the Revenue Stabilization Fund to fill in the common education budget should there be an interruption in Class III exclusivity payments. In 2019 alone, gaming exclusivity fees contributed $130 million to public education.

Although he acknowledged the tribal leaders on hand in the gallery, Gov. Stitt did not acknowledge tribal sovereignty in his address – just that of the state.

“As Governor, I remain supportive of the sovereignty of the state of Oklahoma and our right – and your duty as the Legislature – to oversee all industries operating in the state,” he said.

“I also remain confident the state and Oklahoma’s tribes can hammer out a compromise that is a win-win for all four million Oklahomans and we can accomplish this without putting public education in the crosshairs.”

Seeking higher exclusivity fees from the 30-plus gaming tribes across Oklahoma, Gov. Stitt has publicly maintained that the compacts expired on New Year’s Eve and that any Class III electronic gaming conducted after that date is illegal. However, it has been business as usual at tribal casinos.

Along with its author, former state Sen. Cal Hobson, state Speaker Charles McCall (R-Atoka) and House Minority Leader Emily Virgin (D-Norman), officials from more than 30 gaming tribes across Oklahoma have argued that the prerequisites for the compact’s automatic renewal have been met. The Cherokee, Chickasaw and Choctaw nations filed suit on Dec. 31, prompting a countersuit from the state. Motions to intervene are still pending from the Muscogee (Creek) and Citizen Potawatomi nations.

Gov. Stitt has not said explicitly what, if anything, he will do with the exclusivity fee payments from January revenue should Judge Timothy DeGuisti in the Western District of Oklahoma deny the state’s pending motion to create a trust for those funds.

Multiple tribal leaders have previously indicated their intent to continue remitting exclusivity payments by the deadlines laid out in the compact. In a written statement issued after the governor’s remarks, Oklahoma Indian Gaming Association chairman Matthew Morgan reiterated those plans.

"The tribes will continue to remit the revenue-shares due and owing under our renewed compacts. It is unfortunate to see Governor Stitt tie himself and the state budget in knots as he continues his refusal to acknowledge the plain terms of the agreement the state offered tribes 15 years ago. We stand with Oklahoma teachers and are proud of our contribution to Oklahoma's common education."

“Governor Stitt’s statement shows that he is not well informed of the sovereign status of the tribes and either insensitive or not knowledgeable of the difficult history of tribal relations with the state of Oklahoma,” he said.