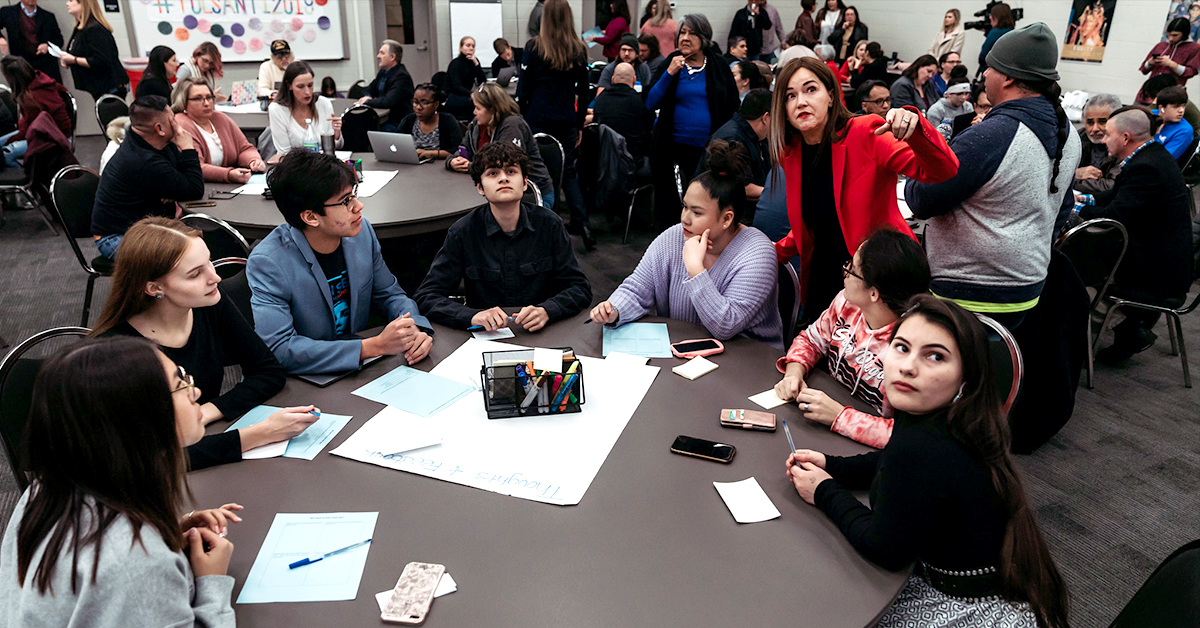 Caption photo: Tulsa Public Schools Superintendent Deborah Gist answers questions from the Native Youth Board at a community meeting to discuss the future of the Indian Education Program in Tulsa on Jan. 30. CODY HAMMER/Osage News

Packed into the Wilson Teaching and Learning Academy’s cafetorium, attendees largely made it clear to Superintendent Deborah Gist, school board members and other district officials, that they were not happy about the potential changes or the district’s communication efforts regarding the Indian Education Program.

“I’ve heard this is just the beginning of a conversation,” Muscogee (Creek) Nation Second Chief Del Beaver said. “I really hope it is. Partnership starts with honest, open conversation.

“It’s all about our kids. That’s what this boils down to.”

As part of its efforts to shore up a $20 million budget shortfall for the 2020-2021 school year, Tulsa Public Schools officials confirmed on Jan. 17 that 84 non-teaching positions across the district have been recommended for elimination. Among the employees receiving letters that recommended the elimination of their current job due to the budget crunch were the seven resource advisers for TPS’ Indian Education Program.

However, citing early feedback, the proposed reorganization presented to parents and community members on Jan. 30 differed from the one initially presented to the department’s staff on Jan. 15 and the Greater Tulsa Indian Affairs Commission.

Although it still calls for a reduction in resource advisers from seven to three, it also changes the number of additional non-certified teacher’s assistants that would be positioned at elementary schools around the district. Instead of eight as originally proposed, there would be six and a cultural enrichment specialist would be hired to work with Native TPS students across all grades. That position would be paid for with funds originally slotted for the other two teaching assistant positions.

Some of the remaining Title VI money would also be used to pay for more tutoring stipends. Currently, the district has enough funds to pay teachers across 21 sites a stipend for up to four months to provide after school tutoring for Indian Education students. The proposal as presented on Jan. 30 calls for expanding tutoring to every TPS site for eight months.

The initial proposal was based off of responses to a Title VI/JOM needs assessment conducted at the beginning of the school year. However, many attendees took exception to the methodology used to collect those responses, as the assessment was only handed out to parents who came to pick up school supplies from the Indian Education Program in August.

“So you’re telling me that the parents whose children didn’t need donated school supplies didn’t get to take this assessment?” an angry grandmother asked in disbelief. “I call BS on all of this and all of you.”

In addition to taking exception to the reorganization, many attendees also made it clear that they did not appreciate not being consulted earlier in the process. Under Title VI of the Elementary and Secondary School Education Act, school districts that receive federal funds specifically for Indian Education are required to consult with parents, teachers and tribal officials about how those dollars are spent.

Department employees were first notified about the reorganization efforts on Jan. 15, while the district’s parent committee was appraised in executive session two days later. TPS students were not formally approached prior to the community meeting and found out about the proposed changes from the resource advisers, much to their chagrin.

“This is all dealing with us,” Booker T. Washington High School junior Parrish Pipestem said. “Why were we not consulted too? We don’t want to just sit on the sidelines.”

District officials repeated several times at the listening session that the reorganization is due to a drop in Native student enrollment based on the 506 forms returned by parents that are used to determine federal and tribal per-pupil funding. District enrollment overall has dropped by about 5,000 students since the 2004-2005 school year.

Further limiting the budget are the state-mandated raises for certified teachers, including all seven resource advisers. Although the state required the raises, it did not include additional financial resources to cover certified teachers and administrators whose salaries are paid from federal funds.

District officials also reiterated that a reorganization is happening no matter what, although the specific structure could change. A representative for the district declined to say on Jan. 31 whether additional community meetings are planned to gather feedback on additional revisions or if the initial timetable is still in play. Originally, the reorganization was going to go to the Board of Education in mid-February.

“Changing the office and doing the reorganization has to happen,” Gist said. “We just do not have the money to maintain it the way it is now.”