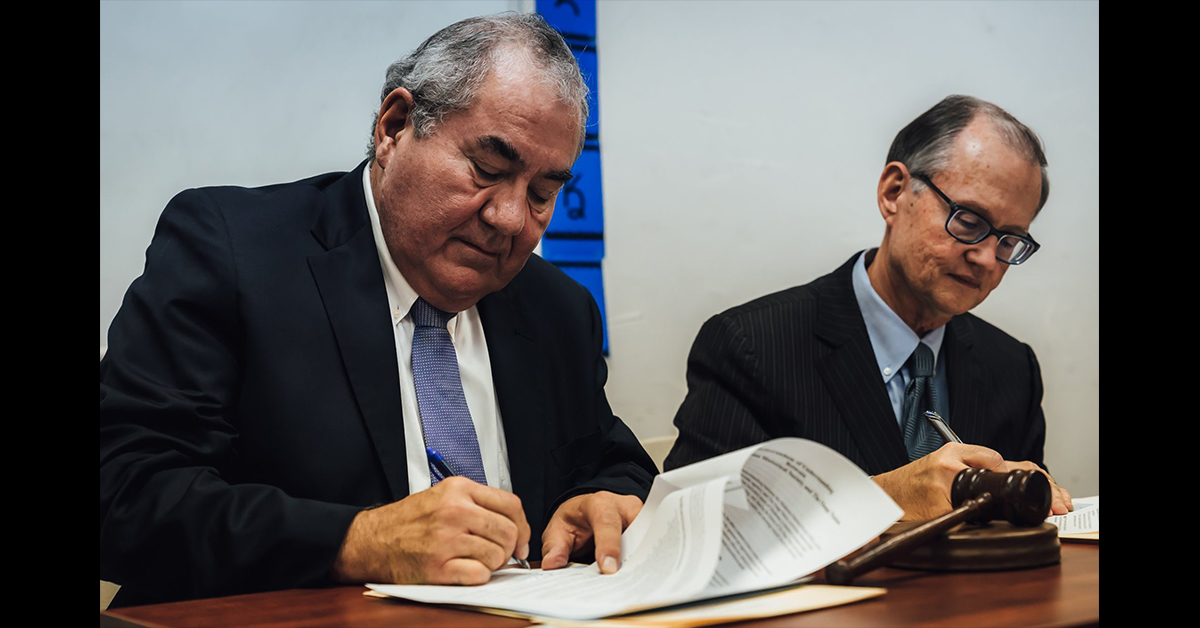 Photo caption: Principal Chief Geoffrey Standing Bear signed a Memorandum Of Understanding with the Oklahoma Historical Society on Dec. 18, 2019, in Pawhuska to share resources such as newspaper archives (early 1900s to present day) so Osage families can research their histories. CODY HAMMER/Osage News

The Osage Nation and the Oklahoma Historical Society are joining as partners to share archival information and resources thanks to a memorandum of understanding executed by both entities.

The OHS board of directors and staff visited the Nation on Dec. 18 and held its regularly scheduled meeting that day in a classroom at the ON Language Department. At the meeting, OHS Executive Director Dr. Bob Blackburn and Principal Chief Geoffrey Standing Bear signed the MOU, which was applauded by the board and ON cultural staff in attendance.

According to the MOU, the agreement is intended “to recognize shared missions in collecting, preserving and sharing the history of the Osage Nation and its people and to create a formal framework to enable and encourage mutually beneficial collaboration between the two governments.”

At the meeting, Standing Bear and other cultural department employees delivered brief presentations on their services in addition to the MOU signing.

Standing Bear welcomed the OHS officials to the Nation and asked them to see the various signs around the government campus and building, which include the Osage orthography and noted the language classroom is the “heart of the revitalization” of the language working in conjunction with the Immersion School and others in the Nation.

“You’ll see what we’re trying to do is make the Osage language the everyday language again,” Standing Bear said, adding the language orthography also has its presence online thanks to the two language smartphone apps.

Standing Bear also noted: “Several families told me how emotional it was when they said ‘let’s have a (Thanksgiving meal) prayer and they turned it over to a three or four-year-old who said the prayer for the family in Osage and how it brought tears to the eyes of the family because we haven’t heard the Osage language as a daily language since the 1970s.”

ON Language Director Vann Bighorse told the OHS officials the Nation’s 2006 Constitution also calls for the preservation of the Osage language. The section of the Constitution is under Article XVI – Osage Culture and Language, which reads: “The Osage people have the inherent right to preserve and foster their historic linguistic and cultural lifeways. The Osage Nation shall protect and promote the language, culture and traditional ways of the Osage people.”

As for language outreach, Bighorse said the Nation is aware computer technology is part of the future and so there are online classes in addition to the local in-person classes. He told the OHS officials that more than 1,000 people have taken language classes (community and online) through the years, noting the teachers are former language students as well.

“These (orthography) characters are the sounds of our language and we realize ABCDEFG (spells) a word and so our master speaker (language master teacher Herman “Mogri” Lookout) and some of our folks came up with a sound system for the Osage language, so we have community classes here,” Bighorse said in describing efforts to teach and preserve the Osage language because “it’s who we are, it’s what makes us unique.”

Addie Hudgins, director of the Wahzhazhe Cultural Center and ON Visitors Center, said the WCC offers classes teaching Osages how to make dance clothing as part of cultural preservation and there is a library with resources and efforts are underway to digitize many of those items which include old photos, recorded audio and videos that touch on the Osage language/ oral history/ culture.

Marla Redcorn-Miller, director of the ON Museum, said the entity has been telling its own story since 1938, making it the oldest tribally-owned museum in the country. She noted the museum started as a repository for information and artifacts collected over time and those items are now used by the WCC and the Osage history is shared today thanks to those preserved historic items and “museum best practices.”

Redcorn-Miller said the museum establishes stories, which are made into exhibits displayed in the museum, which includes the revolving exhibit currently on display honoring Osage military veterans, which opened in November 2019.

John HorseChief, a WCC instructor, applauded the MOU as an effort “to reach out to all our members across the United States … I can’t wait to see how this enriches our state and our tribal members.”

Standing Bear said the Nation is pleased to have the seasoned Osage employee presenters who share their expertise at work each day. He also acknowledged the ON Congress, which appropriates the Nation’s funds each fiscal year when they approve government operations budgets.

The Nation receives limited funding from the ON Gaming Enterprise and “as you can see, this is where our gaming money goes … we’re going to concentrate on the culture and language and focus on the children because they’re the future – 50 years in the future is standing right there in front of us, so that way we can take care of the present and the future,” Standing Bear said.

As part of the MOU, both the Nation and OHS agree to share information and resources, which include:

- The OHS will, at its own expense, digitize the full run of three newspapers in the towns of Pawhuska, Hominy and Fairfax, from the earliest surviving issues in the 1890s or 1900s to 1964. Once digitized, with all metadata finding aids, the newspapers will be searchable in the online Oklahoma Gateway database.

- The OHS shall, subject to staff/ budget availability and mutual agreement, loan or duplicate for the Nation’s use selected artifacts and archival materials from the OHS collections as may be agreed upon by both parties.

- The Nation will encourage Osages to use the genealogical and historical resources at the White Hair Memorial (located between Hominy and Fairfax) to advance their knowledge of family, clan and tribal history.

Blackburn said the MOU signing is “an expression of respect and identifying where we have mutual benefits and can work together and I think that’s been missing in relationships with Indian tribes for 250 years. If we had always gone a little extra distance and found ways to work together, think of where we would be now? But it’s not too late. Our generation will be changing things and change things even more… This (MOU) is the spirit of what we should be doing.”