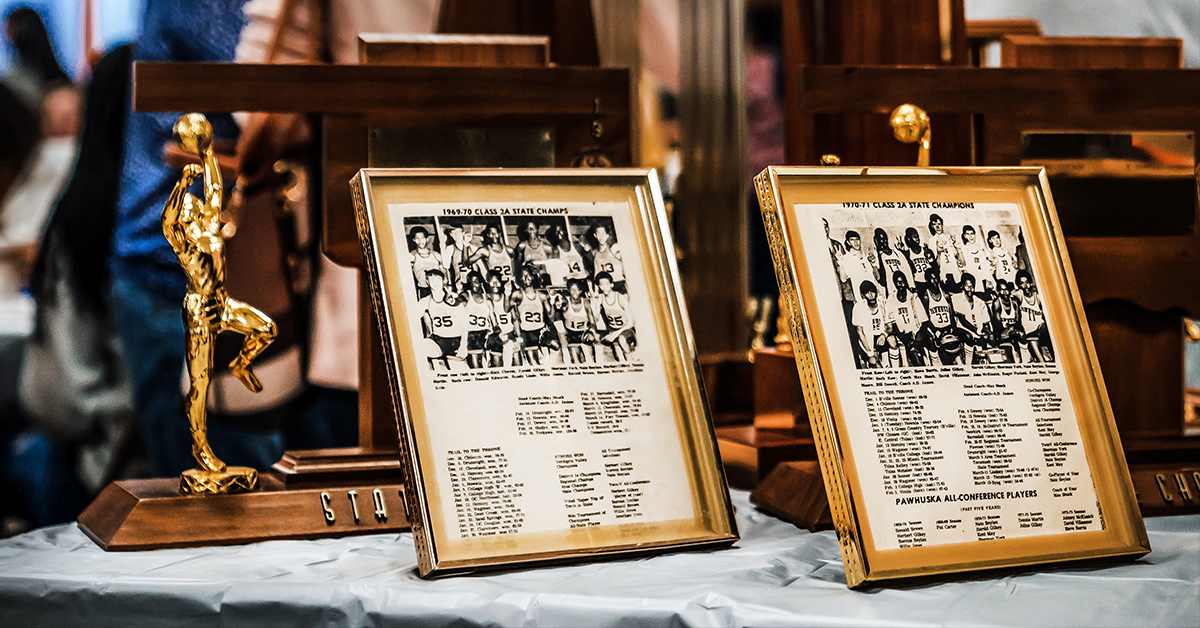 Photo caption: A table full of State Championship trophies and photos of the inductees was displayed on Feb. 7 at the Pawhuska Basketball Hall of Fame honors banquet in the Pawhuska elementary cafeteria. CODY HAMMER/Osage News

Walking into the Pawhuska Elementary cafeteria on Feb. 7, one was met with a sea of orange and black. A table full of State Championship trophies and photos of Rodney "Steve" Burris, Lynn Star McGuire Holloway and James Miles were on display.

Established in 2006, the Pawhuska Basketball Hall of Fame pays tribute to former Huskies that demonstrated honor and brought achievement to the school. Pawhuska’s school history includes basketball state championships in 1961, 1970, 1971, and 1973. They were also state runners-up in 1960 and 1962. Burris (Osage), and Miles were part of the 1971 and 1973 state championship teams. McGuire Holloway (Osage), was a dominant post player that continued her basketball career with a full scholarship to Claremore College.

“The Pawhuska Hall of Fame was created as something to endear the greatness of Pawhuska basketball. As a youngster I watched all these great players,” said Sean McGuire before introducing McGuire Holloway. “We had so many great players, it was unbelievable.”

He said McGuire Holloway was an unselfish player, who threw the ball to everyone. “You heard the phrase ‘A rising tide lifts all boats?’ Well, she was the rising tide.”

McGuire Holloway, a native Pawhuskan and a 1981 graduate began playing basketball in the 5th grade as an Indian Camp School Maiden under Coach Jim Javellas. In the 9th grade she played post on the Junior varsity and averaged 18 points per game. She was selected by Coach Max Shuck to practice and play with the varsity.

“I didn’t get this honor by myself; it was a team effort,” she said. “I wouldn’t have gotten very far without them.”

She also spoke with emotion about her father, and the work ethic he instilled in her. McGuire Holloway was also the 1980 World Champion Barrel Racer and 1993 & 1995 World Champion Break-Away Roper “Undisputed Women’s Steer Roping Champion.” She recounted once when she broke her ankle and was sidelined from playing basketball, but that didn’t stop her father from fashioning a stirrup that could fit her cast so she could practice racing her horse every day after school. She said she loved basketball and it was a privilege to play.

“My basketball career was an adventure, a great adventure. And, getting to play in front of all of you, my hometown … I just wanted to win. That’s all I wanted to do. But playing in front of you all was very special to me,” she said. “There were times and experiences that forced me to grow up in ways I never dreamed of. The game teaches you about life, commitment, perseverance, and co-existing with others.”

The second inductee was James Miles. Miles graduated from Pawhuska High School in 1974 and was a starter on the 1973 Pawhuska State Championship team. He was named to the Oklahoma State Tournament All-Tournament Team.

Miles doesn’t come back to Pawhuska often and after high school he earned a bachelor’s degree from Oklahoma City University in Cell Biology with a focus in Molecular Cell Biology and Chemistry. His career has taken him all over the world with a current position at Montrose Medical Center in Montrose, Colorado. Being a laboratory specialist for 17 years in chemistry, microbiology, histology and hematology, he and his colleagues are implementing a completely new computer platform called EPIC, which will integrate the information flow between physicians, nurses, directors and personnel of a hospital.

Receiving the recognition for his high school basketball talents and seeing his hometown friends overtook him.

“I will say this, we were a very tight-knit group. Through sixth grade, and due to integration, so I grew up with these guys,” he said, becoming emotional. “I didn’t know what to expect when I came here but I didn’t expect to see everybody.”

He said he never stopped loving basketball and is still an all-around sports enthusiast. He no longer plays but remembers the championship team he was on in Pawhuska. He said while attending OCU, he was recognized as being a player from the Pawhuska Huskies state championship team.

“Work hard. That’s what we did,” he said to the students seated in the audience. “Teams in our own class didn’t want to play us, so we had to play big schools. We kicked their butts. We didn’t have anyone that stood out, but we played as a team … it didn’t matter, we were brothers.”

Rodney “Steve” Burris was the last inductee. He attended Pawhuska High School 1969-1973 and played for the State Championship Basketball teams of 1971 and 1973, coached by Max Shuck. He appeared in Tulsa’s Tournament of Champions twice, finishing as runner-up in 1973. He was named to the Verdigris Valley All-Conference team in 1973.

“First of all, I’m a big believer that the people around you make you who you are; and the tradition and those kinds of beliefs, they steer you in the right direction and that’s what this is all about here in Pawhuska,” he said.

Burris began playing basketball while attending the Immaculate Conception Catholic School in Pawhuska before moving on to Pawhuska High School. He excelled in basketball from an early age and only improved and came into his leadership role under Coach Shuck. “I worked my butt off to be the best leader I could,” he said.

He remembers playing most of their games in Tulsa and Oklahoma City against bigger teams. He told stories about their camaraderie, their competitiveness and their drive to win. He said there were away games they traveled to where it was only Huskie fans in the gym, that’s how supportive the community was of their team. The community would also book their hotel rooms in Oklahoma City a year in advance because they knew the team would be playing in the state championships.

“It was a tradition, you had to live up to that tradition,” he said.

After he graduated from high school he attended and earned his bachelor’s degree from the University of Oklahoma. He competed in Indian League basketball, playing with the Osage Warriors and qualified for the national tournament several times. Steve has one son, Stephan, who also played at Pawhuska High school and five basketball playing grandchildren, one of whom currently plays basketball for Skiatook High School.