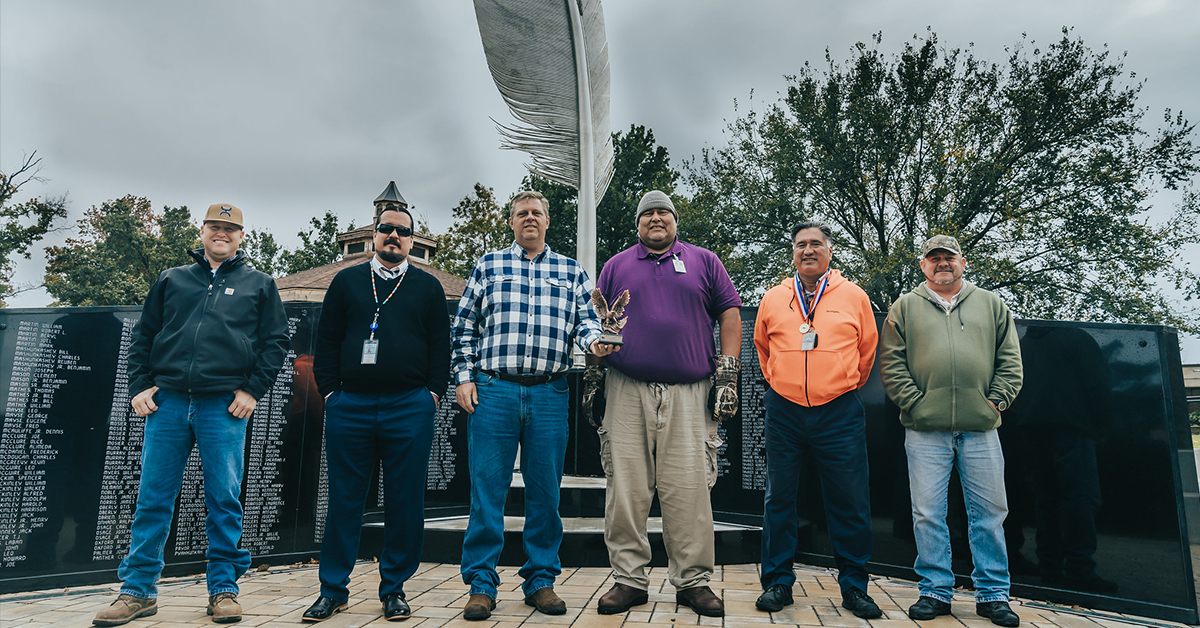 Osage Veterans Memorial recognized by ABC of Oklahoma for design

Photo caption: The Osage Nation Tribal Development and the ON Roads Department worked in conjunction with Builders Unlimited Inc. in constructing the Osage Veterans Memorial that received an ABC Excellence in Construction award. CODY HAMMER/Osage News

The Associated Builders & Contractors of Oklahoma recognized the hard work and design of the Nation’s Osage Veterans Memorial at their annual awards banquet.

Builders Unlimited Inc. received an Excellence in Construction Award from the ABC of Oklahoma in the Other General Construction, Memorial category in October. They also recognized members of the Veterans Memorial Commission, as well as Talee Redcorn and Ross Smith who work for the Nation’s Tribal Development and Land Acquisitions department and the role they played in overseeing the construction of the memorial.

The memorial commission worked for months on the design.

“The Osage Nation worked closely with the veterans' commission to complete this. It was kind of a difficult project,” Redcorn said. “The veterans' commission, namely (Frances Williams) wanted the water features involved for kind of a soothing, comforting aspect in our nation for any returning veterans coming home from war, now and in the future. So, the engineering group, Wallace Engineering, tried to put that element into the memorial.”

The result is a memorial that receives hundreds of visitors per week to the Osage campus.

Located just footsteps from the Osage Nation Museum on the ON campus, the Osage Veterans Memorial is circular in size and comprises several granite walls with veterans’ names organized by military branch of service, according to a previous Osage News article. The centerpiece of the memorial is an approximately 20-foot eagle feather sculpture with nighttime lighting for the memorial features, including its flagpoles for respective military branch flags. The memorial stretches across 66 feet and extends four feet below ground. There are over 1,200 Osage veteran names inscribed in the memorial.

Redcorn said Builders Unlimited and the TDLA department each received trophies and medals at the awards banquet.

ABC of Oklahoma is the association of professionals promoting the advancement of the construction industry and free enterprise by providing opportunities for education, networking, government affairs and political action, according to their website.