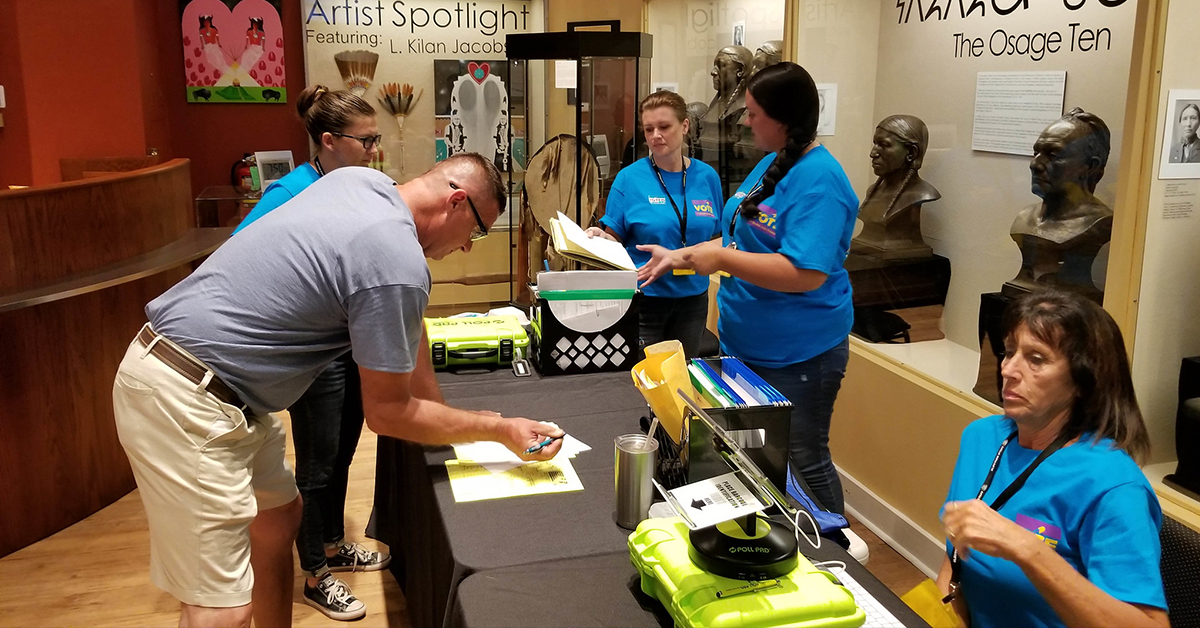 The June 1 Election Day polling site will be open to Osage voters from 8 a.m. to 8 p.m. Afterward, the ON Election Board and office staff will generate the voting results, which will be announced in front of the Chambers Building on the ON government campus as done historically in past elections.

According to the Election Day worker application, work duties include: Setting up and breaking down election equipment at the polling site; Maintaining election equipment security throughout the day; Thoroughly reviewing and completing all election forms; Checking in voters through use of identification and poll lists; Assisting voters during the voter process by explaining equipment usage; Closing the polling site at the end of voting period; And attending mandatory training.

The application deadline for those interested in serving as Election Day workers is March 31.

“If you are interested in working (June 1), please submit the (application) form provided by the deadline to the Osage Nation Election Office located at 608 Kihekah or scan and email it to electionoffice@osagenation-nsn.gov,” the announcement reads.

On May 27, the Election Office will hold a lunchtime training and more workday details will be provided for selected applicants.

The election worker application also notes professional work skills and abilities that will be considered in selecting workers, which include: Basic computer skills; attention to detail; Must be willing to work 12-14 hours on Election Day or more, if necessary; Excellent interpersonal skills in order to interact and deal effectively with voters, co-workers and electioneers; Ability to comprehend and follow instructions given by the Election Supervisor and other Election Board and office team members; Occasional lifting and carrying objects such as election equipment and supply boxes; And ability to recognize election issues and to promptly report any issues to the Election Supervisor or Assistant Election Supervisor as necessary.

Election workers will receive compensation for their services and the Election Office will provide meals and refreshments throughout the day for the workers and office staff.

In addition to workers, the Osage election code also allows candidates to designate one poll watcher at the polling place who must follow the election law regarding the post. The Osage election code regarding poll watchers states that candidates seeking executive or legislative office “may submit the name of one person as their designated watcher at each polling place. No candidate for any elected office of the Osage Nation shall be a watcher. Watchers are prohibited from using all electronic devices, conversing with voters and election officials, and divulging any information as to the count prior to the (election results) announcement by the Board. A watcher shall not return to the polling place after leaving. Any disruption by watchers will be cause for their removal from the polling place. Poll watchers are to remain only in designated areas. Watchers shall not receive compensation for their services.”

For more information on the elections or to register or update addresses for voting, and to request absentee ballots, contact the Election Office toll-free at (877) 560-5286 or visit its current website at www.osagenation-nsn.gov/what-we-do/elections