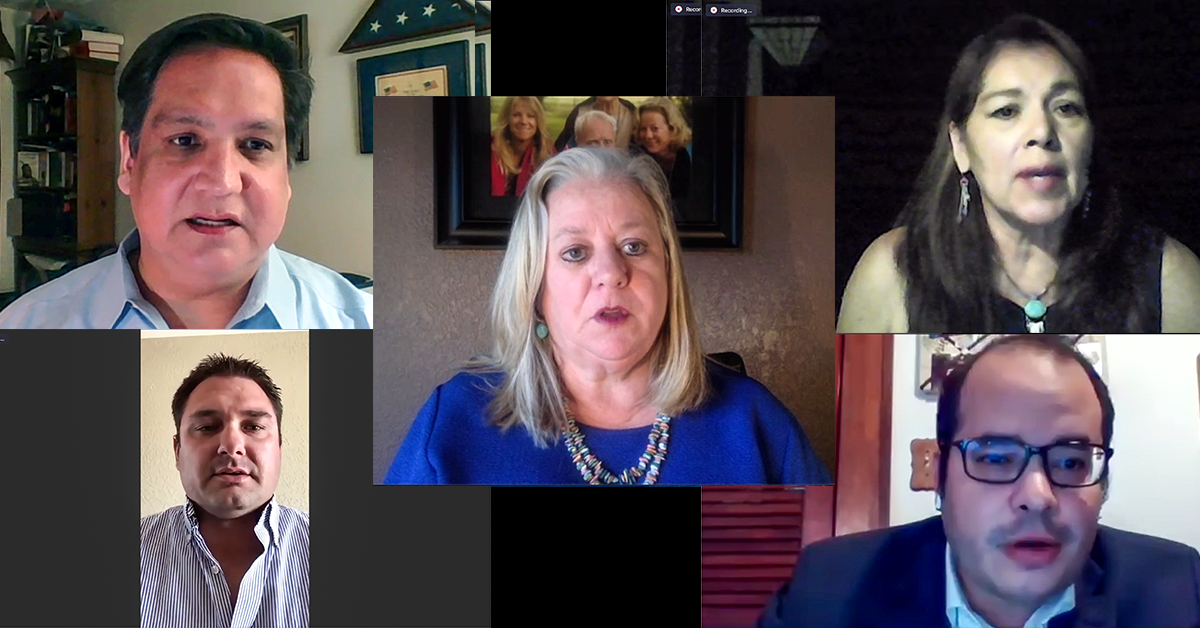 Instead of taking to the podiums, Osage Congressional hopefuls took to their laptops and smartphones for the Osage News’ candidate debate.

Due to COVID-19, the Osage News editorial board voted in March to cancel the in-person debates scheduled for April 4 at Osage Casino Tulsa. Instead, the debates were postponed to April 25 and moved to Zoom.

“We miss hosting you all in person and enjoying our beautiful casino facilities,” Osage News editorial board vice chairwoman Tara McLain Manthey said. “We also regret we’re not able to have our live audience of our friends and family with us, but we’re keeping everyone as safe as possible right now.”

Debate questions were submitted by Osage citizens and vetted by the editorial board as part of an April 22 meeting. Asked to moderate for the debate was Sterling Cosper, programs director for the Native American Journalists Association.

Attendees were allowed two minutes for each question and introductions, plus one minute for rebuttal. The 15 candidates were divided into three groups of five alphabetically by last name. At the top of the debate, the first person in each group was asked to pick a number to determine which five questions their quintet would answer.

For more than an hour, Michael Bristow, Melissa Dailey, Shannon Edwards, Colt Herren and Billy Keene answered questions about economic development, potential gaming expansion, the role of Congress and COVID-19 testing for Osage Nation employees upon the re-opening of the tribal complex.

With all five candidates acknowledging the Osage Nation’s looming financial crunch due to the pandemic, several expressed interest in having the tribe diversify its revenue stream through agriculture opportunities, such as industrial hemp, or by building a hotel in Pawhuska to capitalize on the recent increase in tourism-related traffic.

In addition to opening up the Wah-Zha-Zhi Health Clinic to non-Indigenous patients, Bristow suggested that the nation diversify its business portfolio through financial institutions.

“This pandemic has made our businesses shaky at best,” Bristow said. “The Osage Nation could benefit from having a banking system or lending institution to assist tribal members with housing and small business loans. It would also allow nation to invest in its citizens.”

With the Osage Nation campus largely closed through May 11 due to the ongoing pandemic, the candidates all agreed that some form of widespread testing, either through the Wah-Zha-Zhi clinic or in partnership with other entities, needs to occur before employees return back to work.

“I think for employees coming back…if they have quarantined themselves and used proper social distancing while off work, it can be a benefit,” Herren said, while encouraging the use of antibody testing. “If they’ve been out running around, there needs to be a test. It depends on the job as well. If it’s employee who is by themselves all the time, don’t want to force the issue. If they’re in an office, then possibly. It needs to be left to the employee personally. I don’t want to force a test on anyone who doesn’t want it.”

The candidates were also asked if they would unconditionally support any efforts from executive branch and gaming leadership to expand Osage Casinos in to Missouri. The tribe previously hired lobbyists and met with community leaders in Cuba, Missouri, about 80 miles southwest of St. Louis.

Although the concept had support from Herren, Bristow, Keene and Dailey, the question’s use of the word “unconditionally” drew some raised eyebrows across the board.

“I love my kids unconditionally. That word … I just can’t say unconditionally,” Keene said. “Obviously, there would be some conditions. Has there been a feasibility study done? What kind of ROI [return on investment] are we expecting? We’d also have to consider the feds right now, as we’d have to take land into trust and that’s not always a smooth process.”

The fourth question focused on the role of Congress beyond its obligations to approve the tribe’s annual operating budgets.

For a final question, the five candidates were asked which of the “Big Three” programs they would eliminate if the tribe’s financial status reached a point that it could not maintain funding levels for its burial assistance fund, health benefit card and college scholarship program.

All five stressed that they were not actively looking to cut or reduce any of those services. However, citing the availability of external opportunities, Bristow, Dailey, Herren and Keene all said they would reduce or eliminate the scholarship program if the funding situation became that dire and no other alternatives were available.

Edwards did not identify a program. Instead, she said she would look for other areas to cut funding first.

“Our main revenue source is gaming,” Edwards said. “Under the Indian Gaming Regulatory Act, that money has to go to the general welfare. When you look to how you provide for the general welfare, in my mind, it’s direct assistance as set forth in the constitution. When you talk about cutting back or eliminating, I would push back and look for inefficiencies to cut first.”