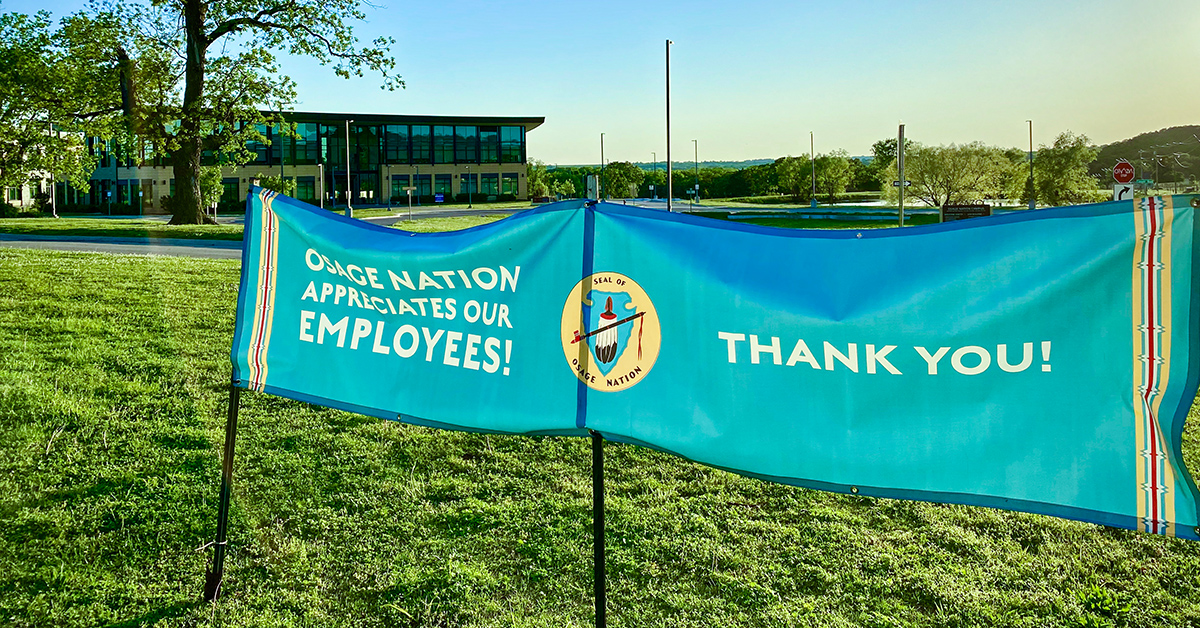 Like the rest of the country, the opinions among Osages are split on whether the Nation is reopening its offices to the public too soon. The Oklahoma State Department of Health is reporting a spike in COVID-19 cases around the state after Gov. Kevin Stitt partially reopened on April 24, but Osage County has maintained steady numbers.

There is data to support both sides of the argument and Osage Nation officials didn’t come to the decision lightly, said Dr. Ron Shaw, Wah-Zha-Zhi Health Center CEO and Chief Medical Officer.

“I was consulted about the re-opening of the Nation for May 11 and as you may know, the WZZHC is resuming routine medical appointments on that same date,” Shaw said. “The curve has been sufficiently flattened such that there is adequate hospital capacity in Tulsa and Jane Phillips Hospital for a surge, which is the primary purpose in a ‘lockdown/shelter in place’ strategy. The opinion or recommendation from some medical experts that a shutdown/lockdown saves lives is without proof or evidence.”

Shaw said he believes the extraordinary measures of a shutdown/lockdown postpone cases or postpone death until later in the ensuing months but doesn’t ultimately reduce the total number of deaths in a pandemic.

“A death averted in April postpones that death until August or later. Some have used the analogy that our response should be commensurate with a ‘marathon, not a sprint,’” he said. “Finally, an unintended ‘side effect’ of the recent lockdowns has been increased fatalities from heart attacks and cancer as many frightened patients have postponed coming in or ignored warning symptoms of worsening disease out of fear of coming in for acute care of life-threatening illnesses.

“We may have postponed deaths for now but incurred deaths from other causes in the process. There is no risk- free strategy.”

According to a tracking poll by the Kaiser Family Foundation, “One-third of adults (34%) say they have been unable to get needed medical care unrelated to coronavirus ... and one-fourth (24%) say they were unable to get prescription medications.”

Osages took to Facebook to express their opinions about having to submit to a COVID-19 test before returning to work. Opponents to the testing said it was a waste of resources and the tests should be saved for those who need them, among other arguments.

On May 8, the OSDH announced the rollout of “Caring Vans,” which is an initiative with Blue Cross Blue Shield to encourage testing for all Oklahomans. The goal is to test 90,000 Oklahomans during the month of May. The vans provide free COVID-19 testing and is open to everyone, whether they are symptomatic or not, according to the OSDH.

“As the state enters the first phase of a measured reopening, testing becomes even more vital to health officials and Oklahomans who use data to make informed decisions to protect health,” said Health Commissioner Gary Cox. “We want everyone to get tested, regardless of whether or not they are currently showing symptoms, so we can improve early detection of new clusters and hot spots as they arise and aggressively mitigate spread.”

Shaw said that one infected employee could infect up to 10 other employees and he believed pre-testing is a reasonable risk reduction strategy to protect returning employees. As of May 7, 452 employees had been tested and 5 came back positive; 7 tests are pending, and the rest were negative. All 5 of the employees who tested positive did not report or show symptoms at the time of the test.

“We are well aware that a negative test does not mean that employee is immune but rather that the employee was not infected on that day of testing,” Shaw said. “A return-to-work strategy that includes monitoring for symptoms, social distancing, keeping older employees under the strictest precautions and prompt testing and isolation of any symptomatic employees is a reasonable and effective strategy in protecting employees.”

On May 7, Director of Operations Casey Johnson released a one-page “Guidance for Returning to Work” to all the Nation’s employees.

Employees over the age of 65, and those employees with underlying health conditions that could have life-threatening complications from COVID-19, will continue to work from home. Face masks are encouraged by not required, according to the guideline. Plexiglass panels are being installed to help separate employees from the public and masks will be delivered to departments as soon as they are available.

“I recommend following the 6-foot social distancing rule, striving to not stay any closer than 6 feet of others and if absolutely necessary, to spend no more than 10 minutes in close proximity,” Shaw said. “Masks are strongly recommended, and cloth masks are acceptable for this environment. Self-reporting of symptoms such as fever, chills, headache, persistent cough, unexplained shortness of breath, muscle pains, sore throat and alterations of taste or smell should be undertaken promptly to include consultation with employer and medical provider before reporting to the worksite.”

Employees are encouraged to offer as many services to the public via phone, email, or drive-up means.

Although most of the Osage Nation campus is preparing to open on May 11, one office will remain closed until further notice.

On May 8, the Osage Minerals Council announced via social media that it will not reopen its office on May 11. However, its staff will still be available via phone or email, including to help with revocable trusts.

Thanks to the ongoing pandemic, the Osage Minerals Council office has been closed to the public since March 16.

The council also announced on May 8 that the June payment will be $2,950 for a full headright, a decrease of $620 from March.