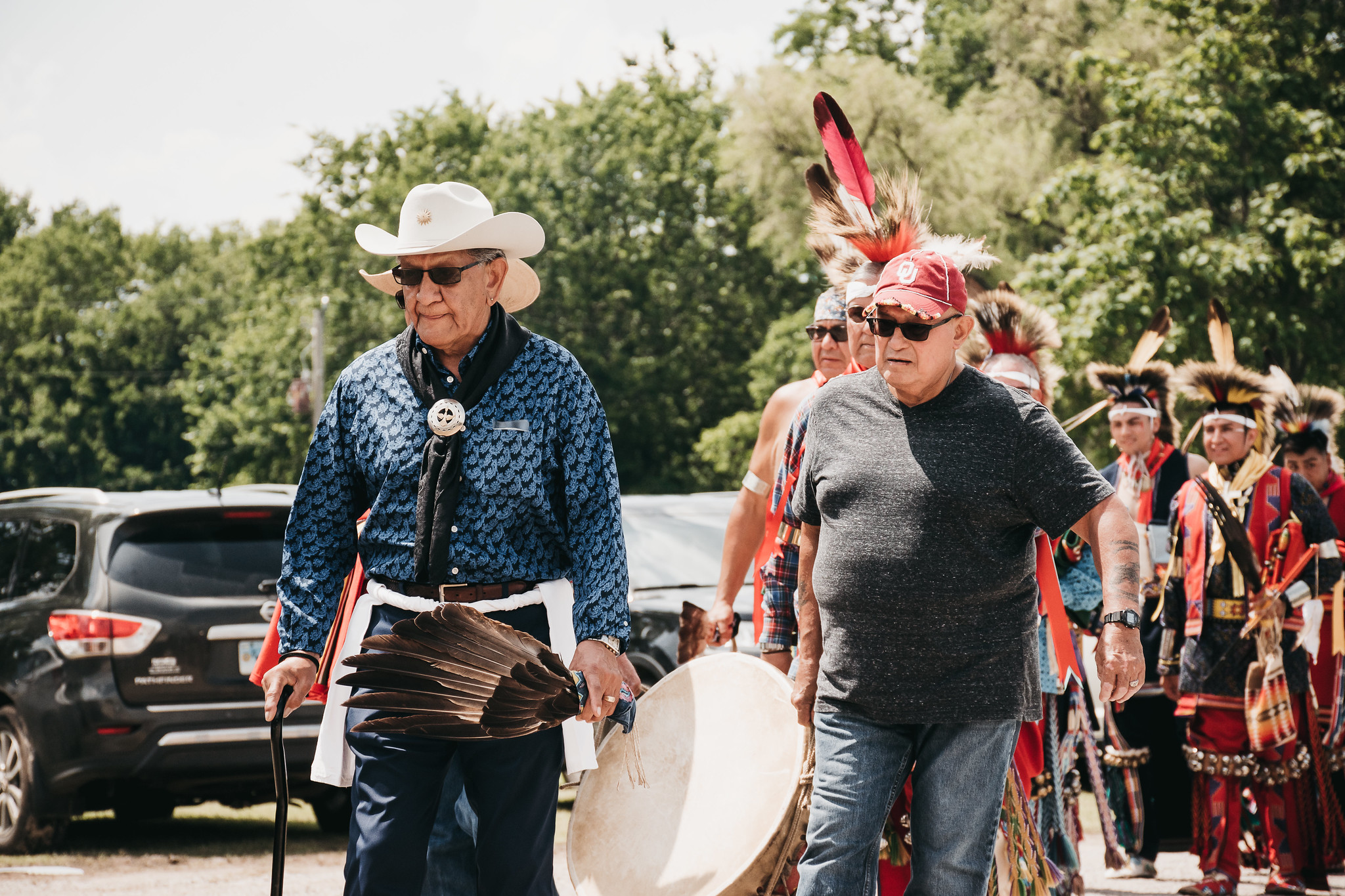 Photo caption: The Grayhorse and Pawhuska districts have postponed their dances till further notice due to the coronavirus pandemic. Pictured is Town Crier Caesar Williams walking ahead of the process of the Grayhorse District on June 7, 2019. MORGAN KIDDER/Osage News

The Drumkeepers of the Grayhorse and Pawhuska districts have postponed their annual Inlonshka dances for the safety and wellbeing of Osages everywhere.

The dances bring Osages back to the reservation each year from all over the world. The dance has great meaning for many Osages, whether it's dressing in traditional clothing, listening to songs, or dancing with family and friends. It is a time for fellowship, a way to immerse in Osage history and a time to remember who we are.

The global COVID-19 pandemic is interrupting that fellowship this June, but it’s not the first time Inlonshka has been postponed. Osage elder and former Pawhuska District Head Committeeman, Eddy Red Eagle Jr., said it isn’t unusual for a Drumkeeper to postpone the dance.

“There’ve been a number of times in my lifetime, four-to-five times easily, we’ve chosen to postpone, the Drumkeeper did. So, it’s not an uncommon affair,” he said. “And, that’s where the experience of the committee plays into the question of the day and that’s where the experience of the Drumkeeper plays into it. That’s why when you pass the drum you pass it to a family who is acquainted with the protocols of what we do.”

The Inlonshka was adopted from the Kaws and Poncas in the 1880s when the Poncas brought a drum to the Grayhorse people and the Kaws brought drums for the Hominy and Pawhuska people. The Osage have been dancing ever since, with the Inlonshka only changing slightly over the past 130 years.

The Osages’ strict adherence to ritual and religion has been written about by Omaha ethnologist Francis La Flesche, who studied the Osage in the late 1800s and early 1900s. That same strict adherence to rule and structure can be seen today in the Inlonshka and the Native American Church. Both have been written about by Dr. Garrick Bailey, a social anthropologist at the University of Tulsa, and Dr. Daniel Swan, curator of ethnology for the Sam Noble Natural History Museum at the University of Oklahoma.

Historians are quick to point out that contemporary Osages carry the teachings of their ancestors in their Osage language and their collective knowledge of their traditions since the Osage did not keep a written history.

A state of mind and being

“When you take that drum, it’s not just the Drumkeeper who takes it, it’s the whole family. That whole family takes that drum and cares for it. The way we see it, it becomes a member of your family and you get very close to it the years that you have it. You do everything you can to accommodate its movements in a positive manner,” Red Eagle said. “When everything is clear, the way we see it, you’ve touched all the bases, you’re in good order, then it’s a good time to dance. If you go against that old golden rule, it becomes more of a challenge, it becomes more difficult. They’ve learned that over time.”

Red Eagle said postponements in the past usually were the result of a death in a Drumkeeper’s family, and if he didn’t want to dance then they didn’t dance. When asked if the dances were ever postponed due to war, Red Eagle said he knows they danced during the Korean War and the Vietnam War. He was born shortly after WWII ended. He remembers stories of Leo Miles, who took the drum during wartime and kept it going throughout, even though the dance was very small because many of the young men were off at war.

With the particular threat COVID-19 poses to Osage elders, social distancing guidelines would not be practical at the dances. Up to 1,000 people can be in attendance at one dance on a Saturday night. There are also factors of everyone’s state of mind that is important, Red Eagle said.

“We learn our history; we learn from our experiences. They could stubbornly go in and dance, but the spirit wouldn’t be there,” he said. “The feeling of positivity, the feeling we get when we dance, we would be preoccupied with other things. Because when we dance the most important thing going on is the dance. We give it all our efforts, all our attention and activity to the dance and in that time period.”

In essence, it wouldn’t make sense to hold a dance that encapsulates the Osage way of life, state of mind and wellbeing when there is so much uncertainty, fear and concerns surrounding the pandemic.

“So, what we’re seeing right now, affects the thoughts of not only the Drumkeeper but our whole community,” he said. “This justifies the means of why you wouldn’t want to dance at this time. So, that’s how it justifies the postponement to another day.”

[Editor’s Note: The Hominy district has not announced a date for their dance or a postponement due to cultural reasons within their district, which we will not publish here due to cultural sensitivity.]