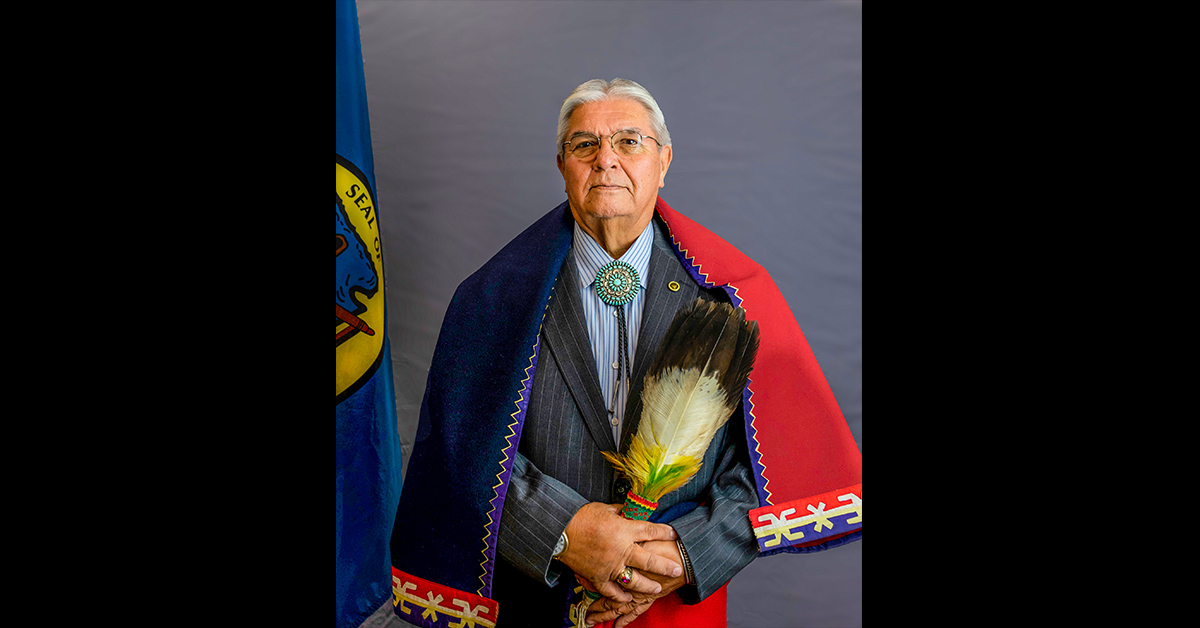 Before adjourning the 2020 Hun-Kah Session, the Sixth ON Congress honored Archie Mason, one of the longest-serving members, before he retires with his third term ending this summer.

Mason, a seasoned and retired Tulsa education professional, is stepping away from tribal office when the Seventh ON Congress members take their oaths on Inauguration Day scheduled July 11. In January, Mason announced that he would not be seeking re-election as the 2020 candidate filing period neared.

“I am retiring from tribal politics. I have fourteen years of service to our Nation's government and feel I have completed my time,” Mason said. “It has been a good run for me with no regrets and I have finished the race. Amen.”

First elected in 2006 when the reformed Osage government launched, Mason also won re-election in 2012 and 2016 and has served in various capacities, including Congressional Speaker twice and chairman of several Congressional committees through his years of service.

Mason has been an educator for 34 years. He’s taught in Tulsa Public Schools and taught higher education at Rogers State University. His accolades include recognition as Outstanding Indian Educator of the Year, Chaplin of the Day at the Oklahoma State Legislature in 2014 and he has served on various boards and commissions throughout the region.

On April 27, the final legislative item for Congress to consider in the Hun-Kah Session was ONCR 20-15 (sponsored by Congresswoman Shannon Edwards) – “A resolution to honor Archie Mason and express appreciation and gratitude to him for his service to the Osage People as a member of the Osage Nation Congress from 2006-2020.”

Due to the COVID-19 pandemic prompting healthcare officials to recommend social and physical distancing guidelines, the Congressional session took place by video and teleconference means. Following the final session day’s votes on other legislative items, Edwards presented ONCR 20-15. Afterward, the fellow Congress members expressed their gratitude and heartfelt thanks to Mason before unanimously passing the resolution.

“In his almost 14-year tenure as an Osage Nation elected official, Congressman Mason has always promoted the Osage Nation government and its structure, (Mason) has continuously sponsored and supported legislation promoting the health, education and social services of the Osage Nation,” Edwards said in the resolution.

In his Congressional service, Mason was elected by his peers as the first Speaker and served from 2006 to 2010 and again in 2016. He has served on every Congressional committee and was elected chairman for the committees of health/ social services, education and government operations. Also during his tenure, Mason sponsored an appropriation bill to build the current Grayhorse village arbor in 2012 and sponsored a 2018 bill to appropriate an additional $1.1 million for costs to build a new Grayhorse community building, which is scheduled for completion this spring.

In the resolution, Edwards said: “Archie L. Mason serves as Head Committeeman for the Grayhorse I’lon-sch-ka Committee, has clan naming rights and is Cedar Chief for the Big Hill People, as senior member of the Mason family; and as a person of Osage and Cherokee descent, (Mason) has long advocated for and continues to support both Osage and Cherokee culture, language, history, life, values, customs, rituals and traditions and the Osage Nation is indebted to (Mason) for his life-long commitment to the Osage Nation, its government and its People.”

Congresswoman Maria Whitehorn said “it has been my pleasure to serve with Congressman Mason … when I was Speaker, he was a person I could depend on, rely on and if I needed to talk to somebody that would help me work my problems out, it was Congressman Mason and I will forever be grateful and thankful for the kindness that he showed to me.”

Congresswoman Alice Goodfox said Mason “helped to make us all better Congresspeople and we love you and we will miss you and we wish nothing but the best for you – God bless.”

Congresswoman Brandy Lemon said to Mason “there are not enough words to express my feelings … Your strength in the Good Lord also helps me know that we are heading in the right direction and you helped us get there, sir.”

Congressman RJ Walker recalls when he was first elected, he felt honored to serve with Mason. “It’s been an honor and a privilege, all these great things … your legacy will go on forever. Thanks, Archie.”

Congressional Speaker Joe Tillman thanked Mason “for your loyalty, your dedication, your first-class behavior as a gentleman, I have respect for you and admiration for you. Congressman Mason always said to the legislative body and to the Congressional members as we would meet here throughout the days that ‘this is our house! We are the legislative body of the Osage Nation’ and I will never ever forget that. I will miss you, my friend.”

In closing, Edwards, who was also elected in 2006 with Mason, shared a memory of the First ON Congress left with the task of building the Legislative Branch from scratch, which took “time and time and time again to put together and to figure it out and Congressman Mason was at the front and center of that … We spent 256 days working to get our government started, that commitment, that dedication that Congressman Mason gave has never wavered in 14 years of service.”

During the roll call vote on ONCR 20-15, all 12 members voted “yes,” with Lemon also voicing Mason’s famous “Amen!” he used at end of committee meetings he’s chaired through the years. After committee meetings – especially those stretching two or more hours – Mason concluded the meetings countless times by asking fellow members: “Those in favor of adjournment, signify by saying Amen!”

As for retirement from tribal office, Mason said he will still keep busy.

“New adventures and explorations await me and excite me,” Mason said. “My ‘bucket list’ is full. I may be old in years, but young in heart and mind. All my thanks go to Father God as he has blessed me and privileged me in the role of an Osage Nation Congressman. God Bless our Osage Nation and its people.”