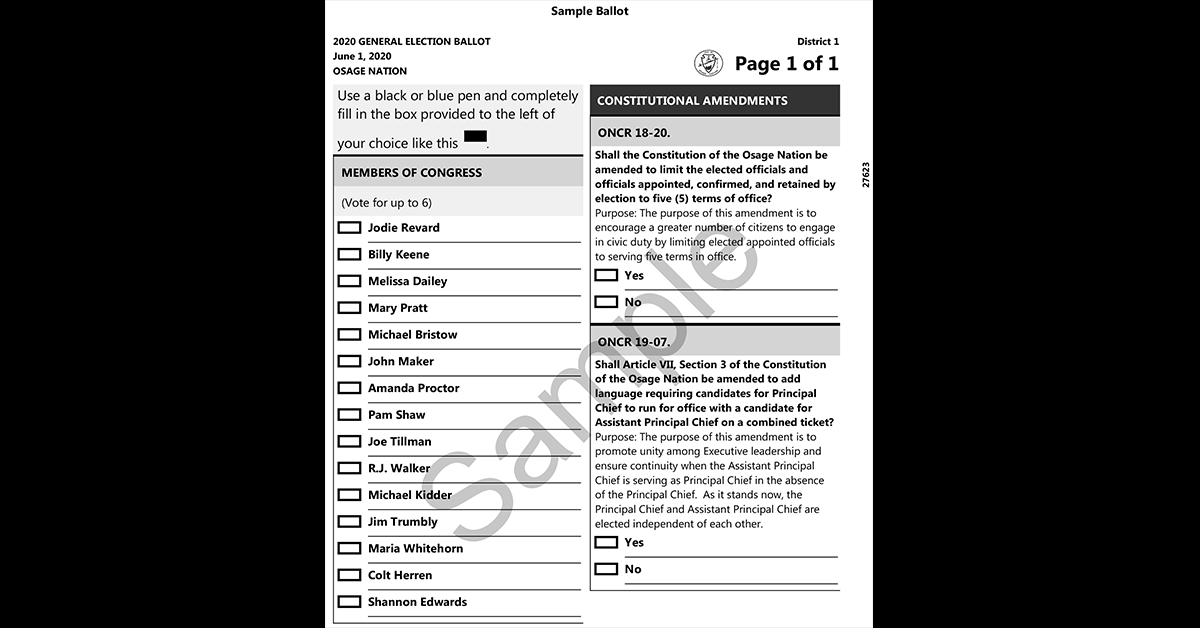 The 2020 Osage Nation General Election ballot language is set after the Wahzhazhe Election Board approved its language listing the 15 Congressional candidates and two constitutional amendment questions.

On April 8, the Election Board finalized the document language after reviewing a proof of the ballot, with two constitutional amendment questions seeking yes/ no votes and the names of the Congressional candidates seeking a seat on the Seventh ON Congress. Board members Shannon Lockett, Terry Hazen and Belle Wilson unanimously approved the ballot language.

The board reviewed a summary of the ballot language prepared by the Attorney General’s Office, which is charged with preparing the questions, according to the Nation’s election code.

Six of the 12 Congressional seats are opening up and those candidates’ names will appear on the ballot in the order determined by an Election Office drawing held in March. The ballot questions – approved by two separate ON Congressional resolutions in 2019 – concern whether term limits should apply to elected and retained offices in all three branches and whether the Principal Chief and Assistant Principal Chief should run for office on a combined ticket.

For constitutional amendments to pass, the questions must garner 65% of the “yes” vote, per the Osage Constitution.

The question and purpose of each question is listed as follows:

ONCR 18-20: Shall the Constitution of the Osage Nation be amended to limit the elected officials and officials appointed, confirmed and retained by election to five terms of office?

Purpose: The purpose of this amendment is to encourage a greater number of citizens to engage in civic duty by limiting elected appointed officials to serve five terms in office.

ONCR 19-07: Shall Article VII, Section 3 of the Constitution of the Osage Nation be amended to add language requiring candidates for Principal Chief to run for office with a candidate for Assistant Principal Chief on a combined ticket?

The next election year for the two Executive Branch offices will be in June 2022.

The Wahzhazhe Elections Office toll-free number is (877) 560-5286 and email address is electionoffice@osagenation-nsn.gov for election-related inquiries.