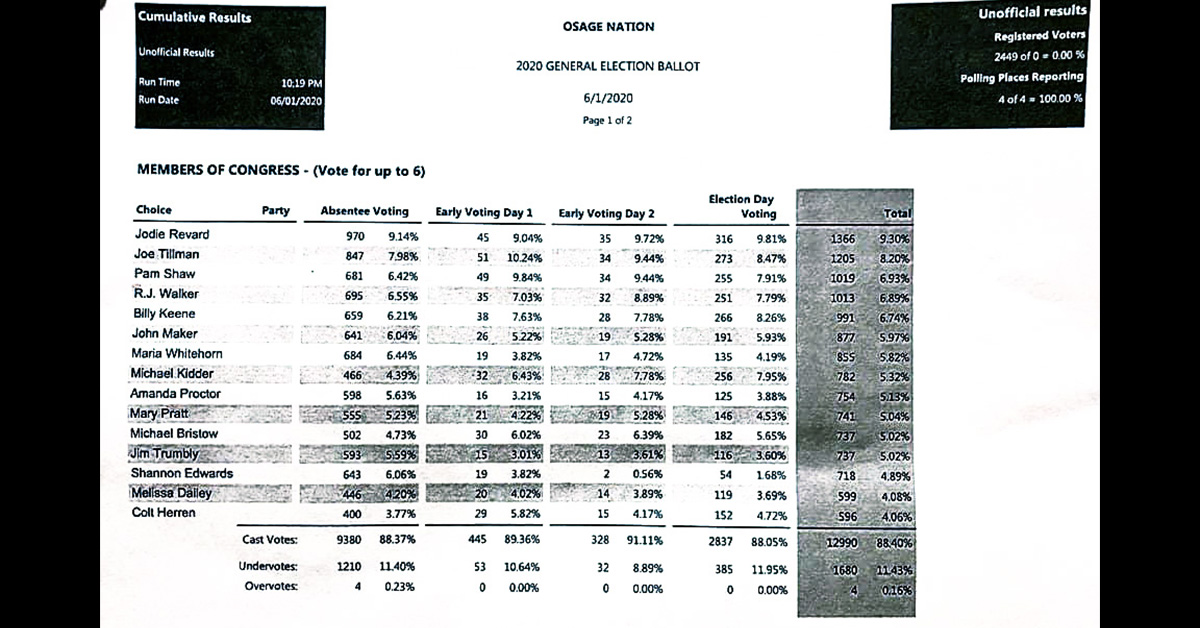 Photo caption: The unofficial results of the 2020 Osage Nation General Election on June 1, 2020.

All six Osages will join the six other incumbents to serve on the Seventh ON Congress when they take their oaths on Inauguration Day scheduled July 11 at the Tulsa Osage Casino Hotel.

Voters also passed a Constitutional amendment question (ONCR 18-20) which places limits of five office terms on Osage officials who are elected, appointed and retained by election in all three branches.

A separate Constitutional amendment question (ONCR 19-07) asking voters whether the Principal Chief and Assistant Principal Chief should run for office on a combined ticket failed.

Election results are unofficial until the Wahzhazhe Elections Board votes to certify them at a later date.

Election Supervisor Alexis Rencountre announced the unofficial results shortly after the Election Day workers and board members arrived at the Osage Minerals Council Chambers at approximately 11:15 p.m., which is more than three hours after the polling place closed at the ON Civic Center.

Afterward, the waiting crowd of candidates, their families and fellow community members applauded the results and extended well-wishes and congratulatory comments to each other as Rencountre attached printed copies of the results to the Chambers Building front windows.

According to the unofficial results, a total of 2,449 Osages voted in the 2020 General Election.

Rencountre said 537 Osages voted in-person June 1 on Election Day. During May 29-30 early voting days, a total of 143 voted. Minus in-person voters, the remainder of marked ballots came from 1,769 absentee voters.

Unofficial 2020 General Election Results and the number of votes received are:

Constitutional amendment questions require 65% of the “yes” vote in order to pass, according to the 2006 Osage Constitution.

- ONCR 18-20: Shall the Constitution of the Osage Nation be amended to limit the elected officials and officials appointed, confirmed and retained by election to five terms of office?

- ONCR 19-07: Shall Article VII, Section 3 of the Constitution of the Osage Nation be amended to add language requiring candidates for Principal Chief to run for office with a candidate for Assistant Principal Chief on a combined ticket?