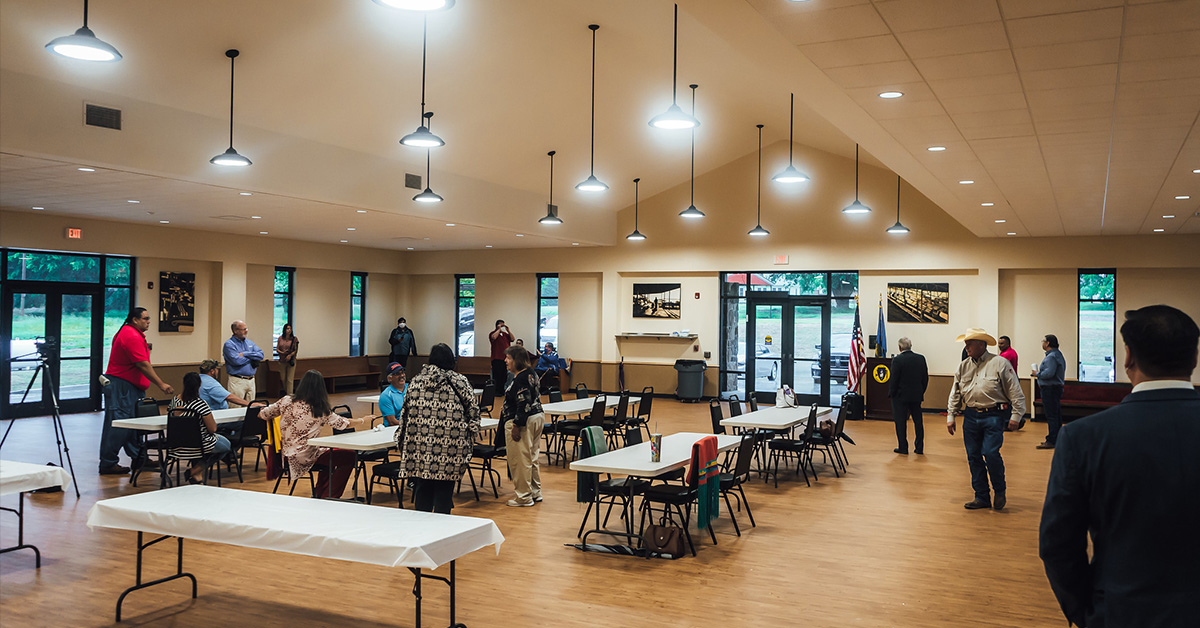 Photo caption: People gather inside the new Grayhorse community building for a ribbon-cutting ceremony on May 15, 2020. CODY HAMMER/Osage News

GRAYHORSE VILLAGE, Okla. – Community members and Osage Nation officials gathered here May 15 to celebrate the completion of the new community building built next to the roundhouse dance arbor.

The ribbon-cutting celebration comes nearly one year after many of the same individuals gathered for a groundbreaking ceremony on the new building to replace the former aging one that had roof damage and other wear-and-tear issues. Like the other two Osage districts, the Grayhorse Village community hosts events year-round at the building, including handgames, holiday parties, and cultural events including dinners when the village hosts its four-day Inlonshka dances each June.

Officials said the May 15 event was a celebration for the building’s completion and another dedication event would take place at a later date due to the COVID-19 coronavirus pandemic.

Approximately 40 people from the community and ON government gathered to hear celebratory remarks and to view the new structure built where the former building stood before it was razed following the 2019 Grayhorse Inlonshka.

Due to the COVID-19 pandemic, which prompted countless closures and disruptions of businesses and special event cancelations worldwide, the 2020 Grayhorse Inlonshka is postponed until later in the year.

Grayhorse District elder Jerry Shaw spoke during the event saying he is “proud and pleased, I think the old folks would be pleasantly surprised to see what we have here. We’re thankful to all those who had a hand in this (construction effort). It’s been a long time since we had something like this … We’re thankful to our old people – my folks, your folks – who made this possible for us. There was a time it looked like it was going to stop in the 1950s, but they didn’t let it because they wanted to save it for us, for our grandchildren and our great-grandchildren and I’m really proud of what we have here.”

According to the Tulsa-based construction contractor, Builders Unlimited, Inc., the new Grayhorse community building is roughly 8,500 square-feet, which doubled the former capacity. The project includes an industrial-style kitchen with new appliances, concrete-paved parking, outside lighting, a cook shack and outside drainage system for rainwater.

The celebration took place amid heavy morning rain that day and Principal Chief Geoffrey Standing Bear acknowledged the new building project’s drainage system. “And you can see the flow of water is just as it was designed to be and to get that far, we had to work with the architects and the village committee (five-man board) took the lead to work with all the people in this community and all the people in the Osage government,” he said.

“The No. 1 goal is to make this place the best it can be and you have really done it – Congratulations to all of you. When you go into that kitchen, I’m still looking for Martha Stewart, I know she’s back there somewhere because this is better than her kitchen on TV,” Standing Bear quipped.

Standing Bear also added: “It is a blessing to come here and visit again and to see what you have done and how all of us is going to enjoy this wonderful community, this sacred place and it’s very humbling and I thank all of you who have carried on – like our old folks want, they’d be so proud of this and our grandchildren who can see this and use this (building) for the future generations.”

Congressional Speaker Joe Tillman also applauded the new “beautiful facility” and the Village Committee and Grayhorse District cooks who were among the attendees. “There’s going to be a lot of celebrations here in this facility – celebrations of life, celebrations of individuals, dinners, births, and it’s going to be a place we can call home for the future generations that are going to occupy this building for the next 50-60 years,” Tillman said.

Acknowledging the COVID-19 situation, Tillman noted elders, including outgoing Congressman Archie Mason – also Grayhorse District Head Committeeman – could not attend out of health concerns and noted Mason sponsored the appropriation bill to build the current roundhouse arbor and one of the two appropriation bills to build the community building during his tenure.

Grayhorse Village Committee Chairman George Pease said the community members are still learning to use the building’s new features and appliances and acknowledged the other committee members who are Mark Bowman, Chuck Tillman, Judy Johnson and Carol Kliesen because “we all had a big part and we all knew what we needed to do to get this done.”

Pease also thanked fellow community member Scott Heskett “for his input and everything he’s done. It’s not just this building, it’s that arbor and using him as a resource, he lives just right over there, so it’s easy to go bother him and he doesn’t ever mind, he’s never turned us down. We just try to do our best and that’s what we’re here for,” he said.

The interior walls of the building contain several old photos of the village including the former dance arbor, which was demolished in 2012 to make way for the new roundhouse arbor. Pease said Keli Mashburn, a local Osage artist, created the photo artwork. He said a dedication ceremony for the building will take place at a later time.

Afterward, ON officials, the Village Committee, construction project officials gathered for the ribbon-cutting, conducted by ON Princess Leigha Easley.