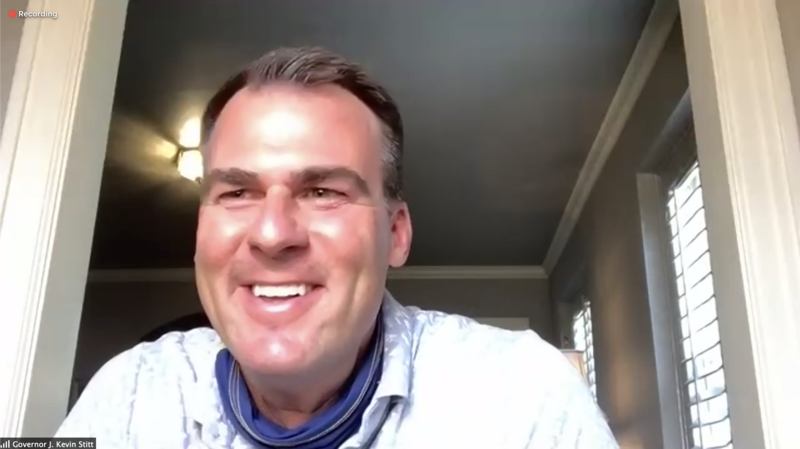 Photo caption: Gov. Kevin Stitt announces in a Zoom news conference on July 15 that he has tested positive for the COVID-19 virus. Courtesy Photo/Public Radio Tulsa

Addressing reporters via Zoom, Gov. Kevin Stitt announced that he tested positive on July 14 for COVID-19.

“It feels like an achy cold, but am basically asymptomatic,” he said. “Knock on wood, hopefully everything’s OK.”

The governor said he is isolating himself from his wife and six children, who have all tested negative for the virus.

Contact tracing efforts are underway to determine where the governor contracted the virus.

Given that Stitt did not start showing symptoms until July 11, Health Commissioner Lance Frye said it was highly unlikely that the governor contracted the virus while attending President Donald Trump’s rally at Tulsa’s BOK Center on June 20.

In an emailed statement, a spokeswoman for the Otoe-Missouria Tribe said event attendees were encouraged to wear masks, the guest list was limited and social distancing was incorporated in the seating.

“We take the recommendations of the CDC in regards to the prevention of COVID-19 very seriously and will continue to follow its guidelines,” spokeswoman Heather Payne said.

Later that same day, Gov. Stitt attended a funeral at Victory Christian Church for a Tulsa police officer killed in the line of duty. Few masks and minimal social distancing are visible in the pictures from the event posted to social media.

Despite testing positive, Stitt said he would not consider implementing a statewide mask mandate, calling such a move a “can of worms” that would be difficult to enforce. He also said he does not second guess his decision to not regularly wear one in public in light of his diagnosis.

“Obviously, if I knew I contracted it from not wearing a mask around someone, then absolutely,” he said. “But I don’t second guess things. I’m out walking outside, I’m at a baseball game with my kids, gassed up at a gas station and could have touched the pump. If you start second guessing, wondering all those things and how you got it…it’s a virus. It’s out there and we have to be cautious.”

After the press conference, Oklahoma City Mayor David Holt announced that the Oklahoma City Council will be considering a mask ordinance on Friday. Their counterparts in Tulsa are scheduled to do so as well on July 15.

Minutes after the governor’s announcement, the Oklahoma Department of Health confirmed that the state’s cumulative case count is now 22,813, a one-day increase of 1,075. Since July 1, the number of COVID cases in Oklahoma has increased by more than 7,000.

“We are watching the data closely and it is concerning to us,” Frye said.