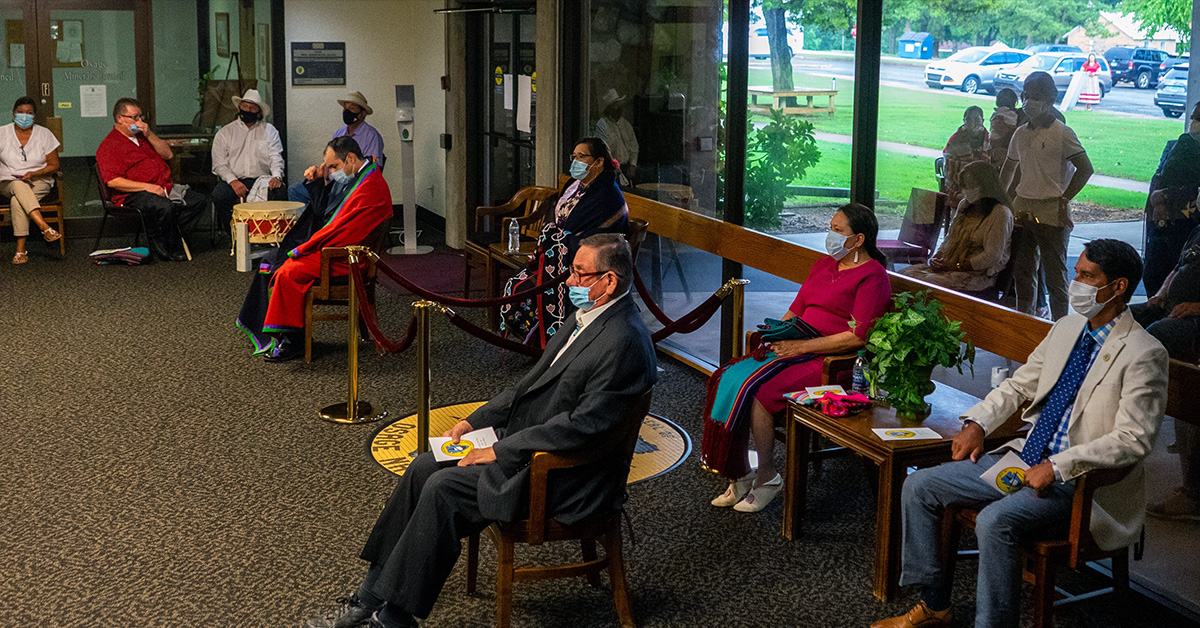 Photo caption: The six new Congress members were seated in the Minerals Council chambers building lobby and staggered, as per the health recommendations from the Wah-Zha-Zhi Health Center due to the COVID-19 pandemic. The ceremony was moved inside on July 11 due to morning rain. CODY HAMMER/Osage News

Despite requiring all individuals to test for the COVID-19 virus prior to the Osage Nation Congressional Inauguration, one individual tested positive following the event.

Members of Congress, Principal Chief Geoffrey Standing Bear and ON staff working the event were required to test for the virus. Family members of the Congress members and other attendees stayed outside the chambers and watched the ceremony from the portico. Masks were required.

“All planned attendees were tested for COVID 19 on July 9 and 10 and all tested attendees had negative results,” said Dr. Ron Shaw, Chief Medical Officer for the Wah-Zha-Zhe Health Center, in a statement. “However, there were three individuals who attended but were not tested prior to the event. One of the three individuals developed symptoms the next evening after the event and was tested at an outside clinic the following Monday and found to be COVID test positive.”

Since the tested individual was Osage the WHC contact tracer began investigations, Shaw said. The contact tracer studied video of the event to supplement gathered information and the appropriate individuals were advised to quarantine for 14 days despite the fact that they all wore masks, he said.

“The decision regarding who requires quarantine and who does not was based on CDC guidelines and level and type of exposure based on the conversations with attendees and the studied video record,” Shaw said. “At this point, no one needs to be tested unless symptomatic. Our contact tracer will advise those who require the 14-day quarantine.”

He said anyone who attended the Inauguration may come to the WHC drive on Wednesday, July 22, to be tested.

“The 7-9 day interval will optimize the detection of infected individuals without symptoms. Testing is not required unless you have symptoms,” Shaw said. “Should any attendee develop symptoms listed below, they should contact their medical provider for an appointment and /or arrange for testing.”

Principal Chief Geoffrey Standing Bear attended the Inauguration and, wearing a mask, placed Pendleton blankets on all six of the incoming Congress members. He said he and Assistant Principal Chief Raymond Red Corn have both been tested since the event and tested negative.

“One staff person from the Office of the Chief’s was quarantined because they came in contact with someone from another department who tested positive. Same with two others on the Executive team,” Standing Bear said. “None of the three tested positive and their quarantine ends this coming Tuesday. They have been working from home.”

Standing Bear said he has been tested three times since March and he and Red Corn have not tested positive. He said if he tests positive in the future that he will work from home unless too ill to work. At that point he would inform Red Corn, Executive Staff, the Congressional Speaker that Red Corn would be acting Chief.

With the rise in Coronavirus cases in Oklahoma, Standing Bear said he will meet with Shaw this week to consider a mask mandate for all the Nation’s employees.

Shaw said that the WHC is looking into publishing regular reports on the clinic’s efforts in testing and contact tracing.