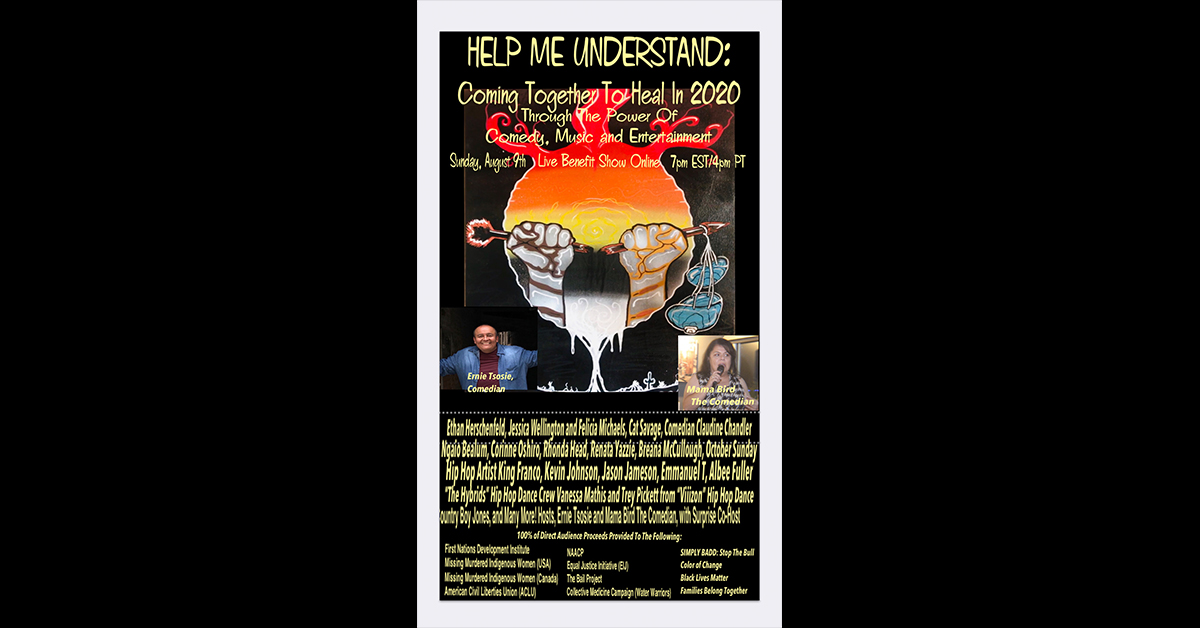 As the year 2020 progresses with countless newsmakers regarding the COVID-19 global pandemic and U.S. race relations, an Osage woman is part of a grassroots effort to produce an Aug. 9 virtual variety benefit show airing that Sunday evening.

The show is titled “Help Me Understand: Coming Together to Heal in 2020” and is slated to live stream starting at 6 p.m. CST featuring performers from various walks of life, talents and races including Native America.

The show’s talent acts include musicians, singers, comedians and dancers and its intent is to raise awareness of 12 non-profit organizations including the American Civil Liberties Union, Black Lives Matter and Native-focused organizations such as the Missing Murdered Indigenous Women (both U.S. and Canada chapters) and the First Nations Development Institute – and to encourage the public to directly donate to each of those entities.

Sheryl Gann-Hill (Osage) is a stand-up comedian who is directing the “Help Me Understand” show along with fellow organizers and comedian performers Ernie Tsosie (Navajo) and Ethan Herschenfeld. She said 25-plus acts are confirmed to perform during the virtual show, whether live from their respective locations or via pre-recorded performances that will air during the show.

The show will be live-streamed on social media platforms including the Facebook page “Help Me Understand: Coming Together in 2020,” which features biographies and photos of performing acts confirmed for the virtual show. Hill said she is still in talks and reaching out to other prospective performers to see if they are interested in participating in the show that could stretch three-plus hours.

“This is a variety show to bring support and even further awareness about the two biggest subjects happening in our country today – COVID-19 and Racism and it ties together our Indigenous and our Black brothers and sisters,” Hill said.

Hill, who recently lived in California and Albuquerque, N.M., started performing stand-up comedy shows in 2016 and is also scheduled as a show performer during the virtual show. While in New Mexico, Hill performed as “Mama Bird the Comedian” and collaborated with local comedian Cat Savage and the duo performed stand-up acts together.

Non-white performing comedian and music acts coming from African American, Jewish and Latino backgrounds are listed on the show lineup showcasing the diversity of talents who are participating in the virtual show for free.

“We’re making a statement with the show through comedy and entertainment,” Hill said. “We’re getting together to say, ‘help me understand’ and we’re sharing that with you.”

When the show planning started, Hill said it was an initial effort to raise money – in wake of COVID-19 – for supplies and relief including drinking water to Native communities, including the Navajo reservation, where many families live in rural areas where there is no running water facilities, leaving people to haul in potable water. But as 2020 continued and breaking news headlines included the high-profile killings of George Floyd and Breonna Taylor by police officers and Canadian police brutality reports against First Nations people, then the virtual show’s purpose expanded.

“We’re ready to heal, we’re ready to put an end to this social/ racism pandemic and bio-pandemic,” Hill said. “This is not a one-person show, I’ve expressed that to every performer I’ve talked with. I told them to ‘tell the people this is our show.’”

Hill noted the show will contain adult content matter and all performers are participating free of charge. Hill said she and the organizers are not accepting monetary donations but are encouraging those interested to directly reach out to each of the 12 promoted organizations and donate at least $1 to each of them.

Those represented organizations are:

4)    National Association for the Advancement of Colored People (NAACP)

The “Help Me Understand” virtual show will be broadcast on the following social media platforms:

Hill said a second virtual variety show is scheduled for Feb. 28, 2021. For more information on the “Help Me Understand” show, email helpmeunderstandbenefitshow@gmail.com