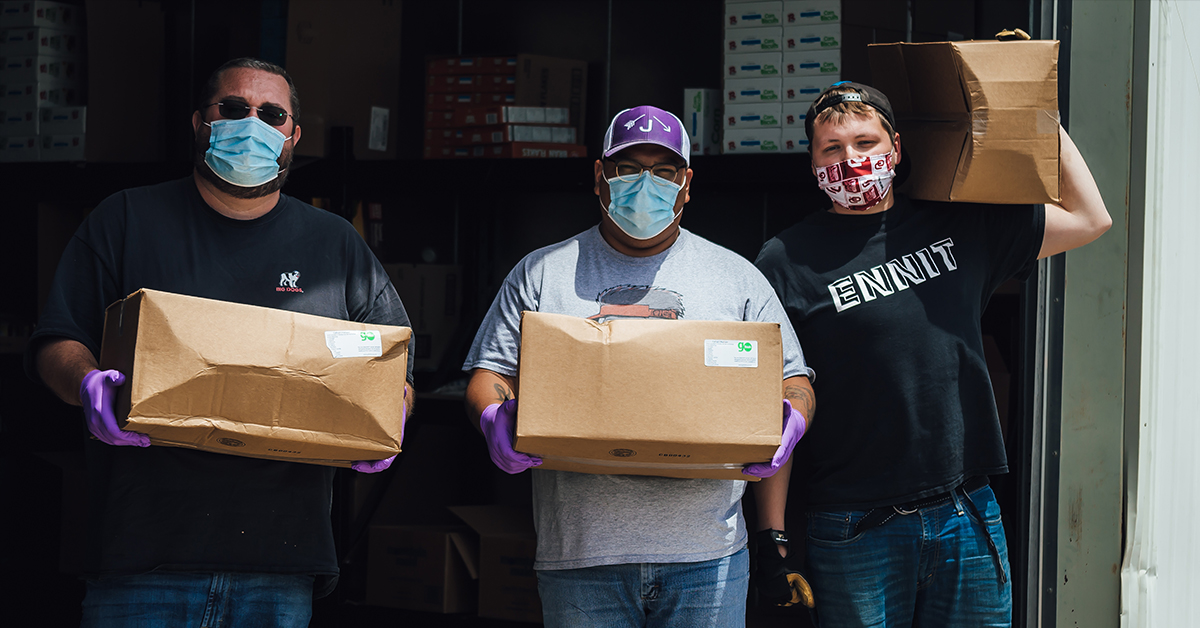 Since May, hundreds of families and residents in Osage Nation communities are recipients of free food boxes distributed as part of the USDA Farmers to Families Food Box program launched in wake of COVID-19.

The Nation’s Food Distribution Program accepted the USDA Farmers to Families Food Box project on May 19 and received an initial shipment of 500 boxes from Tulsa-based GoFresh, said Fi Davis, ONFDP director. The cardboard boxes contain a variety of dairy, fruit and vegetable produce available to community members who stop by the ONFDP warehouse in Hominy when the boxes are delivered.

Davis said the Nation is scheduled to receive shipments of food boxes weekly through August from GoFresh. Those boxes are available for pick-up at the Food Distribution warehouse located at 20 Sun Avenue in the Nation’s Industrial Park during business hours. Days and times vary.

“The Nation benefits by giving to the community and providing for the needy throughout the reservation,” Davis said. “The purpose of the program is to assist all that are affected by the pandemic. It certainly makes families that pick up these boxes very appreciative.”

To date, Davis said a total of 7,000 food boxes have been given out to Osage County families. He noted that on May 12, the food box shipment increased to 1,000 and half of the shipment started going to the Assembly of God Church in Wynona on June 30 where those food boxes can be picked up by community members free of charge while supplies last.

According to the USDA website, the Department “is exercising authority under the Families First Coronavirus Response Act to purchase and distribute agricultural products to those in need. Through this program, USDA’s Agricultural Marketing Service (AMS) is partnering with national, regional and local distributors, whose workforces have been significantly impacted by the closure of restaurants, hotels and other food service businesses, to purchase up to $3 billion in fresh produce, dairy and meat products from American producers of all sizes. The program will supply food boxes of fresh fruits and vegetables, dairy products, meat products and a combination box of fresh produce, dairy or meat products. Distributors will package these products into family-sized boxes, then transport them to food banks, community and faith-based organizations, and other non-profits serving Americans in need.”

According to GoFresh’s website, the Tulsa distributor also announced its extended partnership with USDA to continue participating in the Farmers to Families Food Box program during the months of July and August.

GoFresh said it delivered approximately 2 million food boxes and more than 50 million pounds of produce and dairy foods to American families during the months of May and June. Aside from the Osage Nation, other regional entities receiving food box shipments from GoFresh include food banks, nonprofit charities and other Native American tribes.

In a July 24 USDA news release, the U.S. Secretary of Agriculture Sonny Perdue announced a third round of Farmers to Families Food Box distributions will occur starting in September with completion by Oct. 31.

For more information on the ON Food Distribution Program, call (918) 287-5428 or visit its website at: https://www.osagenation-nsn.gov/what-we-do/food-distribution-program