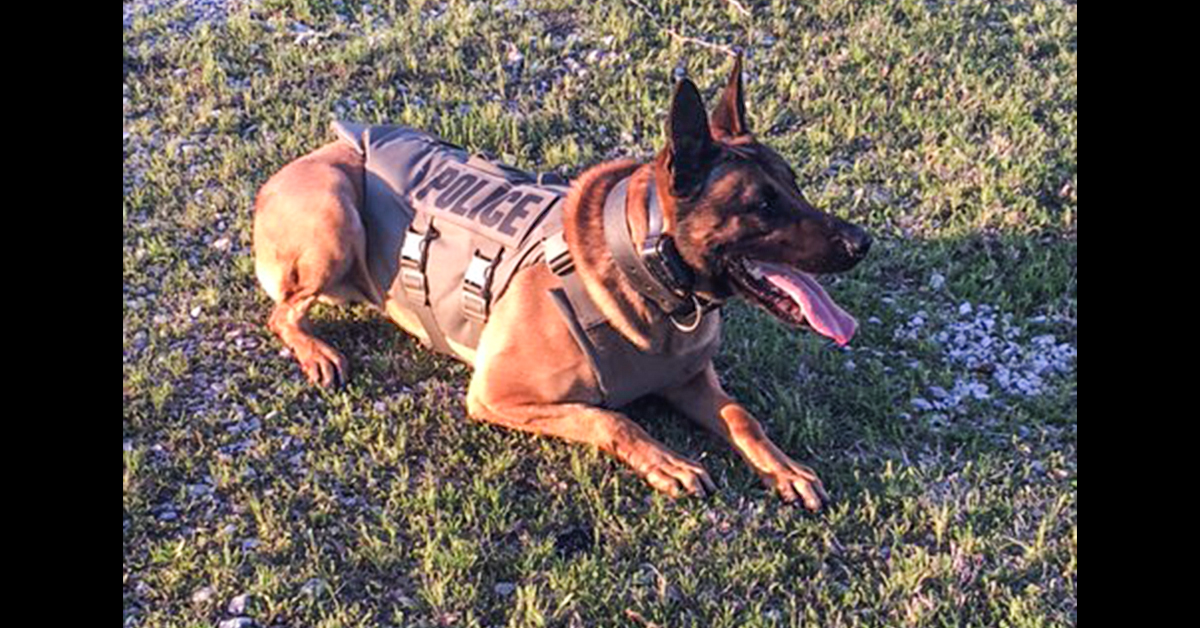 Photo caption: Given to the Osage Nation Police Department in 2015, Arc is the ONPD's narcotics dog and was instrumental in apprehending three suspects after a high-speed chase Sept. 2, 2020. Courtesy Photo

ON Police Chief Nick Williams said they heard about the chase over the CB Radio and the city and county law enforcement were asking for assistance, specifically a K9 Unit. He learned it was three juveniles, two males and a female, they had two rifles in the vehicle and there were three shots fired. Pawhuska Public Schools and the Osage Nation Campus immediately locked down.

He called off-duty ONPD Officer Patrick Luey, who is the K9 handler, to report to the scene of the crash as the three suspects had fled on foot. Within 10 minutes, Luey and the Nation’s narcotics dog, Arc, were on the scene.

“Within 20 minutes on the scene, Arc had found their trail, found their property and led the officers to the three juveniles. They were located, Officer Luey and Arc had them pinned down and law enforcement swarmed in and arrested the juveniles,” Williams said. “Within 10 minutes after the arrest, they searched the area for two missing firearms, which have been located. A pistol and a shotgun. Arc found them all.”

Williams said local law enforcement is conducting an investigation into the shots fired. The three juveniles were not from Pawhuska. The female juvenile is from Florida and is currently in DHS custody, one of the male juveniles is from the Tulsa area and the other male juvenile was recently released from the Osage County Detention Center.

“I’m very proud of my officer and his handler. That’s awesome, that’s what he’s supposed to do, that’s what he’s trained for. That’s why we have him,” Williams said. “He was ready to attack them, he’s a bite dog. Due to the juvenile requirements of when they were found, he snarled at them and bared his teeth and that was enough for them to come out.”

The three juveniles were found hiding underneath a box trailer behind a residence on 16th Street and Big Chief, next to an abandoned structure, he said.

Arc is short for his Belgian name of Arrak. He is a 7-year-old Belgian Malinois that is trained to search for methamphetamine, cocaine, heroin and marijuana. Arc can track, locate, apprehend, and bite on command. He wears a bullet and stab protective vest, thanks to a charitable donation from a nonprofit organization called Vested Interest in K9s, Inc. in 2017.

The son of a four-time KNPV Champion, the Netherlands top police dog competition, Arc was trained in Belgium but responds to all commands in English. He is cross-deputized and rides across the Osage reservation with Luey. Arc has his State of Oklahoma CLEET CDS Detector K9 Team License. The ONPD received Arc in 2015.

“Arc was funny after the arrest; he knew he did a good job. There was a water puddle nearby and he just jumped right in and cooled off,” Williams said. “I told his handler to give that boy his treat. He needs a steak dinner now.”