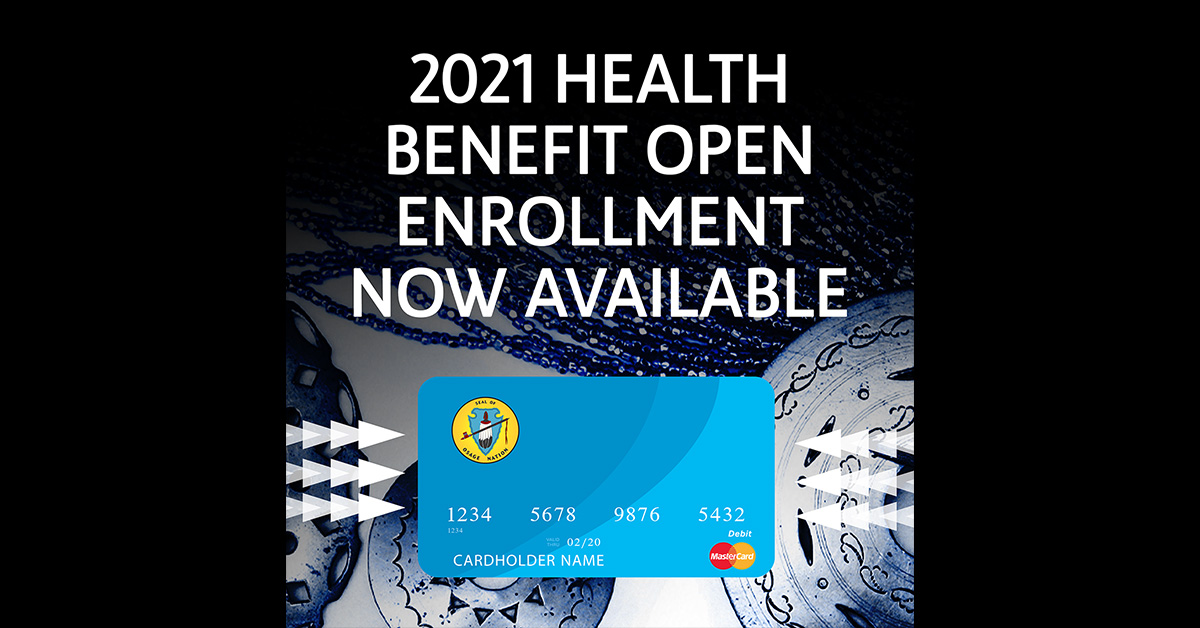 The Seventh ON Congress passed an amendment to the Health Benefit Act (ONCA 20-79 sponsored by Congresswoman Jodie Revard) during the 2020 Tzi-Zho Session establishing the annual enrollment period starting Oct. 1 and ending Dec. 15 for all Osages to enroll or reenroll in the health benefit plans for the next calendar year.  The bill passed with an 8-4 vote on Sept. 23 and Principal Chief Geoffrey Standing Bear signed the bill into law afterward.

Revard said this amendment “does not reduce the amount our citizens receive” and she believes the annual enrollment deadline would help make the health benefit plans “more manageable” and the bill was also discussed during Congressional Health/ Social Services Committee meetings in the session. She noted in the bill that health benefit enrollment applications may be accepted past the deadline from applicants experiencing life events such as the birth of a child or legal adoption of a child or being named a person’s guardian by a court of law.

Jason Zaun, Chief of Staff for Standing Bear’s office, said the Executive Branch also supported an enrollment period for the health benefit plans, adding that any changes to the health benefit law must be made by Congressional act. He noted in past years there were fluctuations in the number of enrollments per month with no deadline in place.

Usage of the Nation’s health benefit plans has grown 365% over the last decade since launching, Zaun said. With the December enrollment deadline in place, Zaun said that would allow time to start running reports in January on the number of applicants.

For example, Zaun said in past years there would be reports of 600 enrolled during March, 800 in April and 780 in May. Also with no enrollment deadline in place, Zaun said it’s possible for a new applicant to apply on Dec. 1 of that year, receive a health benefit card by Dec. 15 and then have two weeks to spend that current year’s $500 limit before it become part of the person’s rollover balance for the next calendar year.

The enrollment deadline requirement comes as the Seventh ON Congress meets for its first regular session following the June 2020 election and also as discussions continue on how to move forward during the COVID-19 pandemic. The Congress and its committees also continued to discuss and consider the 2021 fiscal year budgets as the Sept. 30 deadline neared, which also includes the various direct services offered to Osage constituents.

The annual amount each approved Osage health benefit plan applicant receives is $500 for those age 64 and younger. Osages age 65 years and older receive $1,000 annually. Osage elders participating in the Medicare Plan F/Part D program will not be eligible for the health benefit card. Members can only participate in one benefit or the other.

During discussion and debate on ONCA 20-79 before the vote, Congressman Eli Potts said he is against the amendment citing the ongoing COVID-19 pandemic. Congressman RJ Walker also opposed the change, noting “I feel it’s our job to help those in need to get the benefit.”

Congresswoman Brandy Lemon, who is the current health/ social services committee chair, said she supports the change noting there are other deadlines in everyday life, including employee benefits. “I don’t think it’s asking too much of our people,” she said.

Congresswoman Alice Goodfox also agreed, noting “I think it’s a moving target” with no health benefit enrollment deadline, which “makes it difficult for processing forms and appropriating money.” In 2019, the Congress approved an $8 million appropriation for the health benefit fund for Osages under age 65 and $4.5 million for elders health benefit plans.

The 2021 Health Benefit Enrollment period is now open. The deadline to apply is Dec. 15, 2020 by midnight. To apply click on this link: https://www.osagenation-nsn.gov/member-services/health-benefits-information